The expansion of the Universe stretches the wavelengths of photons, causing spectral lines to shift to longer (redder) wavelengths. The redshift of a source is thus a measure of its distance, and the epoch at which the light was emitted. The frontier for spectroscopically-confirmed galaxies is currently at a redshift of around 8, when the Universe was a little over 600 million years old, and plausible candidates have been identified as far back as z = 11, but have not yet been confirmed.

The motivation for finding and studying the most distant galaxies is three-fold. Firstly, astronomers are inspired to undertake a census of the first galaxies seen in the first few hundred million years after the Big Bang. This curiosity for exploration is fundamental to science and has driven astronomy to major discoveries in the past; it also excites great public interest. Secondly, and more fundamentally, hydrogen in intergalactic space is ionized by a redshift of about 6, whereas it was fully neutral soon after the time the microwave radiation emerged. At some point there was a landmark event called cosmic reionization, akin to a phase transition in the intergalactic medium (IGM), when hydrogen became ionized. Most astronomers suspect this event was closely related to the birth of the first galactic systems that released copious amounts of ionizing ultraviolet photons. Prior to reionization, hydrogen was still in atomic form and the Universe was devoid of any light emitting celestial sources – a period commonly termed the Dark Ages. Pinpointing when and how the Dark Ages ended, and finding the sources responsible for cosmic reionization is necessary to complete the story of galaxy evolution. Thirdly, the physical processes which accelerate or inhibit the cooling and collapse of hydrogen gas clouds into young galaxies at these early times provide the seeds from which later, more massive, galaxies such as our own Milky Way assembled. Although theory makes predictions of how these early systems grew and evolved, it is currently not directly tested by observations. 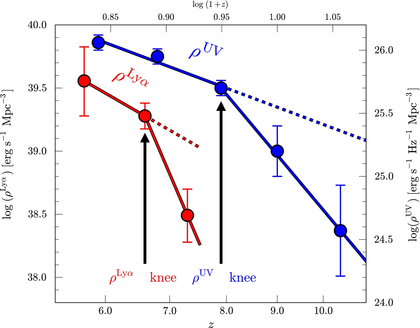 It is thought that the first luminous objects, forming from primordial hydrogen and helium, include giant short-lived stars, perhaps more than 200 times more massive than the Sun (Hirano et al. 2014). Their number and brightness is uncertain, but they may well be too faint to see with JWST or TMT, even if they lie in an accessible redshift range (redshift z < 20 for TMT; at higher redshift, Lya shifts beyond the K-band window, and there will be no light detectable by ground-based optical/infrared telescopes). As gravity inexorably forces larger hydrogen clouds to cool and collapse, low mass galaxies will begin to shine. Calculations taking into account the transfer of UV radiation from these early galaxies through the IGM suggest that “bubbles” of ionized gas will develop around each prominent source. The bubbles will enlarge and eventually overlap, completing the process of cosmic reionization.

When might this have occurred? The patterns of temperature and polarization signals from microwave background photons detected by the WMAP and Planck satellites suggest that the free electrons responsible reside in ionized gas in the redshift range 8 to 20 (Ade et al. 2014a). Thus it is quite likely there will be an abundance of energetic, UV-luminous, star-forming sources in this interval that are responsible for this reionization. However, it is not yet known if reionization was an instantaneous or protracted event, or whether the ionizing radiation comes from a highly abundant distribution of feeble sources, or a rarer population of brighter, more massive galaxies. Some cosmologists suspect there may also be ionizing contributions from black holes or decaying particles (e.g. Pierpaoli 2004). Only by locating and carefully studying the UV-emitting sources in this era can these important questions be answered.

Soon after the first sources emerge, the heated neutral hydrogen begins to glow more brightly than the microwave radiation. Powerful radio telescopes and interferometers now being planned should trace the topology and growth of the bubbles around these sources by mapping selected regions of the sky using the redshifted 21cm emission line of hydrogen. However, although low frequency radio surveys may improve our knowledge of when cosmic reionization occurred, they will not detect the sources responsible. Our physical understanding of the process will thus rely crucially on observations with JWST and TMT.

JWST should certainly be able to detect the brightest sources lying within each ionized bubble. However, TMT, with adaptive optics, will be able to detect and study objects an order of magnitude fainter. The gain will be particularly dramatic if, as expected, the earliest sources are physically small. TMT may also find the signatures of the much sought-after, chemically un-evolved, “Population III” sources expected at these early epochs. In general terms, therefore, we can expect the role of TMT to be one of providing a more detailed story of the properties and influence of earliest sources on the intergalactic medium, building on the basic progress made with radio surveys and JWST.

The following subsections introduce several areas where TMT is likely to make a profound impact in its early years in addressing the physical processes in conjunction with the next generation facilities such as JWST. Inevitably, given how little is known about the properties of the early stellar systems and their contributions to cosmic reionization, the quantitative details are more speculative than in other areas of this document. Flexibility in survey strategy will be crucial as more is learned about this uncharted era. Some of the performance uncertainties are discussed in terms of both the unknown size and abundance of star-forming sources.

Angular Sizes and the Synergy with JWST and Future Space Missions

Over the last 20 years there has been a vital synergy between HST and ground-based 8-10 meter class telescopes: resolved imaging from space, and deep spectroscopy from the ground. The relationship between JWST and TMT will be somewhat different, although just as important. Both TMT and JWST have impressive imaging and spectroscopic capabilities. JWST has the advantage of a reduced near-infrared background in space, and its sensitivity at wavelengths longer than 2.5 microns provides sensitivity to galaxies at redshifts beyond 20. However, TMT has a much larger collecting area than JWST, and superior angular resolution (a factor of 5 higher) with AO-fed instruments, offering greater sensitivity for physically small, faint galaxies. TMT can resolve and study finer structures in galaxies than is possible with JWST. Unlike HST, JWST will offer sensitive multi-object spectroscopy with low to moderate spectral resolution (up to R = 2700 for JWST NIRSPEC), and at longer wavelengths, without atmospheric limitations. The higher resolution of TMT spectrometers will improve detection limits for narrow emission and absorption lines, and offers velocity resolution that JWST cannot match.

Based on their expected timetables, TMT will see first light after the 5 year nominal lifetime of JWST operations. TMT observing programs will thus follow up galaxies detected in well-established JWST surveys, and study them in ways that JWST could not. TMT will be contemporaneous with future space missions that provide wide-field near-infrared survey capabilities, such as EUCLID (ESA), WFIRST (NASA) and WISH (JAXA). These will also supply an abundance of distant galaxy targets for TMT follow-up.

As TMT observations in this regime will be background-limited, the sensitivity is a strong function of source angular size. For extremely compact sources that are unresolved or only marginally resolved, corresponding to objects smaller than ~1kpc (200 mas at z=7) in their size, TMT will detect the continuum emission from the object with a S/N that is greater than can be achieved with JWST’s NIRSPEC at R=1000 and 2700 and greater than 60% of the S/N achieved with NIRSPEC for R=100. Note that HAB =27 corresponds to 2.3L* at z=8, objects at the bright end of the luminosity distribution, and to 5.2L* at z=10 if the luminosity evolution from z=6 to 8 is extrapolated to z~10. If the galaxies are resolved to ~200mas, which appears to be the case from the HUDF studies, TMT will still be able to detect the continuum of HAB ~27mag source with S/N>10 in a 10hr integration with wavelength binning to R~400. 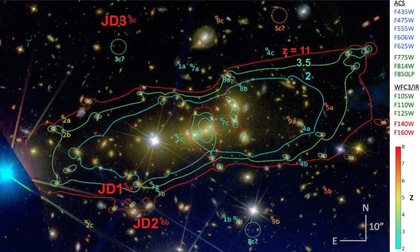 A massive galaxy cluster, MACS J0647.7+7015, acts as a powerful gravitational lens, producing three highly magnified images of a background galaxy estimated to be at a redshift z = 10.7. HST image of the cluster, from the CLASH survey, with the critical magnification lines at various redshifts (2, 3.5 and 11) indicated.

Detecting galaxies at z > 6 is challenging, not only due to the large distance to these objects (which makes them faint) but also due to the fact that galaxies had few stars when they first formed, meaning that they emit less light regardless of their distance. To overcome this problem one can use galaxy clusters as cosmic telescopes that, similar to ordinary glass lenses, magnify objects behind them. These cosmic telescopes allow us to find and study a unique set of faint, high-redshift galaxies, achieving an order-of-magnitude gain in sensitivity and spatial resolution over blank-field surveys. In addition, the detected sources behind a cluster lens are magnified in apparent size, allowing us to probe order of magnitude smaller physical scales. Several large campaigns are now underway to take advantage of this, particularly CLASH (Postman et al. 2012) and the Hubble Frontier Fields (HFF). The first results from these surveys are extremely encouraging. Not only did they deliver the current record holder in redshift space (z=10.7, Coe et al. 2013), these observations allow us to push the intrinsic luminosity limits further than the UDF and study properties representative galaxies at z ~ 7 and 8. For example, one can detect these galaxies with Spitzer and measure mature stellar populations as far as z=9.5 (Zheng et al. 2012, Bradac et al. 2014). TMT/IRIS imaging of clusters will discover and resolve star forming regions in lensed objects more efficiently than even the HFF and CLASH.

Targeting sub-L* LBGs spectroscopically at z ~ 7 is very difficult in blank fields due to their faintness. Indeed, the only spectroscopically detected sub-L* galaxies at z > 6.5 to date are z=7.045 galaxy from Schenker et al. 2012 and a z=6.740 galaxy from Bradac et al. 2012. Both of these galaxies are lensed by a foreground cluster (A1703 and the Bullet Cluster, respectively), confirming the power of cosmic telescopes. Increasing the sample size is crucial, because with measurements of the equivalent-width (EW) distribution in Lyα Emitters (LAEs) we can distinguish between effects of ISM dust and neutral IGM and study the epoch of reionization (Treu et al. 2012, 2013). We expect different EW distribution for sub-L* and >L* populations respectively if reionization is playing a role at these redshifts (Stark et al. 2010). The main missing observational ingredient is a measurement of the EW distribution for both luminous and sub-L* galaxies at the redshifts of reionization. Cosmic telescopes allow us to probe the sub-L* regime particularly efficiently. However, despite the magnification, spectroscopic redshifts have been measured for only a handful of sources close to the reionization epoch. Lyα may be disappearing due to the increasing opacity of the intergalactic medium at z > 6. TMT detections for much weaker high-excitation emission lines like CIII] 1909 may be the most effective means to measure redshifts for these gravitationally lensed galaxies.

TMT will revolutionize the field and offer the best capabilities for such studies. In particular IRMOS, with its multiplexing capabilities will allow for an efficient follow up of galaxies behind cosmic telescopes. The one hour, 10-sigma TMT/IRMOS detection limit is ~1041 ergs s-1. With assistance from lensing we can however push these limits by an order of magnitude lower and study 0.1L* Lyman Break Galaxies spectroscopically. Such systems will have a star formation rate of much less than 1 solar mass/year. TMT will give us an answer to whether these seeds of today's galaxies are responsible for reionizing the Universe and what the topology of this process was. It will also allow us to explore galaxies and their stars in great detail from the time when the Universe was only a few percent of its present age.

The science case for each science theme is developed and implemented by a dedicated international science development team (ISDT). Scientists from around the world interested to join a particular ISTD should contact the respective convener.

How to Join a TMT ISDT?