One of the most exciting areas of current research lies at the interface between theoretical and high-energy physics and cosmology. Indeed, the discovery of dark matter and dark energy result from astrophysical observations of the Universe. It is these kinds of careful quantitative cosmological and astrophysical measurements that offer the greatest promise for constraining fundamental physical theories. TMT will contribute in this area by providing highly accurate measurements of the most distant sources, large samples of objects probing the Universe at intermediate distances, and precise studies of the dark matter in nearby and distant objects.

The Nature of Dark Matter 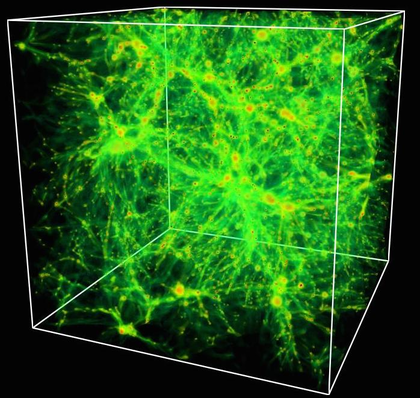 Dark matter structure at z ~ 3. TMT will probe multiple lines of sight using WFOS and background galaxies as sources. This will provide a more complete understanding of the baryonic power spectrum and interaction of the IGM with baryonic matter in galaxies. (Credit: R. Cen, Princeton U.)

There is now incontrovertible observational evidence that the main mass component of the Universe is in the form of “dark matter” that interacts extremely weakly with atoms and photons. In the standard paradigm, non-interacting dark matter controls the clustering of dark matter, making it a tractable computational problem in which the initial conditions and the evolution equations are known once the nature of dark matter has been specified. Simulations can then be contrasted with the observed galaxy clustering pattern to shed light onto the properties of dark matter. This has led to a scenario where dark matter takes the form of elementary particles that emerge from the early Universe with negligible thermal velocities and a scale-free distribution of Gaussian density fluctuations. Coupled with a “dark energy” field that governs the late expansion of the Universe, this “Cold Dark Matter” (ΛCDM) paradigm has now matured into a full theory without tunable parameters, from which detailed theoretical predictions are possible. These predictions have been successfully verified on large scales (>1 Mpc), but the situation is far less clear on the scale of individual galaxies, where the ΛCDM model is challenged by a number of problems. The rotation curves of dwarf galaxies, for example, seem at face value inconsistent with the cuspy dark matter halos predicted by cosmological simulations. Further, ΛCDM predicts a number of low-mass dark matter halos that far exceeds the observed number of faint galaxies. Although some see these challenges as signaling the need to abandon the paradigm, others argue that observations can be accommodated within ΛCDM once the effects of baryons on the scale of dwarfs are properly included. This is a complex problem that is far from solved, and best approached by following multiple lines of enquiry. Despite its complexity, progress has been steady and breakthroughs seem within reach. TMT can play a key role in enabling these breakthroughs by placing definitive constraints on the mass profile of dwarf galaxies and enabling the detection of dark substructure in gravitationally lensed-systems.

Our knowledge of the strong and gravitational forces, among the four fundamental interactions conventionally recognized, is relatively incomplete. TMT can improve our understanding of both forces by constraining the equation of state of extremely-dense matter and testing gravity theory with neutron star (NS) binary systems.

The measurement of NS masses provides clean and tight constraints on the state of dense matter at supranuclear density, and has profound implications on the nature of the strong interaction. However, up to now, all accurate mass measurements are from observations of binary pulsars. Gravitational microlensing has been proposed as a possible way to measure the mass of isolated NSs, and it has been highlighted that microlensing events due to pulsars could be predicted based on pulsar proper motions obtained through radio observations (Dai et al., 2010). The latest large radio telescopes, such as FAST and upcoming facilities like SKA, will discover thousands of new pulsars and determine their distances and proper motions; deeper optical surveys, such as WFIRST and Rubin Observatory, will provide billions of background sources. Therefore, it will become possible to predict potential microlensing events due to NSs, and further confirm and monitor them with radio telescopes (of order a few events per year can be expected from a dedicated monitoring campaign). With TMT's extremely-high sensitivity and high-precision astrometry (~0.1mas), we would be able to detect weak microlensing phenomenon or provide precise measurements, and then determine isolated NS masses (Tian & Mao 2012).

White dwarf-neutron star systems provide test-beds for gravity theories. By modeling the optical spectral lines of the white dwarf (WD) and high-precision radio pulsar timing, the masses of components in WD-NS binary systems can be determined independently of gravity theory, which makes WD-NS systems unique laboratories to test theories of gravity in strong-field regime (Freire et al. 2012; Antoniadis et al. 2013). The high spectral line sensitivity and resolution of TMT will greatly increase our sample of WD-NS systems and provide precise mass measurements of the binary components. By combining the derived masses with additional post-Keplerian parameters from radio timing, we will be able to probe various aspects of alternative gravity theories. Wide-orbit WD-NS systems are ideal systems to test strong equivalence principle, while tight-orbit WD-NS systems have proved to be extremely useful in probing the local Lorentz invariance of gravity (Shao & Wex, 2012).

In addition, the optical emissions from NSs carry important information about the underlying radiation processes in strong magnetic fields and hence the nature of NSs. Normally, the optical emission is weak, and only about 20 NSs have been observed in UV/optical/IR so far. However, it has been discovered that the optical/UV fluxes exceed extrapolations of X-ray blackbody emission (Tong et al., 2011) thus may reveal some new physical processes. Large optical telescopes, such as TMT, will be necessary to make breakthroughs in this field. 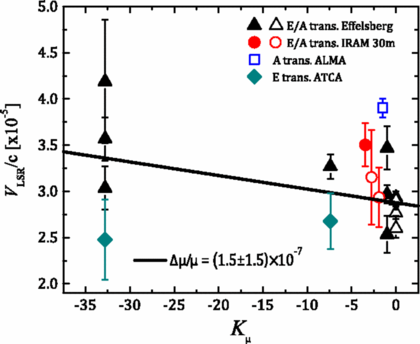 Measuring alpha. Wavelength residuals seen in QSO spectra vs. sensitivity coefficient. The slope indicates a variation of the ratio of the masses of the proton and electron (Bagdonaite et al. 2013a,b, 2014)

In a large class of fundamental theories, the four-dimensional Universe that we observe emerges from a higher-dimensional space time. In such theories, the fundamental physical constants, such as the fine structure constant and the electron-to-proton mass ratio, are expected to be time dependent (see Uzan 2007 for a review). Time variation of fundamental parameters is also generic in cosmological models of quintessence. It is possible to search for and constrain any such variations of the constants by accurate measurement of wavelengths of absorption lines seen in the spectra of quasars (Webb et al. 1999). Past observations have been inconclusive. More than a decade of study using 8 and 10-meter telescopes to constrain evolution of the fine structure constant has yielded mixed results (e.g. Murphy et al. 2003, Chand et al. 2004, Tzanavaris et al. 2005, Reinhold et al. 2006, Molaro et al. 2013). There has been recent tantalizing evidence for a variation in the electron-to-proton mass ratio (see figure). These observations have been limited both by signal to noise ratio, and by identification and control of systematic errors (Murphy et al. 2007). While both of these limitations need to be addressed, it is clear that signal-to-noise ratio provided by the current generation of 8-10 m telescopes is at best marginal. In the same amount of observing time, TMT with HROS would provide a three-fold improvement, providing a statistically definitive result. Combining TMT observations with results from other probes such as CMB power spectrum analysis (Ade et al. 2014b), galaxy clusters (Galli 2013), or primordial nucleosynthesis (Coc et al. 2012) promises to set limits on the order of 10-4 on the variation of a , and of 10-3 on the variation of the electron mass over the past 13 billion years.

The science case for each science theme is developed and implemented by a dedicated international science development team (ISDT). Scientists from around the world interested to join a particular ISTD should contact the respective convener.

How to Join a TMT ISDT?
Fundamental Physics & Cosmology