The InfraRed Imaging Spectrograph (IRIS) is a “workhorse”, first light instrument for the Thirty Meter Telescope (TMT). IRIS is a modular instrument with a science channel including both an imager and an integral field spectrograph (IFS) and provides simultaneous wavelength coverage over the 0.84 µm – 2.4 µm range. IRIS offers diffraction limited performance for wavelengths longer than 1 µm. To achieve diffraction limited performance, IRIS works in tandem with the facility adaptive optics (AO) instrument – NFIRAOS (Narrow Field InfraRed Adaptive Optics System). The IRIS imager provides a “wide field” greater than 30 x 30 arcseconds with pixel sampling of 4 mas. The imager relays the on-axis portion of its field to the IFS, which affords users’ two “slicing” techniques and four selectable spaxel scales ranging from 4 mas/spaxel to 50 mas/spaxel with a minimum 3,960 spaxels available to users when operating in an un-masked configuration. Given the sequential layout, the imager and IFS share a common suite of filters enabling science at a variety of narrow and broad bandpasses. Complementary to this, the IFS contains a range of gratings to offer spectral resolutions of at least 4,000 for all broad (20%) bandpasses as well as spectral resolutions of 8,000 made achievable through a combination of its filters, gratings and field masks. The Imager also contains an atmospheric dispersion corrector (ADC) and cold Lyot stop. Both the imager and IFS are built around 4Kx4K HgCdTe detectors from Teledyne. The imager and IFS are housed within the science cryostat, which provides the required vacuum cryogenic environment. The science cryostat mates to IRIS’s upper enclosure, which maintains the environmental interface to NFIRAOS and further hosts IRIS’s three on-instrument wavefront sensors (OIWFS) for natural guide star (NGS) Tip/Tilt/Focus (TTF) measurements. Both the OIWFS enclosure and science cryostat are supported by the IRIS support structure, which also provides the mechanical interface to NFIRAOS. NFIRAOS itself can host up to three instruments, each “ported” to either its top, side or bottom. IRIS benefits from occupying the bottom port and thus hangs beneath NFIRAOS providing IRIS with a gravity invariant environment. NFIRAOS does not include a K-mirror, as such, IRIS also includes an instrument rotator to provide field de-rotation. The rotator is embedded within the IRIS support structure and provides the mechanical interface between the OIWFS/science cryostat and the support structure. Observatory services as well as IRIS data and mechanism control cables route primarily along the exterior of the science cryostat to IRIS’s cable wrap, which is located on the Nasmyth platform. The cable wrap serves as the relay between the instrument and IRIS electronics rack. The electronics rack houses IRIS computers and controls, etc. IRIS calibrations including wavelength and flat-fielding are provided by a separate system, the NFIRAOS Science Calibration Unit (NSCU), which mounts at the front of NFIRAOS and provides. 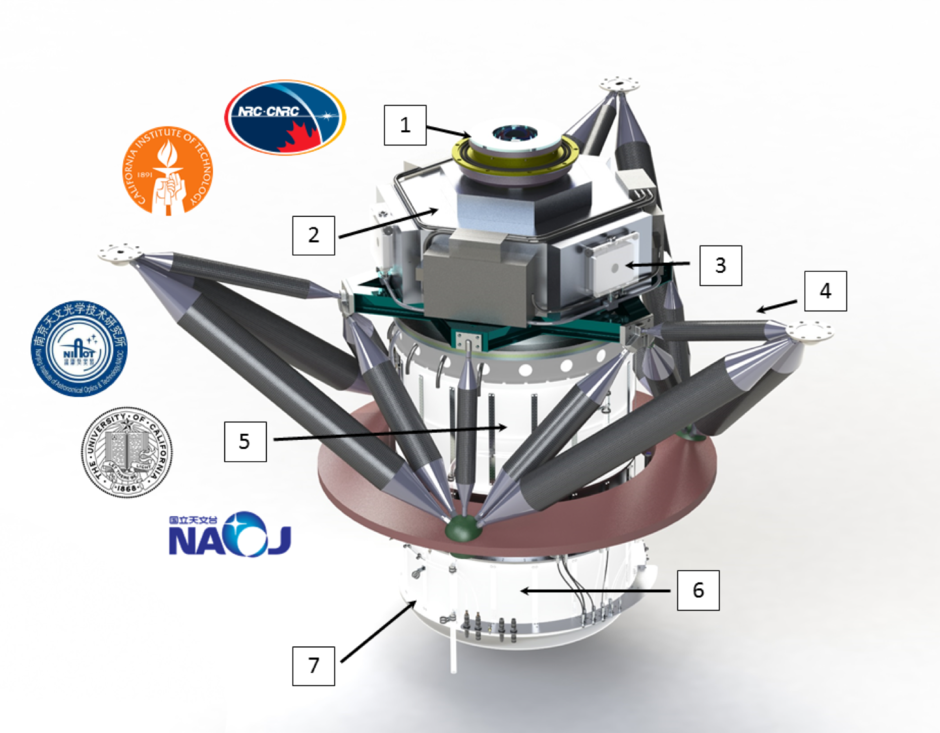 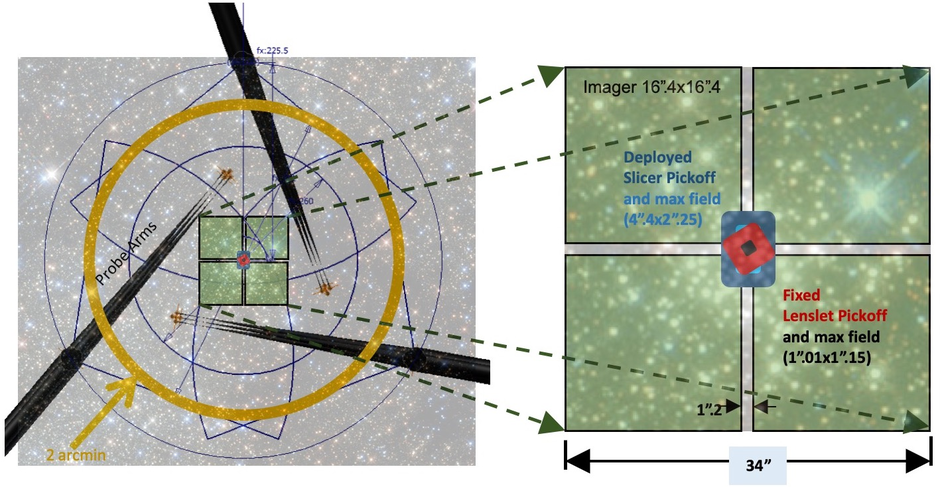 Geometric configuration for the three wavefront sensor arms that can be positioned over the 2' field of view. The on-axis imager (green) and the options for the IFS field of view are shown.

IRIS will house low-order wavefront sensors (WFS) that will be used by NFIRAOS to monitor tip-tilt, astigmatism, and focus. IRIS will have three WFSs, which will sample stars as faint as J = 22 mag over a 2 arcminute field-of-view (FOV). The WFSs must be deployable over the entire FOV to maximize sky coverage, and allow for optimum AO correction (the best correction is obtained when the WFSs are deployed symmetrically about the science target). The figure below shows the geometric configuration of the three tip-tilt guide arms and the locations of the IRIS imager and spectrograph.

IRIS’s Integral Field Spectrograph provides users with two means of spatially sampling the field. The Lenslet channel of the spectrograph provides the finer sampling scales (4 & 9 mas) and probes the diffraction limit of the telescope. The Lenslet channel features an oversized array and meets full requirements over a sampling size of 100x100. The array can also be masked to reduce the field-of-view while enabling a mix of higher spectral resolutions and bandpasses. The coarser sampling scales (25 & 50 mas) are provided by the Slicer channel. The slicer channel is built around an image slicer that chops the field into 88 separate samples. Both channels share a common set of gratings, camera and detector.

Shown in its test cryostat Caltech has designed the mechanism for the IFS slicer periscope mirror. The mechanism was moved 45,000 times to demonstrate it meets its lifetime requirements while preserving its repeatability and accuracy. The periscope mirror assembly is the largest of four analogous mechanisms found in the IFS. Successful testing completed November 2019. The IRIS final design approach involves a standard mechanical design iteration where the preliminary designs are expanded based upon evolving definition of the performance budgets. The designs are then analyzed for thermal and structural considerations via extensive finite element analysis. Mechanisms, bonding and alignment of optical components were then prototyped to confirm real performance and verify the analysis. If required minor design changes are then incorporated and the final detailing of the assemblies is completed. (top) Detailed CAD models for the IRIS Slicer channel TMA collimator highlighting the optics, mounting features, bench plate and thermal strapping. (bottom left) Detailed CAD model of the Slicer channel deployable periscope mirror. (Bottom right) CAD model zoom on the adjustment features for one of the Slicer channel optical mounts.

The Lenslet mask slide serves to mask the IFS Lenslet array and features settings enabling exposures of the full array, a field reduced array and calibration settings. UCLA has designed and is prototyping the Lenslet mask to complete ensure actual performance matches analysis results. The mask derives some heritage from a similar Lenslet mask used with Keck’s OSIRIS instrument. 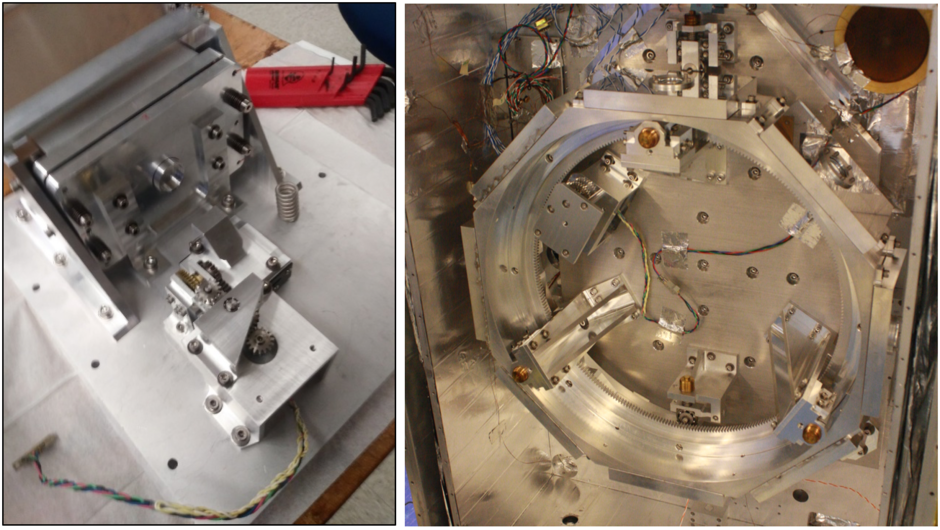 UCLA is providing the grating turret for the IFS. The turret houses up to 14 gratings and will enable spectral resolving powers in the 4,000 – 10,000 range for both channels of the IFS. To ensure the demanding stability and repeatability requirements are met UCLA has undertaken extensive prototyping of the assembly. (right image) The turret structure will house the 14 gratings and provides 360° rotation to grating selection. (left image) Each grating is mounted on its own housing. Upon selection the individual gratings will be pushed forward into an observing configuration. The near-infared (0.84 - 2.4 μm) imager will have a spatial sampling of 0.004" per pixel with a total field of view of 34" x 34". The optical design has been optimized to achieve the lowest wavefront error (~40 nm) in order to sample the high spatial resolutions achieved from the adaptive optics system, NFIRAOS. The leading science cases for the imager require a high level of astrometric precision (e.g., Galactic Center, star forming regions, and the Solar Systems). The imager is expected to achieve an astrometric accuracy of 2 mas for absolute astrometry and 50 μas for differential astrometry in a 100 s exposure, with a systematic floor of 10 µas. 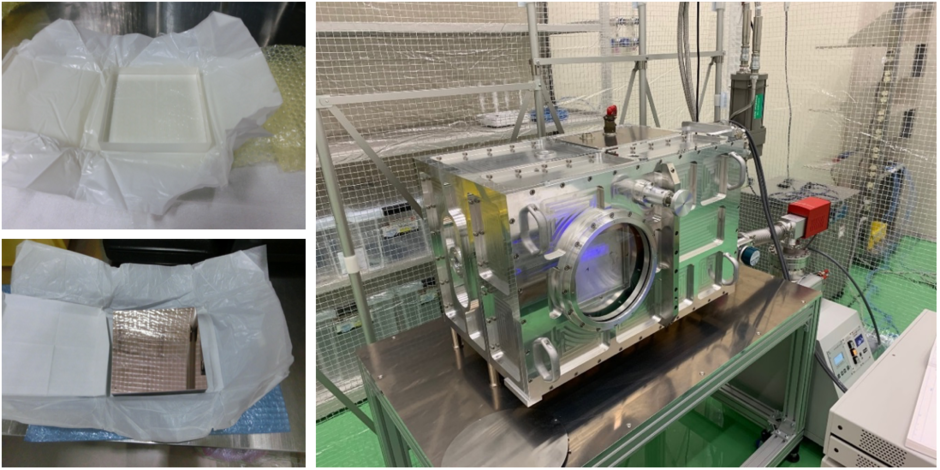 Assembly and alignment of IRIS’s science channel opto-mechanical assemblies occurs at room temperature; however, the operating temperature is several hundred Kelvin lower. This will cause a variable contraction for the different materials and could introduce stress deformation into the optical surfaces. This deformation would manifest as an additional error term and degrade IRIS’s imaging quality. NAOJ has completed testing to measure the thermal deformation effects using sample coated substrates. The effects were measured by cooling a multilayered, coated substrate and measuring the surface figure errors. Shown in the left images the mirror sizes are 160x160mm. The prototyping efforts enable NAOJ to compare their previous analysis against the actual observed results and adjust their final design accordingly.

The first step in retiring risk was for NAOJ to verify their analysis and confirm the extent of deformation imparted to the optic from the bond pad and adhesive. The effects of optic deformation were first gauged by cooling a smaller sample optic and bond pad and measuring the surface figure. Shown below the optic sizes were 25mm in diameter. During this exploration a number of bond pad materials were explored. As shown in the right image the testing also included extensive destructive testing to also validate the strength of our bonded optics to ensure the IRIS will survive both its shipping and seismic requirements. The imager cold-stop final mechanical design and detailing is complete (upper image). The cold-stop needs to track the formed pupil with a high degree of accuracy to ensure suppression of the background. Similar to all of IRIS’s cryo-mechanism to minimize instrument downtime the cold-stop also has demanding lifetime requirements. The mechanism was driven full rotation 12,000 times and then assessed for wear. The results of the prototyping were then incorporated into the final detailing of the design. The lower two images illustrate some of the components manufactured for the prototyping effort including the flywheel and spring supported worm gear. The lower right image shows the isolated worm gear coated in dicronite. One of the challenges of generating an instrument with high angular resolutions (0.004") is compensating for the dispersion that occurs within Earth's atmosphere. In order to counter this effect IRIS will house an atmospheric dispersion corrector (ADC) in front of IRIS science's dewar. It will use real-time knowledge of atmospheric conditions (temperature, pressure, humidity) and optical elements to correct for dispersion over varying observing elevations. The IRIS science channel instruments, the imager and IFS, are housed in a cryogenic vacuum container – the IRIS Science Cryostat (Caltech). After the air is evacuated the science cryostat is cooled to the boiling point of liquid nitrogen (~ -200°C at the altitude of the summit). The science cryostat is reconfigurable so that its upper and lower halves can be separated such that both can be evacuated and cooled separately. This functionality enables separate integration and testing of both the imager and IFS.

Caltech is currently testing a half-scale prototype of the science cryostat cold plate. The cold plate provides the reservoir for the liquid supplied by the Observatory and provides the primary thermal interface to ensure heat is removed from the system. The prototyping activities have been undertaken to validate earlier thermal models showing the heat flow and stability of the instrument.

The IRIS science team has generated a plethora of astronomical topics that IRIS will be capable of exploring. The combination of a large collecting area and unprecedented angular resolution will have a direct impact on a broad range of science programs that span topics as diverse as the search for extrasolar planets to studies of the first stars to illuminate the Universe. Most intriguing, are the new discoveries that will likely be revealed by IRIS. As is stated in The Exploration of the Unknown by Kellermann el al. 2009, "The excitement of the next generation of astronomical facilities is not in the old questions which will be answered, but in the new questions that they will raise." With IRIS and TMT extending our current technology by orders of magnitude in sensitivity and angular resolution it has the promise of doing just that.

Key to many of the IRIS science cases and a requirement for extremely precise astrometric, photometric and spectrophotometric measurements is detailed knowledge of the AO corrected Point Spread Function (PSF) on the science detector. A significant effort is underway to develop full PSF Reconstruction tools for TMT so that PSF information needed for the most demanding forms of data analysis is automatically generated and provided to the science teams along with their science data.

Extrasolar Planets: The detection and characterization of extrasolar planets and planet forming environments. On the left, an image of the first extrasolar multiple planet system ever directly-imaged, around the young star HR 8799 (Marois et al. 2008). The image is a near-infrared color composite of J, H, and K bands taken from both Keck and Gemini telescopes using adaptive optics. Each planet is respectively 70, 40, and 25 AU from the central star. A system such as HR 8799 would be easily studied using IRIS.