Integration and Testing at the TMT Laboratory

One of the highlights for me starting to working on TMT four years ago was my first visit to our laboratory, and the opportunity to see and touch the hardware prototypes for TMT’s mirror support and control systems. Our lab is close to the TMT Project Office in Pasadena, so we can quickly and easily access integration and test facilities as we research and develop technologies for TMT. Our partner institutes across the world also have their own lab facilities for integration and testing of the subsystems that they will deliver for the telescope, but the TMT Project Office holds many responsibilities for the design of complex systems that will be manufactured elsewhere.

Integration is the process of carefully putting together individual components, in a pre-defined sequence, to come up with an assembled subsystem. Our laboratory provides us with a dedicated space to perform this important task, as well as subsequent testing. One of the main subsystems we’ve been integrating—and testing—in our laboratory is the prototype of the segment support assembly. Recall that TMT’s primary mirror will actually be a 492-piece honeycomb of smaller, hexagonal mirrors. Each of those hexagons is called a mirror segment. Every mirror segment will have to move in concert with all the other mirror segments to reshape TMT’s mirror as it focuses on distant objects. To accomplish this, each mirror segment will have to rest in its own segment support assembly, which will hold and, as needed, align the mirror segment. Think of cradling a small mirror in the palm of your hand, with your hand providing not just the support for the mirror but the positioning as well.

Every segment support assembly has to have a means of controlled movement—much more precise than anything we could achieve using the palms of our hands. Whilst the TMT Project Office is responsible for designing the segment support assemblies, they are being manufactured by our Indian partner, which is contracting with the aerospace sector of India’s manufacturing base to machine the parts and put them all together. In our laboratory, we’ve trained workers from Indian industry in the procedures for putting together the prototypes of the segment support components they have machined. 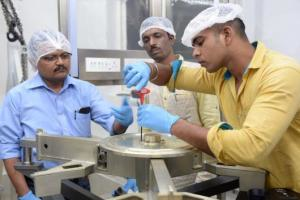 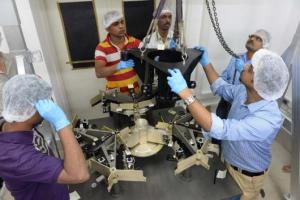 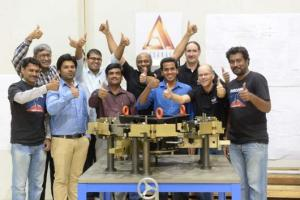 To build confidence in our design for TMT, we need to evaluate and test not only prototypes, but also technologies that have been used on previous telescopes. The sheer size of TMT and its anticipated 50-year-long operational lifetime demand that every subsystem and every part be reliable, durable, and capable of being safely maintained.

Testing is actually only part of what we call “verification,” a sequence of activities in which we look again at every technical requirement of every subsystem, and formally assess the extent to which the subsystem actually satisfies those requirements. TMT’s technical requirements always provide specific criteria against which compliance can be evaluated and quantified. Given the complexity of TMT, our system engineering team approaches verification incrementally, step-by-step, starting as early as possible in the process of developing a subsystem and progressing through additional layers of complication as the project evolves, in order to simplify, as much as possible, the final verification that will have to be done on the mountain top where the telescope will finally be situated.

Part of what we do in the lab is verification testing. Different kinds of testing are needed, such as functional testing, which aims to ensure the subsystems actually work the way they’re supposed to. Beyond basic functionality, we also need to consider whether the subsystems will be able to survive the environmental conditions to which they will be exposed—both during transportation and construction, and once in use over the half-century TMT is expected to last. Oddly enough, conditions whilst transporting a subsystem might be harsher than those encountered after the component is actually mounted on the telescope.

Parts of the segment support assembly have been undergoing environmental testing so that we can understand how they function when exposed to variations in temperature and humidity. 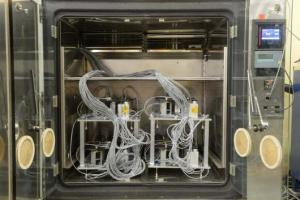 This kind of testing has been very valuable. By pushing the temperature and humidity levels of the test environment, we can see where certain components have failed. Failures help our engineers understand which parts of the current design are fragile and need to be made more reliable.

Here’s a video of a completed prototype segment support assembly undergoing verification testing in the laboratory, with Azusa, one of our communications staff, providing commentary—here’s a chance to practice your Japanese.

Now that we’ve already tested some parts of the segment support assemblies, the next step will be to install a multi-segment test bed, which we will use to check our design of the primary mirror system—also known as M1—before committing to full-scale production. Designing and building something as complex as M1, with an enormous number of parts, naturally comes with risks. Small errors in the design of any one part can magnify themselves into significant schedule delays, as well as cost increases, so we want to identify any errors in the design as early as possible. Testing the multi-segment bed will help us reduce those risks. The test bed will also be used to develop and validate procedures that will be repeated during integration at the summit whilst installing and integrating the primary mirror system. 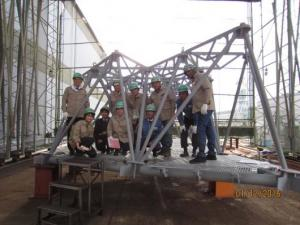 The test bed structure is a prototype that was welded together by Hitachi Zosen, which is under contract for the fabrication of Mitsubishi’s design of the telescope structure. The structure has just arrived in California from Japan, and is being prepared for installation in the laboratory. You can read more about this in the complementary news story on these TMT web pages.

Another subsystem scheduled for upcoming evaluation at the lab is the carbon dioxide system that will be used to clean the primary mirror in situ. We need to make sure we don’t scratch or damage the mirror during cleaning. As is done on many other telescopes, TMT’s cleaning system will expand liquid carbon dioxide through a nozzle. When that happens, the liquid undergoes a physical phase change, and becomes a mixture of carbon dioxide gas and dry ice flakes. These flakes knock the dust particles off the mirror surface, without scratching the coating because they slide over the surface on the cushion of carbon dioxide gas. 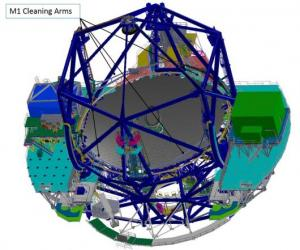 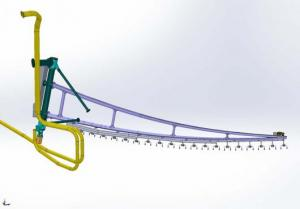 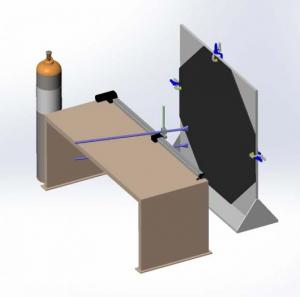 We’ll perform initial testing of the prototype cleaning arm starting next week to look at different pressures, flow rates, and other factors.

To accomplish these next phases of testing, we’re moving our lab into a larger space in Monrovia, California. Over the past few months, we’ve been planning what will go into that space. We started with a 3D computer generated model of the lab space, and mapped out the key subsystems that will be integrated. 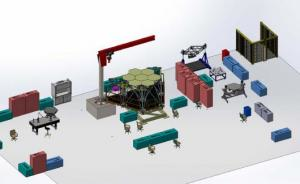 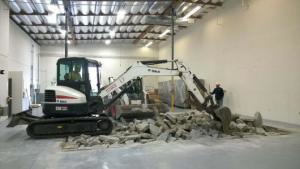 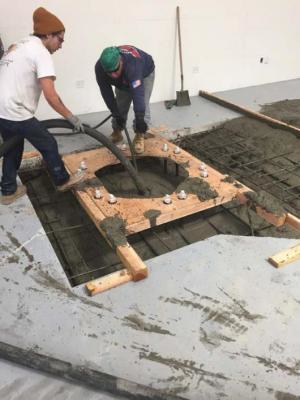 To install and test the multi-segment test bed and other components, we’ll need a crane, and it will require the support of a strong, rigid concrete pad that we need to pour.

As work progresses on this pioneering project, as always, the most important thing is to make sure the manufacturing, integration and testing facilities are safe to work in, and that the equipment and subsystems can be handled safely. TMT has a dedicated safety team, with a mandate to implement the top level Environment, Safety and Health Plan, which lays out the obligations for all of our teams across the world. Protecting the equipment from damage is also very important, considering some items run to millions of dollars each, and every member of the TMT team is conscious of the need to use resources wisely.

Making the most of available resources is indeed one of the best reasons for making sure that everything works as it is supposed to work before putting it all together on the top of a mountain. Ideally, the time to learn about and address any weaknesses is before the telescope goes into operation, which is why TMT’s laboratory plays such a vital role in accomplishing TMT’s overall mission, helping us gain confidence in the design of the systems that will ultimately be deployed at the observatory site. We’re installing machines, equipment and prototypes right now in our laboratory, reflecting yet again how much exciting work is going on with TMT across the world.