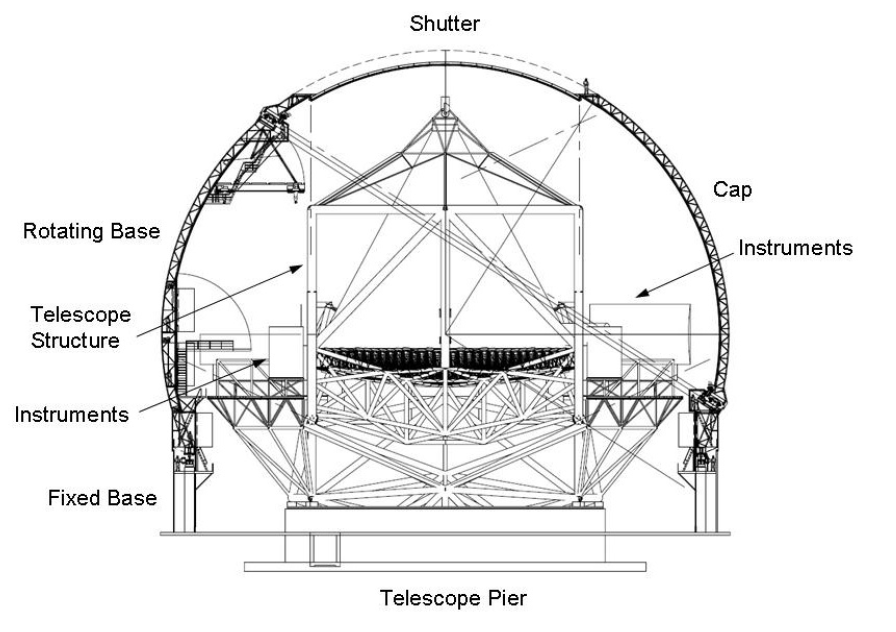 The TMT Enclosure as seen in a cross sectional view, illustrating how the telescope itself rests safely within the enclosure.

As I write this, the final design for TMT’s enclosure—a huge, moveable dome that will house the telescope—is nearing completion. A substantial portion of the final design has already been done, allowing for work to begin on the production readiness phase. The last of the design reviews, for the enclosure’s electrical and controls aspects, is planned for the coming months, with the hope that a contract for the fabrication phase and making all the parts can be signed in 2018.

Rending of TMT with an aluminzed dome.

As you can see from the video, TMT is like a great eye—one that will let us see into the far distance and the far reaches of time, where we will make discoveries and maybe even finally find signs of life beyond our own. You can think of TMT’s primary mirror as the lens and retina of the eye: the parts that let us focus on and resolve images. But as with our own eyes, the lens and retina are fragile, and must be protected by other structures. For us, it’s the outer surface of the eye and the eyelids. For TMT, it’s the enclosure, which serves as a shutter and safeguards sensitive optical and electronic components from the elements.

You might wonder why TMT even needs an enclosure—after all, some types of telescopes are completely open to the sky. The answer has to do with wavelength. TMT captures visible and near-infrared light, with wavelengths on the shorter end of the electromagnetic spectrum that are tiny compared to waves on the longer end of the spectrum, such as radio waves. Optical astronomy is therefore more susceptible than radio astronomy to small disturbances, such as light scattering off dust particles, or turbulence from convective perturbations in the air. So an optical/near-infrared telescope, such as TMT, needs an enclosure, while radio telescopes don’t.

Smooth and Strong – A Complex System

It may be surprising to learn how complex the enclosure is, and how many factors we have to consider in creating it. The enclosure dome will be 56 meters high and 66 meters across. The dome’s design is called a calotte (cap), and, as shown in the video, that description fits well. The enclosure consists of four basic components: a fixed base, and above that, a rotating base, rotating shutter, and rotating calotte. Here’s a diagram showing these subsystems:

As you might imagine, the fixed base has to be strong enough to support the rest of the enclosure. And as the diagram shows, the fixed base and rotating base fit together along a horizontal plane, which is partway above the observatory floor. Still further up, the connection between the moving base and the calotte structure is tilted, and within the calotte is the aperture opening. Here’s cross-section showing how the telescope itself rests safely within the enclosure:

Once the telescope is assembled and operational, it will work in concert with the moving enclosure. To make observations, we first move the shutter to open up the aperture, then we move the calotte and rotating base relative to each other and to the fixed base, thereby shifting the aperture up, down and sideways as needed, as depicted in the video clip at the beginning of this article.

In the video, the enclosure’s movement is smooth and seems easy, but of course achieving that movement is a complicated, multifaceted undertaking, and as with all complex scientific and technical endeavors, we need to be clear on what every subsystem must be able to do in order to achieve the necessary overall scientific performance. In system engineering parlance, we say each subsystem has to meet its technical requirements.

TMT’s enclosure is no exception. The requirements are compiled in a Design Requirements Document, and each requirement is uniquely numbered. For example, Requirement [REQ-2-ENC-0870] addresses the enclosure’s tracking motion, and specifies: “The enclosure system shall be capable of tracking the position of the aperture opening to the virtual motion of a target on the sky over the required range of motion within a peak error of 10 arcmin in each axis on the sky.” 10 arcmin (arcminutes) is roughly a third the diameter of a full Moon, as seen with the unaided eye from Earth. This enclosure tracking is less precise than that required by the telescope itself, but is still a significant challenge, considering the size and weight of the enclosure, and the additional requirements of moving smoothly at very slow speed. We need the motion to be smooth because we don’t want to transmit vibrations to the telescope and cause image jitter.

After an “infrequent earthquake”—one expected to occur only once every 200 years—the enclosure needs to be able to resume operations within two weeks using spares that are on-site, normal operations support staff, and normally available equipment, though this work may include replacing one-time consumable items.

Finally, we need to anticipate a “very infrequent earthquake,” the kind expected to occur only once every 1,000 years. The design requirements state that no permanent deformation resulting from this magnitude of earthquake shall prevent closing and sealing of the enclosure. Both the structural and mechanical systems must be robustly designed to enable shutter closure after a major earthquake event. This functionality allows the enclosure to fulfill a critical design requirement: to protect the telescope from damage.

As important as the enclosure’s movement and sturdiness are, those things are still not enough. A number of other considerations influence the enclosure’s design. One of the most important is temperature. Much like us, TMT is highly sensitive to temperature, both inside and outside. When we have a fever, or if it’s too hot or cold for our comfort, we don’t feel or function our best. TMT’s sensitivity to temperature, too, affects how well it functions.

Inside TMT’s enclosure, temperature differences in the air can cause turbulence. Curlicues, or “parcels,” of warmer air rise, cool off, fall, heat up, and then rise again, over and over again, in convective motion, just like what happens in an oven, or in the sky. These parcels of air at different temperatures all moving at once create the turbulence, which in turn can degrade what we call “optical seeing quality.”

Think of the undulating heat lines you see in the distance on a summer day. To correct for this, we want to flush the air out of the enclosure, so that any hotter or cooler parcels of air are evacuated before they cross the telescope’s optical path. To stabilize internal air temperature, the enclosure uses three rows of vents, the size of which can be changed to minimize buffeting of the mirrors when outside wind speeds are high.

Outside, we want to reduce the temperature swings that the telescope must endure over each 24-hour cycle. Temperature changes make the telescope and all of its parts expand or contract, and these changing dimensions make it hard for us to achieve the required level of pointing accuracy. To minimize heat entering the enclosure during the day and improve cooling at night, we coat the outside of the enclosure with a special paint that has the twin features of resisting sunlight absorption during the day and efficiently emitting heat back into the cold sky at night. This way we can reduce the size of the temperature swings, and reach a steady-state temperature more quickly and get to work making astronomical observations. In addition to handling temperature variations, the enclosure must be able to resist extreme environmental conditions of over 130 millimeters of ice thickness, and over 1.8 meters of snow depth.

Putting It All Together

TMT’s enclosure is being designed and fabricated with funding from the Canadian Government, administered through National Research Council Canada. The National Research Council Canada has in turn engaged the assistance of Canadian Commercial Corporation, a Federal Crown Corporation, to manage the enclosure contract. As with all of our government partners, Canada prefers that, where appropriate, work be performed by private industry to promote innovation and competitiveness. In the case of TMT’s enclosure, Empire Ironworks Ltd., through its Dynamic Structures division, based in British Columbia, is the company currently contracted by the Canadian Commercial Corporation to complete the final design and production readiness work.

Work on the telescope enclosure, like other work across TMT’s partnership, is progressing apace and benefiting from the expertise of some of the most talented engineers and scientists on the planet, inspired by the vision of what TMT will see. Each day the moment is nearer when TMT will turn its gaze to the heavens and begin to discover things we can hardly even imagine today.

Integration and Testing at the TMT Laboratory