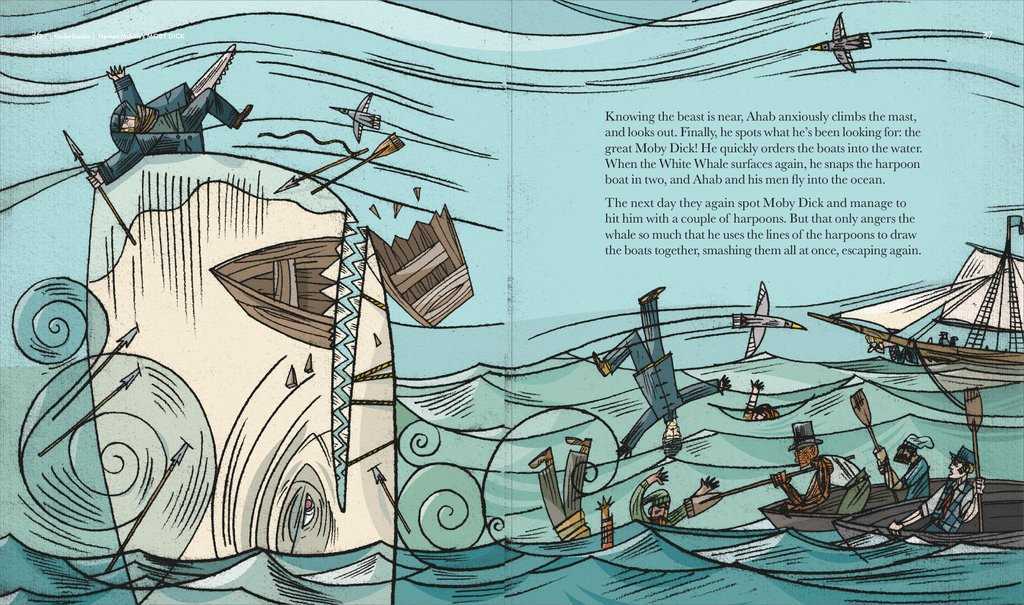 Searching for Leviathan, Part 2: Where To Look, and How Old Is It?

In the previous article of this series on leviathans, we looked at how we think black holes have formed. Now, let's look first at how we can find these black holes, and second at how old we think they are.

How Can We Find Back Holes?

Had you followed Captain Ahab down into his cabin [...], you would have seen him go to a locker in the transom, and bringing out a large wrinkled roll of yellowish sea charts, spread them before him on his screwed-down table. Then seating himself before it, you would have seen him intently study the various lines and shadings which there met his eye [...]

If you were Captain Ahab looking for Moby Dick, you’d probably find it hard to see the deep-swimming white whale directly too. Instead you’d have to look for other signs the whale was nearby. Perhaps eddies on the surface of the water, strange behavior in schools of fish, or even the floating wreckage of other vessels that dared venture too close. Likewise with black holes—as with many things in astronomy, cosmology, and science in general: even though we can't see them directly, we can look for how they affect other things around them, things we can directly see or measure.

Gravity increases with mass—a phenomenon we’ll explore in a little more detail below. A "heavy" object (or, more accurately, a massive object) is bound to show itself through the way its gravitational force affects objects around it. Think of the Moon revolving around the more massive Earth, or a star, like the Sun, whose gravity keeps smaller objects such as planets revolving around it. The enormous mass of a black hole, expressed as extreme gravity, is also bound to reveal itself to those looking carefully for it—through the way it changes the behavior of nearby objects. So to find a black hole, we can look at the behavior of stars in the area where we suspect the black hole might be.

As we’ll discuss in greater detail soon, astronomers now believe every large galaxy very likely has a supermassive black hole at its center, so a galactic center is a logical place to look for those gravitational effects. Stars in a galaxy all travel in orbits, with those orbital shapes depending on how much mass, spacing and therefore gravitational attraction there is among all the ingredients in the galaxy, and also how much momentum remains from the original swirling formation of the galaxy. But we are specifically interested in those stars that are in the innermost part of the galaxy, closest to where we think the black hole resides, and therefore most susceptible to the black hole’s gravitational effects.

To assess those gravitational effects, we need to measure the stars’ orbits as precisely as possible. Doing this takes time and patience. As you know from watching stars yourself, we can't just glance up and see stars moving around each other. Aside from their nightly sweep across our sky from east to west—rise to set—stars appear from our perspective to be fixed in place. But if we examine the right stars in the right way over a long enough time frame, we can measure how they move relative to other stars and objects in their proximity. One way to do this is to capture two images of a particular area of sky—let's say, the center of our Milky Way galaxy—several months apart, and then compare them. This lets us see which stars have changed position significantly. We calculate and plot out the orbits and speeds of those stars, and if we suspect a black hole, we can triangulate on the spot where we believe it's located.

As I explained in earlier articles in this blog, when we see a constellation, the motion of its stars appears "flattened" on the sky: back and forth, up and down—but not towards and away. In reality, of course, the stars are moving in three dimensions through space, not just two, and the challenge becomes to find a way to add back the third dimension, so we can define and understand the star’s true movement. With careful measurement and mathematical ingenuity, we can do this.

Any particular star probably won't be moving only directly-toward or directly-away from us (if it were, then from our perspective, it wouldn’t appear to move at all, just grow immeasurably brighter or fainter). Instead, the star will also be moving crosswise, and up or down. We can describe this kind of movement mathematically as a vector. By splitting the star’s motion vector into three mutually perpendicular components, we can define the true direction of that motion. The first component is directly toward us, and the second and third components are each in a direction that is perpendicular to the first one and to each other. 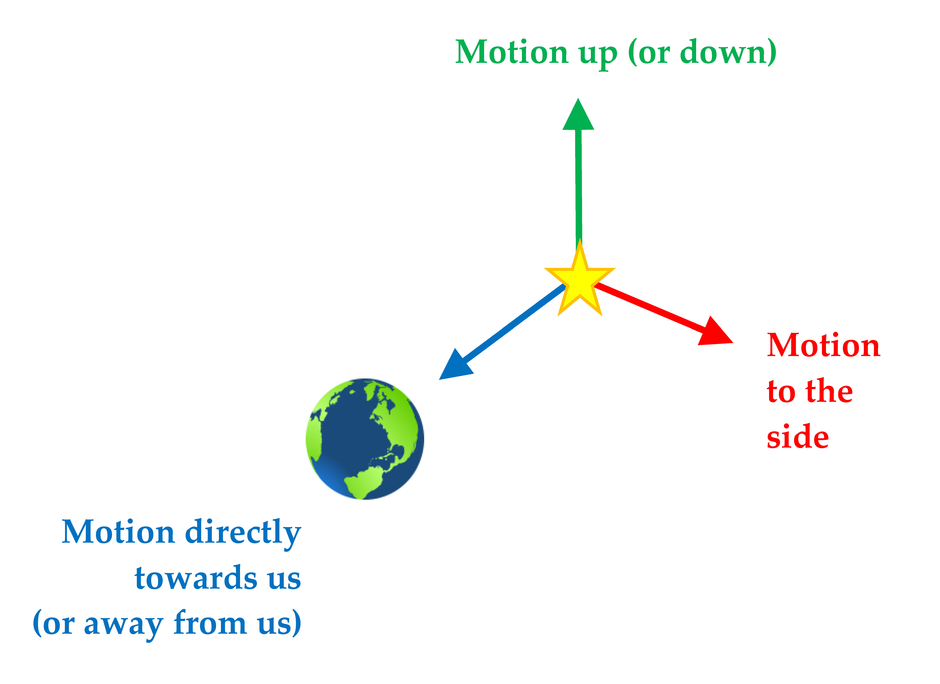 How do we measure how much the star is moving directly away from or towards us? When something is traveling away from you, its light waves get stretched out, shifting the colors you see toward the red part of the spectrum; likewise, when something is moving toward you, the light waves are compressed toward the blue end of the spectrum. This phenomenon is called the Doppler effect. So we have to compare the light signature we get from the star to the corresponding light signature at home, to calculate how much the colors have been shifted. The amount of this shift is proportional to the star's speed away from or towards the Earth, and this gives us the third component of the velocity that we have been missing so far.

Tracking individual stars was the method used by Professor Andrea Ghez’s Galactic Center Group at the University of California, Los Angeles, to find evidence for the supermassive black hole we now believe inhabits the center of our own Milky Way galaxy. The Galactic Centre Group is one of our partner teams on TMT, and you can read more about their work here. Professor Ghez's Group found the orbits of the stars at the center of the Milky Way could be explained by the presence of a very massive object there—one we couldn't directly see. Here’s their animation depicting the orbital motion of such stars, based on their observations with the W.M. Keck Observatory: 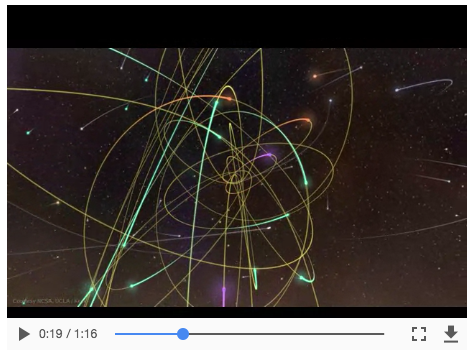 From this work and the research of others, including at the Max Planck Institute in Germany, scientists have been able to deduce the presence of the supermassive black hole at the center of our own galaxy.

So far, our ability to track the movements of individual stars is limited to stars in our own galaxy. Other galaxies, even our neighbor Andromeda, are too far away for us to measure the movements of their individual stars—for now. But this is something that the next generation of observatories such as TMT will allow astronomers to do for the first time.

Even with current technology, however, other types of observations (different from looking at the motions of individual stars) have led us to believe that most of the large galaxies in the near vicinity of the Milky Way have supermassive black holes in the center. Because we generally assume the structure of large galaxies is consistent throughout the Universe, we suspect most, if not all, large galaxies have a supermassive black hole at their center. In some of those galaxies, we expect to detect activity from the vicinity of the suspected supermassive black hole. When a star’s orbit carries it too near the black hole and the star gets ripped apart on closest approach, some of the debris gets pulled in toward the black hole, spiking the infall of superheated matter around it and powering a flare we can potentially see from Earth—if we can build a large enough telescope.

How Old Are Black Holes?

[...] some whalemen should go still further in their superstitions; declaring Moby Dick not only ubiquitous, but immortal

Once we've actually located a black hole, it would be nice to be able to tell how old it is. But getting a black hole to reveal its age isn’t easy. Black holes are inscrutable by nature. Not only are they invisible in terms of putting out no light, but they emit almost no information of any kind at all directly. When it comes to black holes, the flow of information is for the most part one-way: in but not out.

Here again, however, by extrapolating from things we can get information about, we can try to estimate a black hole’s vintage. One approach to doing this begins with assuming the black hole will be roughly the same age as its host galaxy, then estimating the age of the galaxy. This age-of-the-galaxy approach isn’t necessarily foolproof, because our underlying assumption might be wrong: a black hole might have developed differently over time from its host galaxy. Indeed, the so-called co-evolution of black holes and their host galaxies is an active area of astronomical research.

Using this approach, we estimate the oldest supermassive black holes we’ve found are on the order of 13 billion years old—almost as old as the Universe itself. And indeed there are other lines of evidence that black holes existed at very early times, from some of our deepest images into the Universe. A fundamental tenet of astronomy is that looking to further distances is equivalent to looking backwards in time, since the light from distant sources has taken a longer journey through space before reaching us. In observations designed to look for exceedingly distant objects, astronomers have found signatures of heated gas collapsing toward black holes in galaxies far, far away. While these so-called quasars are signposts to a young Universe containing hungry black holes, it’s still a mystery how and why such large black holes formed at such an early time in the evolution of the Universe.

In the next article in this series, we'll look at how we figure out how big (massive) leviathans are.

Many thanks to my colleagues Matthias Schöck (TMT System Scientist), Warren Skidmore (TMT Instrument System Scientist), and Nicholas McConnell (STEM Workforce Development and Program Manager at The Institute for Scientist & Engineer Educators), for helping with this blog entry.