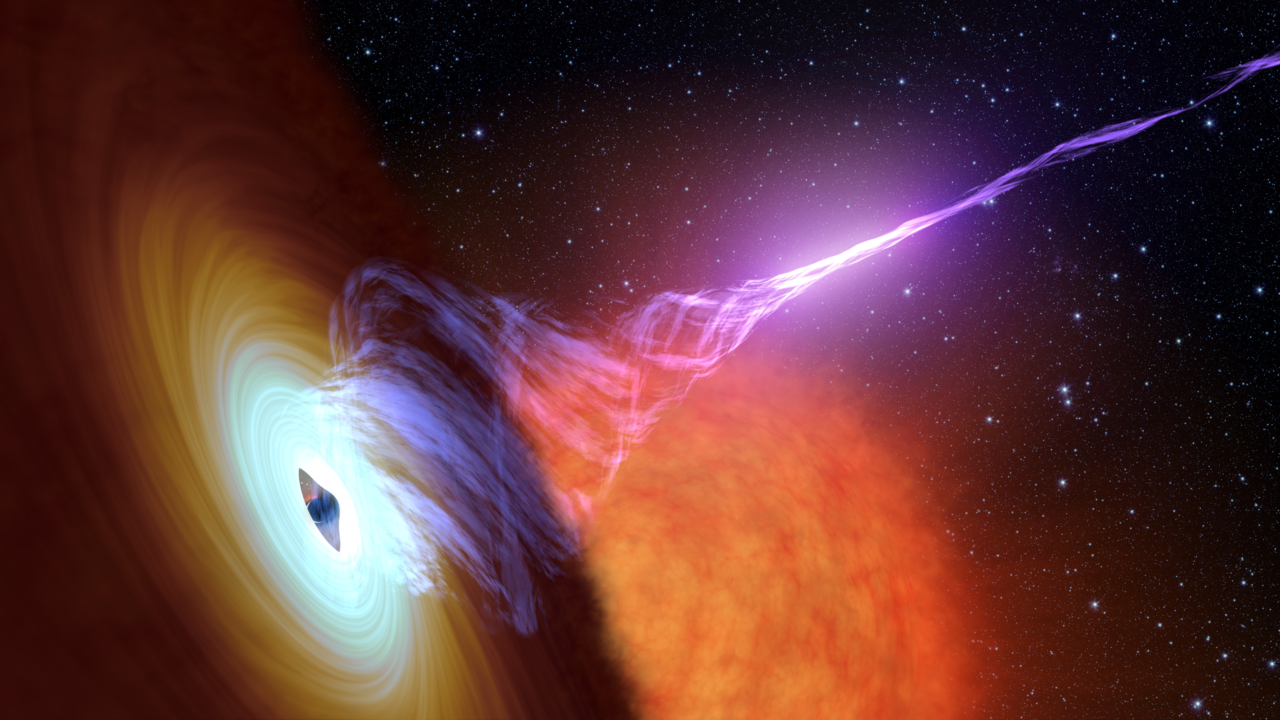 In this series of articles, we've discussed what we know about black holes—how we can find them, how old they are, what their masses are. Now, we'll describe jets that we see coming from the center of some galaxies, where we think black holes are the source.

Finally, we'll recap how technology has helped us so far in our search for leviathans, we we'll look ahead to describing how TMT will help us fill in some of the gaps in our knowledge of black holes.

Why Do They Spout?

[...] the whale was now seen some mile or so ahead, at every roll of the sea revealing his high sparkling hump, and regularly jetting his silent spout into the air. [...] his spout is a big one, like a whole shock of wheat, and white as a pile of our Nantucket wool after the great annual sheep-shearing.

Whales spout to expel air. Water vapor in the expelled air meets the colder surroundings, and condenses into the plume we can see. Believe it or not, a black hole and its host galaxy sometimes have their own version of a spout.

You can imagine the gravitational vortex of a black hole as a kind of giant vacuum, or drain, that attracts nearby dust and gas, creating a disk of material that revolves round and round the black hole like a funnel going down the drain. As the dust and gas swirl down into the black hole, their gravitational potential energy changes into kinetic (moving) energy. When things move, they generate friction, and friction causes heating, as you already know. It’s why you might rub your hands together to warm them on a cold winter morning.

Heating material up strips away charged particles (ions) from the atoms and molecules that make up the material. So as the gas and dust spin downward toward the black hole and get heated up, their ions get separated from them. Those ions are also part of the stream of material and along with it, they too move. As they do, their movement creates magnetic fields. In some instances, these magnetic fields are so intense they generate very fast outward-streaming jets made of ionized gas, scooped up from close to the black hole. This is the supermassive black hole’s version of a spout, which we call the jet of an active galactic nucleus.

Just as the sailors looking for Moby Dick could see the spout from much farther away than they could see the whale himself, these “spouting” black holes make it possible for us to detect them even in very distant galaxies. The active galactic nucleus puts out so much energy that it actually outshines the billions of stars in the rest of that galaxy. So we can target these bright spots in the night sky, and use them to track where supermassive black holes might be, even very, very far away. The fraction of galaxies that have jets is small, so this approach can’t show us the locations of most supermassive black holes. Even so, it’s an important complement to other ways of finding these cosmic leviathans.

Even beyond locating supermassive black holes, trying to figure out their origins, and estimating their sizes and ages, we want to learn more about their habitats. For example, what chemical ingredients and physical processes feed active galactic nuclei and their resident supermassive black holes? And how do they interact and develop together over time?

So active galactic nuclei (whether associated with a “spouting” black hole or active for other reasons, which are beyond the scope of this article) are a fascinating area of research because they involve many areas of astronomy, and because they represent an extreme even in the already-extreme context of black holes.

Just to bring this far-flung discussion back home, I’ll share a reminiscence. When I was doing my graduate work in London, a colleague named Ruben was doing research on jets and active galactic nuclei. I pinned a poster on his door of the ever-prescient Frank Zappa's “Cruising with Ruben and the Jets.” I’m not sure if Ruben ever knew what to make of this—so Ruben, if you’re reading, perhaps by now you've become a fan of Zappa.

Once upon a time, for instance when Moby-Dick was written, whaling was seen as a romantic, even glamorous, avocation pitting man against nature and when successful, heralding the triumph of order over chaos, reason over confusion. Whalers like Ahab made it their business to learn all they could about their massive, yet elusive, quarry to increase the chances of a successful hunt. Today, our reasons for learning about whales have evolved, and instead of wanting to hunt them, we now want to understand more about their place and role in the natural world around us. Yet, even today, whales, with their mammoth proportions and fascinating behaviors—no longer viewed as dangerous enemies or faceless commodities—continue to inspire awe in those lucky enough to see them.

Modern-day black hole science has its own romantic, even glamorous overtones, as it strives to expand our understanding of these mysterious, enormous, light-eating leviathans of our Universe, objects whose origins, composition, mass, and properties defy imagination, and whose very existence was so hard to fathom that for decades, many scientists simply refused to believe in them.

The controversy over whether black holes exist has been put to rest through astronomers’ and engineers’ hard work and ingenuity to find ways to predict and find these objects. Now the focus is changing from proving black holes exist to detecting a wide range of them and learning more about each kind. Despite all the progress we’ve made so far in learning about supermassive black holes, and notwithstanding their gargantuan mass, we've so far directly “weighed” only about 100 of them.

Just as Cetacea science has benefited from advances in technology—autonomous acoustic recorders, tracking devices that communicate with GPS satellites, and so on—so astronomy, too, has benefited from tremendous advances in technology. For example, we’ve been able to link together many different radio telescopes to make The Event Horizon Telescope, and we now have the first image of an event horizon, of the supermassive black hole at the center of Messier 87, a galaxy in the nearby Virgo galaxy cluster. 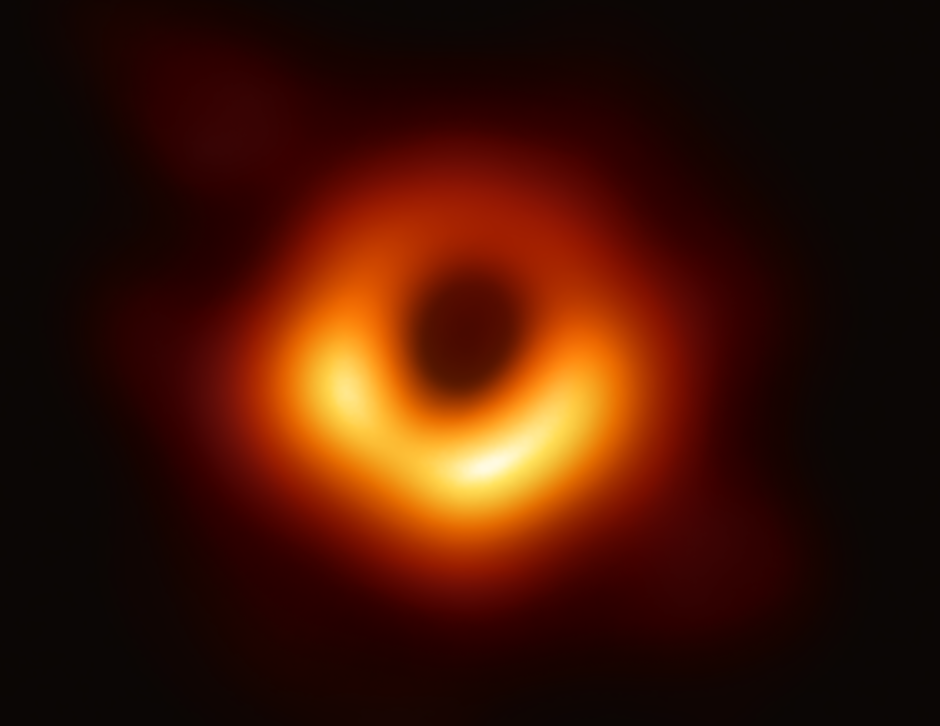 In addition, LIGO has now made a handful of detections of mergers of black holes.

With TMT and other next-generation observatories, we expect to increase the black-hole census to several tens of thousands, and expand our understanding of how black holes form, and their ages, locations, masses, and ways of interacting with their environment as they grow. We’ll also try to tackle the question of how the masses of black holes vary through cosmic history. In a future article, I’ll go into specifics of how TMT will help deepen our knowledge.

This current series of articles has only scratched the surface of what we know and don't know about black holes. Let’s end with an extract from the very final paragraph of Moby Dick, which speaks to the profound influence of nature’s leviathans, be they White Whales or a Black Holes:

I was then, but slowly, drawn towards the closing vortex. […] Round and round, then, and ever contracting towards the button-like black bubble at the axis of that slowly wheeling circle, like another Ixion I did revolve.

Many thanks to my colleagues Matthias Schöck (TMT System Scientist), Warren Skidmore (TMT Instrument System Scientist), and Nicholas McConnell (STEM Workforce Development and Program Manager at The Institute for Scientist & Engineer Educators), for helping with this blog entry