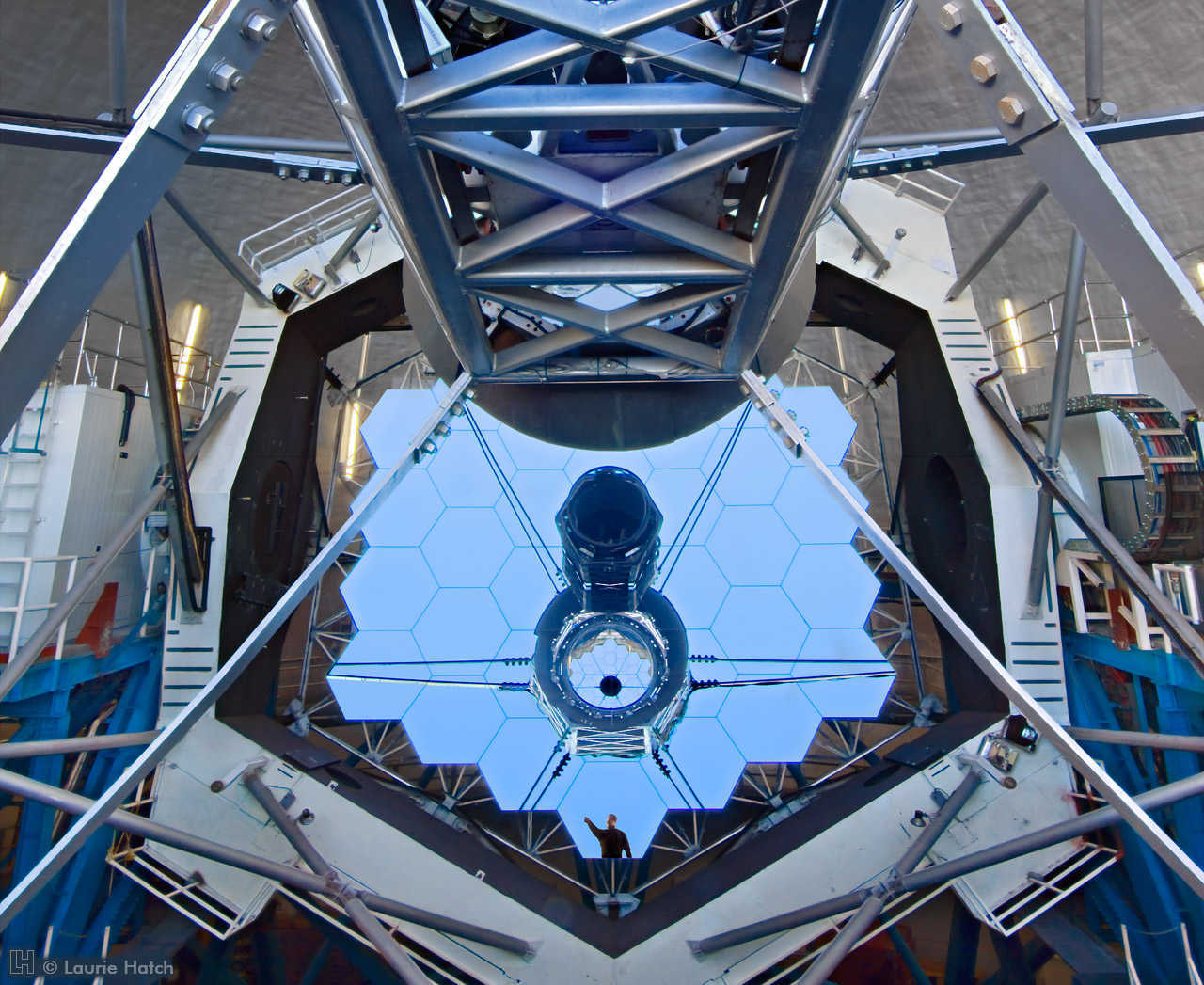 “Wax on, wax off,” said Mr. Miyagi to The Karate Kid (1984), to help the kid develop efficiency of movement, attention to detail, and grace—while also polishing Mr. Miyagi’s classic car.

What could this possibly have to do with TMT?  Elsewhere in this blog, I have talked about shipping glass from Japanese industry to the TMT teams across world that will polish that glass. Here I will describe how we’ve designed the mirror segments to have excellent optical performance, and particularly how we polish those segments in a repeatable, timely manner. It takes efficiency of movement, attention to detail, and grace.  These things are important because we need every mirror segment to perform at a high level without being cost-prohibitive to produce.  Just as Einstein’s work on general relativity showed time and space to be intimately linked, so project management views time and cost as being intimately linked.  Building an observatory like TMT is expensive, of course, so we must use the funds we have carefully.

The way we polish glass to the correct optical prescription is determined in part by the design path we have chosen. If we design a mirror segment to be spherically concave, the glass will have a rotational symmetry about an axis that is perpendicular to the glass. Spheres inherently have rotational symmetry.  Think of a basketball player spinning the ball on her fingertip.  The ball is the same in all directions relative to the finger.  The same thing would be true if the finger could somehow go all the way through the middle of the ball and you could watch the ball spin from the inside.  Seen from the inside, the sphere would be concave, rather than convex, but it would still be rotationally symmetrical.

Each mirror segment looks to the untrained eye something like a hexagonal pancake, but the reflecting surfaces of the mirror segments aren’t flat like a pancake: they’re curved.  And in their final finished state, the curved surfaces of the mirror segments will not be spherical.  In other words, the segments won’t have rotational symmetry.  Instead, they’ll be aspherical—that is, non-symmetrical—for reasons I’ll explain in a moment.  For purposes of polishing, though, it helps a great deal if the segment surfaces are made temporarily spherical, so a cross-section would look like this: 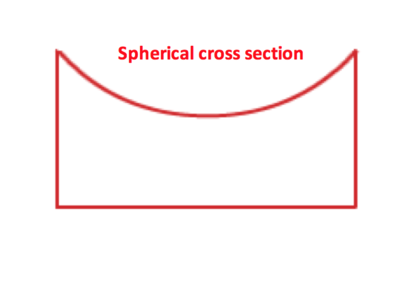 It’s as if someone has pressed a round ball into the center top of the segment, making it all smooth and forcing it to have rotational symmetry.

We don’t design the segments to be spherical because different light rays would be focused to different points along the optical axis of the mirror, therefore causing blurring of the image.  Instead, we polish each segment to an aspherical shape, which gives us improved optical performance despite those tiny, unavoidable polishing errors.  The performance is so much better that all of the next generation of large ground-based telescopes are using the aspherical approach. In TMT’s case, the amount of aspheric departure from a spherical shape varies from 6 mm (6 millionths of a meter), for the innermost segment, to 226 mm for the outermost segment.

Aspherical shapes are harder—and thus slower and more expensive—to polish and measure.  You can easily imagine how much more efficiently, even gracefully, a symmetrical, spherical shape is to polish.  The more aspherical the shape, the more challenging it is to polish.  To solve these challenges, we use a process called Stressed Mirror Polishing (SMP) to polish the optical surfaces of TMT’s mirror segments.  (The word “stressed” doesn’t actually refer to the people doing the polishing, although from what I’ve seen and given the fragility and expense of these glass pieces, it certainly is applicable.)

In the SMP process, the glass is pre-stressed, or actively “bent,” and the optical surface polished as a concave sphere. For each mirror segment, we need to follow carefully a number of very precise steps—much more involved than Mr. Miyagi’s “wax on, wax off,” but aimed at the same result: efficiency, attention to detail, and as perfect a finished product as we can make.

The fabrication approach we’re using on TMT was pioneered by a team led by Jerry Nelson at the University of California, Santa Cruz, and that team’s own words will help describe the process here.  See below for an excerpt from an article Nelson co-authored with Jacob Lubliner in the journal Applied Optics from 1980 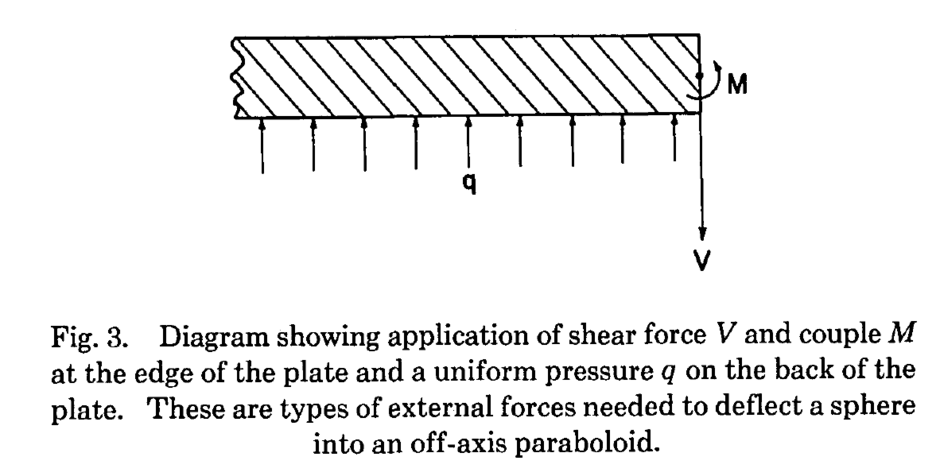 These forces result in a particular magnitude and direction of stress distribution in the glass. Hold that stress in place. Polish to a spherical surface. Release the stress. Wait until the glass springs back fully. You are left with an aspherical surface, even though you only had to do the easier spherical polishing.  Graceful; achieves the correct detail.  And, for reasons I’ll talk more about in a moment, efficient.

This approach was pioneered in the generation of the 36 mirror segments for each of the two 10m telescopes of the W.M. Keck Observatory in Hawaii. Here’s a photo showing those segments. 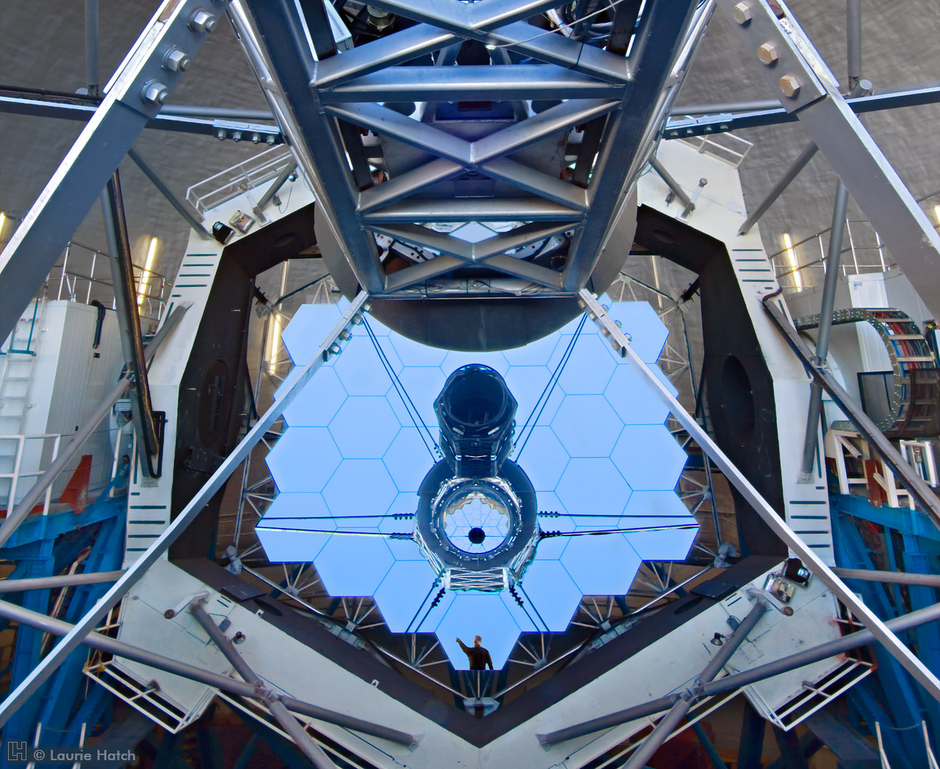 This image was kindly provided by Laurie Hatch; you can see more of her photos of Keck here.

Here’s a nice photo she took of Jerry Nelson: 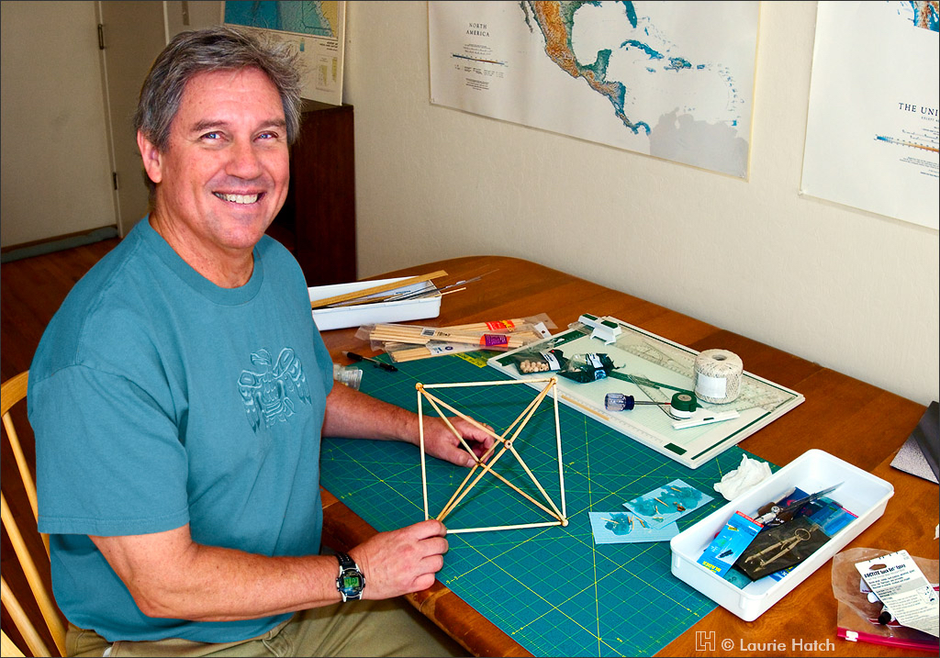 Jerry received the Kavli Prize in Astrophysics for these and other important contributions to building large telescopes, and was a driving figure in the development of TMT for many years. Jerry passed away last year, a month before a symposium in his honor was scheduled to take place in California.  Many of us all over the world still feel his loss deeply, myself included.  Jerry was a mentor to many of our own team members, some of whom worked with him on the Keck Observatory. We honor his legacy and vision in applying that knowledge to TMT, not just in the technical and scientific work that we do, but also in the way we treat our team members across the world, with courtesy, respect, and gratitude for the opportunity to work together on such an amazing project.

Getting back to SMP, it has the edge over conventional optical fabrication in several ways. It can be done with large conventional tools, which allows for time-efficient polishing, a self-evident importance when you’re making 500 segments and trying to keep costs down.

Contrast this with the traditional approach being used by other large telescopes, both ground based and space-based, in which they have to blend a combination of small figuring and large smoothing tools to generate optical surfaces, and are therefore difficult to make repeatedly for hundreds of segments.  The polishing of multiple segments with this traditional approach was a major challenge for the 17 segments of the James Webb Space Telescope, shown below. 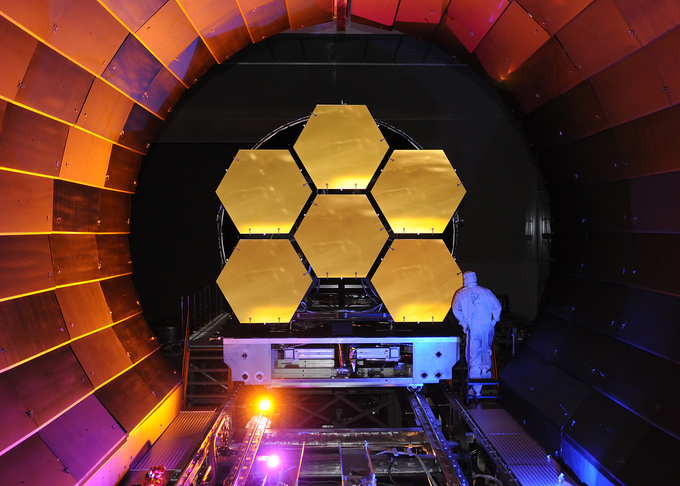 Under this traditional approach, TMT would become virtually impossible to build affordably.  In addition, the SMP process smoothes out fine ripples in the optical surface, technically referred to as “mid-spatial frequency features,” such that we get very smooth surfaces.

SMP lets us standardize and repeat the fabrication setup to generate many aspherical optics, again important given TMT’s very large primary mirror, which has to function as a single, elegant unit.

And given the nature of SMP, we could (once again) even say grace under pressure.  In a few words to sum it up, SMP is nothing short of an enabling technology: that is, a technology that lets us really jump forwards in what we’re capable of building.  And it’s an important part of what makes TMT possible.