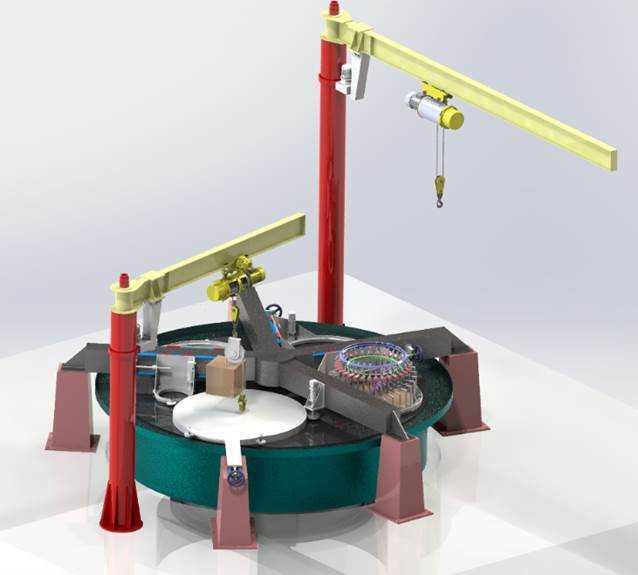 Until recently, eyeglass lenses were actually made of glass—remember the “Coke-bottle-bottoms” some people had to wear?   Given the fragility and other quirky qualities of glass, you can imagine the delicacy with which the optician had to grind every lens blank to achieve exactly the right specifications.  Now picture 492 glass pieces – actually, mirror segments once they have the reflective coating added —each weighing as much as a dozen car batteries and twice the size of the windshield of your car, and you have a rough idea of the challenge facing the teams who will fabricate TMT’s primary mirror.  How on Earth can we find a way to shape and polish, to exact specifications, these mammoth hunks of glass?

The answer to this question is that at least 86 of TMT’s glass mirror segments are going to be ground like giant optical lenses—but three at a time on a giant granite grindstone. A dedicated optics facility under construction in Nanjing, China, will do the shaping and polishing work on those mirror segments.

For those who haven’t been to Nanjing, it’s one of China’s major cities, home to higher education and industry, as well as many treasures from China’s history.  In 2003, when I was working as a cryogenics engineer for the European Space Agency, I made my first visit to China for a technical conference on cryogenic cooling systems in Zhejiang Province.

I arrived early and couldn’t decide whether to stay in Shanghai, where my flight had landed, or explore elsewhere.  I was curious to see how China’s economic growth had impacted its traditional social structures and way of life, and how China would compare to the frenetic chaos I’d observed during prior visits to India. I didn’t flip a coin or point blindfolded to a map, but instead walked up to the ticket counter at the bus station, and on a whim, pointed to the Mandarin character for Nanjing.

What I found there was a vibrant city, with traditional architecture and beautiful artwork setting the stage for the daily dramas of the city’s burgeoning population of both human beings and cars. I enjoyed watching taiji in the parks early in the morning, and benefited from some instruction myself at Nanjing University, building on the classes I had taken with Master Wang Lijun while working as a postdoctoral researcher at Caltech.

Nanjing is also the home of the Nanjing Astronomical Instrument Research Center and the Nanjing Institute for Astronomical Optics and Technology (NIAOT), where a team led by Professor Li Xinnan as already made a major contribution to astronomy in leading the design and construction of the Large Sky Area Multi-Object Fiber Spectroscopic Telescope (LAMOST).

LAMOST has 37 hexagonal segmented mirrors, which were all generated on NIAOT’s continuous polishing (CP) machine, a sort of enormous lens grinder—but on a much more exacting scale. The blanks for LAMOST are a type of glass called LZOS, and came from the Lytkarino Optical Glass Factory, in Russia – yet another example of international collaboration in astronomy. 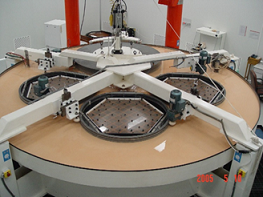 Starting from those flat pieces, the LAMOST segments were polished to their curved prescription, using the traditional approach of a CP machine with radius pre-shaped into the top surface of the machine table: that radius is then “transferred” to the glass through the polishing process. That CP machine had a diameter as large as 3.6m, and the segments are sized at 1.1m (this is the distance between opposing faces of the hexagon) so that three such segments could be polished at the same time.

Here’s a photo of the completed observatory. 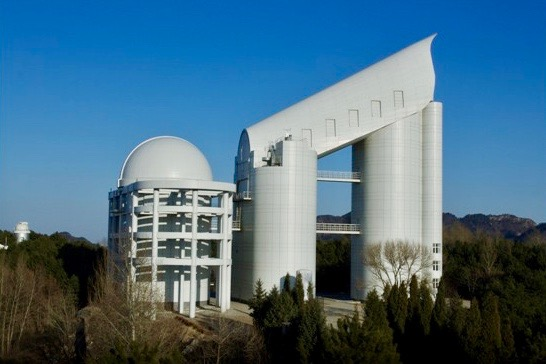 LAMOST has now been used to conduct a survey of the chemistry of stars in our own galaxy, but with the observatory located only a couple of hours’ drive away from Beijing, the residual light pollution and dust pollution have created poorer seeing conditions than originally expected. In the meantime, other TMT research and development being undertaken at NIAOT includes important contributions to the optical design of our first-light science instruments.

Professor Li investigated how to polish off-axis segments using what we call Stressed Mirror Polishing (SMP). An SMP fixture was specially designed and integrated with the CP machine (in this case, with the segment facing downwards). The team successfully polished a 300mm diameter off-axis segment using 1.0m diameter CP machine, and this demonstrated the feasibility of the approach. 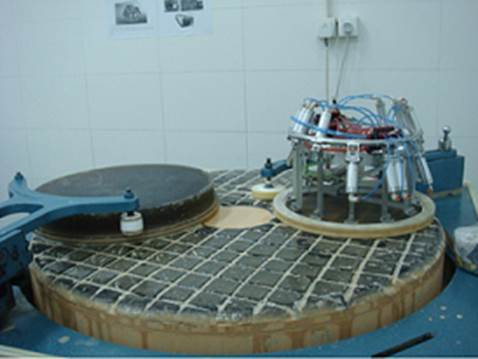 I was part of a review team that visited NIAOT in 2013 to assess the technical and programmatic progress in their stressed mirror polishing activities. This was my first international trip on behalf of TMT. Our committee’s report from that review noted that “TMT recognizes and appreciates the insightful and creative research and development work that Dr. Li’s team at the NIAOT Mirror Laboratory has put into this SMP fixture. With it, NIAOT has made progress polishing mirrors with the 1.1m Stressed Mirror Polishing (SMP) fixture using the Continuous Polishing (CP) machine. Many of the issues associated with SMP CP polishing have been addressed.”

The glass pieces for TMT’s primary mirror are all being fabricated by Ohara in Japan, but the 86 mirror segments for which China is responsible will be polished at NIAOT’s facility in Nanjing. NIAOT couldn’t do its work for TMT without the support of other entities, led by the Chinese Academy of Sciences and one of its institutes, the National Astronomical Observatory of China.  The latter organization formally represents the People’s Republic of China in the public-private partnership that is the TMT International Observatory, LLC.  This National Astronomical Observatory of China is funding the optical work being done at NIAOT. The remaining primary mirror segments across TMT’s international partnership will be polished at each of three other institutions located in Japan, India and the U.S.

Professor Li’s team is now ramping up its work on the 86 mirror segments from China for TMT. A new dedicated optics facility is being developed to support this TMT work, located at the Nanjing Astronomical Instrument Research Center facility in south Nanjing. 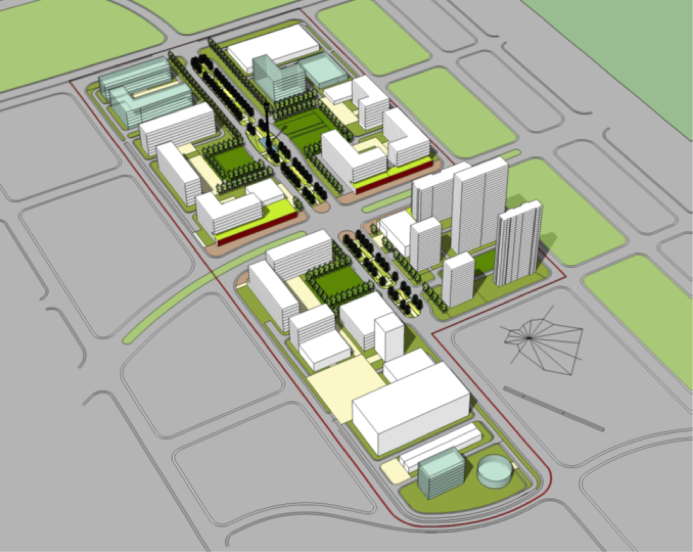 At this research center, Dr. Li’s team is building an even larger continuous polishing (CP) machine, a sort of enormous lens grinder—but on a much more exacting scale.  When NIAOT’s CP machine is finished, it will be among the largest in the world, featuring a somewhat donut-shaped granite base measuring 5.1 meters across.  You can see the base in various phases of preparation in the pictures below. 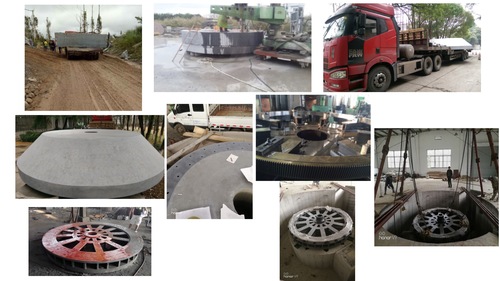 From top left side: Large granite slab is mined, Granite slab is coarse cut, Transportation of granite to Nanjing, Granite Slab has been ground down to a 5m rotational table, Rear Surface of Granite Table Polished, Large Rotational Gear under Fabrication, Rotational Table Base Structure & Centre Connection, Base being lowered into pit, Base in position.  Image Credit: Nanjing Institute of Astronomical Optics & Technology, National Astronomical Observatories, Chinese Academy of Sciences

When everything is integrated and in place, the layout will be as shown below in the cross-sectional drawing of the continuous polishing setup. 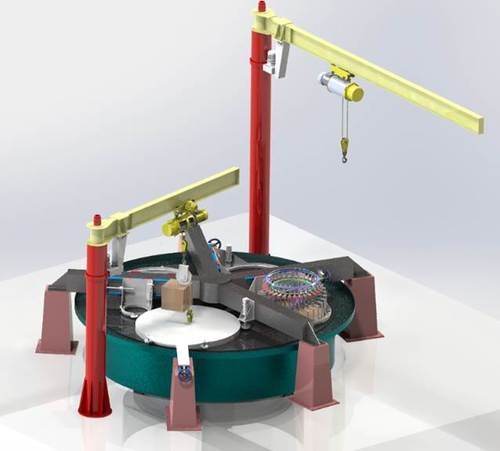 The optical design of TMT means that primary mirror segments at different distances from the center of the mirror will need to have different optical prescriptions. What makes things even more complex is that we want each mirror segment to have a surface that is non-spherical ("aspherical") in order to improve the mirror's ability to reflect light to exactly where we need it to go to on our secondary mirror. Moreover, the segments are not directly in the path of the center axis because that particular location is taken up by our tertiary mirror. In any case we need to build up hundreds of segments because of the sheer size of the primary mirror.  In fact, the further away the segment is from the center axis, the greater the degree of departure from a sphere that the optical shape needs to be.

As a general principle of optical fabrication, it is much easier to grind glass to a spherical shape than an aspherical shape because we can take advantage of the symmetry inherent in a spherical design. So, given the hundreds of segments needed for TMT, we need a fabrication approach that sidesteps the difficulties of directly polishing an aspheric prescription into each piece of glass.

An approach called stressed mirror polishing is being adopted by all TMT teams producing segments of the primary mirror. I've described this process in the previous blog article. Let’s look at how this is being implemented at NIAOT.

The Nanjing team has shaped the surface of the entire granite table itself to a convex shape of constant radius of curvature.  This granite is covered with optical pitch, a material that can flow slightly and transfer polishing compound to the glass during polishing. On top of this pitch are three polishing “stations,” each with a glass blank positioned face down. The Nanjing team will carefully pre-stress each glass segment in a particular way, so that the glass changes shape. The amount of pre-stressing is high enough to change the glass shape elastically, but not enough to fracture the glass.

Next, each pre-stressed blank is individually rotated about its vertical axis at the same time that the large polishing table rotates. The contact between the pitch and polishing compound generates mechanical friction and a chemical reaction, which together remove glass so that the lower face of each blank becomes the opposite of convex: i.e., concave. Eventually, that lower face of the glass then has the same spherical curvature as the granite table surface. At that point, the Nanjing team stops rotating the glass and the granite table and releases the stress from each piece of glass. Each glass segment then springs back elastically to its unstressed state, and because the glass surface has been polished spherically whilst under the pre-stressing, the glass surface will now spring back to a shape that is off-axis and aspheric—just how we need it to be. By choosing the stressing levels and directions carefully, we can go through this process to generate an aspherical face of glass that is exactly of the optical prescription needed for that segment when it will be positioned at its final location in TMT’s primary mirror.

The large size of the granite table allows three pieces of glass to be ground at the same time. The simplicity of operation also means the equipment can be operated continuously for long periods with only minimal oversight. As such, lots of aspherical segments can be manufactured relatively easily and economically.

NIAOT’s involvement with TMT was not a foregone conclusion. The Chinese optical astronomical community has debated whether to build its own telescope or whether to contribute substantive funding to TMT’s international collaboration. Initially the community opted to build its own 12-meter class observatory, but turmoil has ensued over the design to be used. At the same time, the work on TMT continues across several Chinese institutes, with teams dedicated to advancing the work on the primary mirror segments, tertiary mirror, laser guide star system, and science instrumentation.

The first pieces of practice glass have now arrived in Nanjing from Japan. To mount that glass, the TMT Project Office in California has loaned to NIAOT one of the prototype segment support assemblies that was fabricated in India. Soon, the team at Nanjing will commission the complete optical setup, and then be ready to polish the glass, producing three polished pieces at a time. The final, minute adjustments to the surface shape of the glass will be performed in the United States. As you can see, the international collaboration that allows all of this to take place is complex, but it is exciting to see all this come together, and an honor to be a part of.

Sharper Focus -Part 1- The Why and How of Adaptive Optics