An ESW Preliminary Design Review phase1 (PDR1) was held at the project office on September 27, 2018. ThoughtWorks, ITCC and TMT Engineers presented the overall Executive Software architecture and operations concepts, as well as their updated requirements and technical use cases.

The ESW design is a product of the TMT Project Office. Its development is managed by the India TMT Coordination Center (ITCC) at the India Institute of Astronomy (IIA) in Bangalore, India, which contracted ThoughtWorks (in Pune, India) to provide the software development effort. ThoughtWorks is also the company developing the TMT Common Software, which is the software infrastructure of the TMT observatory.

The ESW is one of the first light TMT Observatory Software sub-systems. Its design and development is split into two phases, with the first phase, the subject of this review, focused on the subsystem that coordinates the TMT sub-systems and the integration of the browser-based user interfaces with the TMT Common Software. The Observatory Control System (OCS) is the Executive Software central engine providing this coordination functionality.

By synchronizing the operation of all the TMT sub-systems, the ESW OCS provides the core functionality needed to enable Principal Investigator-Directed observing, Pre-planned Service Queue observing, and other future observing modes at the telescope site.  Other Executive Software deliverables, including user interfaces for system operators and observers, as well as user interfaces for monitoring of system status and overall environmental monitoring, are part of ESW’s second phase.

The Executive Software is composed of five elements:
• The Observatory Control System,
• the User Interface Standards,
• the High Level Control and Monitoring system,
• the Data Visualization tools, and
• the Science Data Acquisition Tools.

Aside from providing the OCS sequencing infrastructure, which is the term used to describe what the software system must do to control the telescope, its subsystems and science instruments, a big part of ESW is to provide the user environment and observing workflow. As such, ESW is at the forefront of TMT operations and all user services.

The review board acknowledged that the ESW PDR1 activities have been adequately documented, and the ESW designs and technical choices presented during the review were clear and satisfactorily detailed at the level needed within the planned development approach. The preliminary design work was recognized as appropriate for moving the phase 1 ESW software toward final design.

The face-to-face review consisted of presentations by the technical team and questions by the committee and review observers. One hardware and several other software demos were presented during the review, showing real-time execution of sequencer scripts written in a Domain Specific Language (DSL) similar to what will run at the TMT summit facility.

Kim Gillies, TMT Lead Software Architect, acknowledged that ”the work leading to this review has really been a team effort. Everyone has been working hard, not only for the ESW design, but also to build the team that will ultimately develop the operations software for the TMT.” 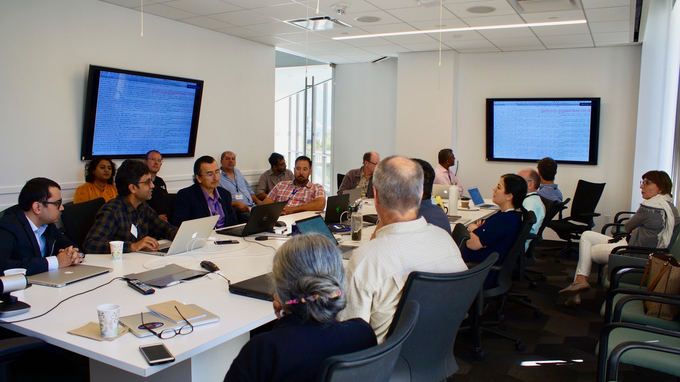 The ThoughtWorks technical team presents a demo of its software programs before the review committee and observers. 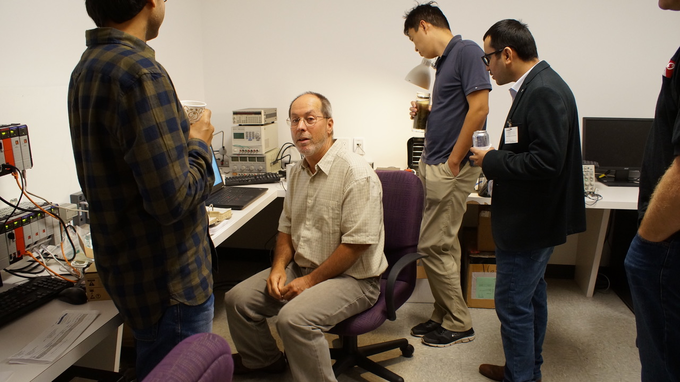