The TMT Enclosure calotte design, selected after extensive trade studies, is a spherically shaped building that surrounds and protects the telescope and instrumentation during non-observing time and in severe weather conditions.  During science operations, the enclosure aperture opens to allow the telescope a clear and unobstructed view of the sky.

Fundamental features of this calotte design include:

The TMT enclosure has been designed to minimize its mass and size, with enhanced control and performances during scientific observations. This unique design will enable rapid changes of pointing direction, while providing a maximum protection from wind-induced vibrations and dome-seeing degradation, which could otherwise impact the performances and image quality of the telescope.

“TMT’s enclosure is unique among the Extremely Large Telescopes being built today,” says Luc Simard, Director General of the Herzberg Astronomy and Astrophysics Research Centre. “It will facilitate the observations of astronomical phenomena requiring a rapid response and will deliver optimal conditions for Adaptive Optics observations at an unprecedented spatial resolution. TMT's enclosure design will be key to the scientific success of TMT.”

TMT’s enclosure design was completed by Empire Dynamic Structures of Port Coquitlam, BC, Canada as a Canadian in-kind contribution to the TMT Project, managed by the Canadian National Research Council (NRC).  The work was conducted through a contract between Dynamic Structures and the Canadian Commercial Corporation (CCC) on behalf of the NRC.  Dynamic Structures assembled an excellent and dedicated team of structural, mechanical, electrical, systems, controls and CAD engineers to complete the work. The TMT Enclosure System is a dome structure housing the telescope. The three principal enclosure moving components are the rotating base, cap and shutter structures. Combined rotation of the rotating base and cap provides a range of required azimuth and zenith angles. The shutter is a rotating structure enabling opening and closing of the telescope aperture  -  Image credit: TMT International Observatory

Relative motion of the cap and shutter is used to either close and seal the enclosure or open the shutter aperture during science observations.  The shutter structure is located directly inside the cap structure.  It consists of an open steel framework supporting a steel plug structure. The shutter rotates about 180° around the same axis as the cap, enabling opening and closing of the telescope aperture. The cap also includes a set of deployable external flaps designed to divert incoming air flow and provide wind protection for TMT secondary mirror. 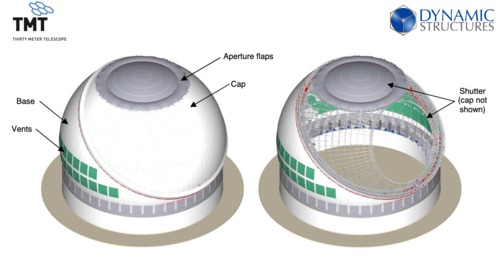 There are a total of 88 inner and outer ventilation doors which are used to provide controlled ventilation of the enclosure during astronomical observations. These vents can be opened or closed to modulate the amount of outside ambient air flowing through the enclosure and maintain a steady flow and air temperature within the optical path. Calculations using Computational Fluid Dynamics modeling have shown good wind flushing properties inside the TMT dome and around the telescope to eliminate thermal effects on the seeing.

The telescope enclosure, which is 66 meters in diameter (about the width of a soccer field), has a height of approximately 56 meters above the surrounding ground and a total mass of 2900 metric tons.  It is able to open its 31.25 meter diameter aperture in less than 2 minutes and will allow the telescope to point an astronomical object in under 3 minutes.

The enclosure is equipped with 3 crane systems to facilitate the maintenance and technical operations of the telescope and instrumentation systems.  The enclosure safety requirements are fully defined and provide adequate safety for the observatory personnel and visitors, including local emergency stop buttons, sensors and wiring that interface with the observatory safety system.