Rendering of the Thirty Meter Telescope showing the Nasmyth platforms (in blue) and two of our early light instruments - The TMT Wide Field Optical Spectrometer (WFOS) is located on the right platform while the Adaptive Optics system (NFIRAOS) plus the InfraRed Imaging Spectrograph (IRIS) are located on the left platform - Image credit: TMT International Observatory

One of TMT’s three “Early Light” instruments, the Wide-Field Optical Spectrometer (WFOS), recently underwent an interim Conceptual Design Review via Zoom. The review’s purpose was to assess the instrument’s progress to date and to provide guidance on potential work needed to successfully complete the technical and scientific aspects to bring the overall design to a full Conceptual Design level. The review identified additional science cases, recommended additional functional requirements and provided an initial assessment of the new opto-mechanical concept.

The scope for the WFOS interim review included assessing the following: 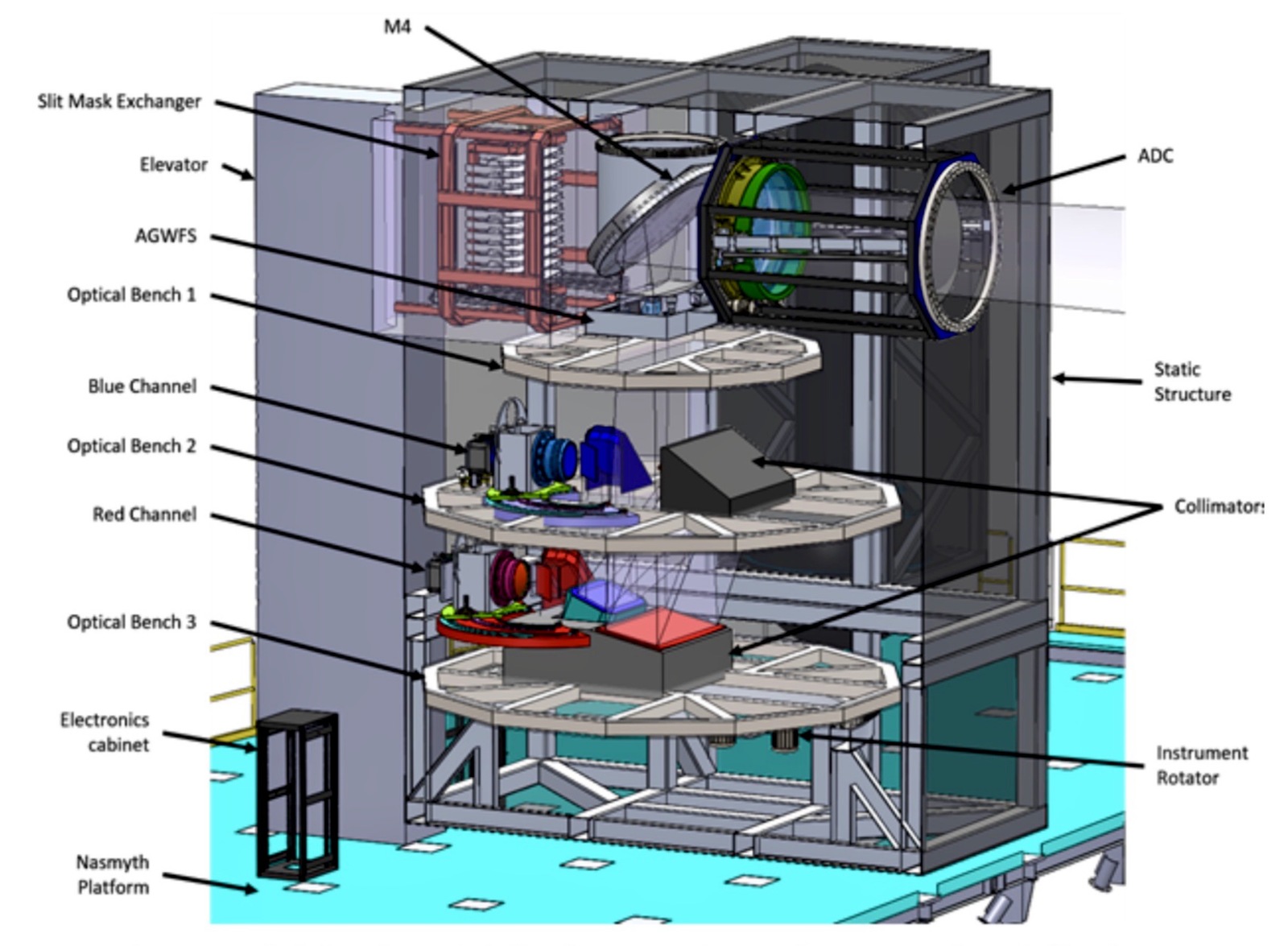 Detailed cross-sectional view of the WFOS Instrument - The WFOS design now features a vertical orientation that enables the instrument to be gravity invariant as it de-rotates the field during observations - Image credit: TMT International Observatory

WFOS is envisioned as a workhorse instrument and is designed to provide highly flexible scientific capabilities while striving to maintain an overall low risk design. In 2018, WFOS underwent an extensive trade study between two fundamentally different architectures. These two concepts included exploring a bank of small, fiber fed, spectrographs and the current large ‘monolithic optic’ design. Since this down-select the WFOS team have diligently worked to produce an interim design concept that addresses and retires earlier identified risks for the chosen monolithic concept. The key design adaptations are summarized as follows: 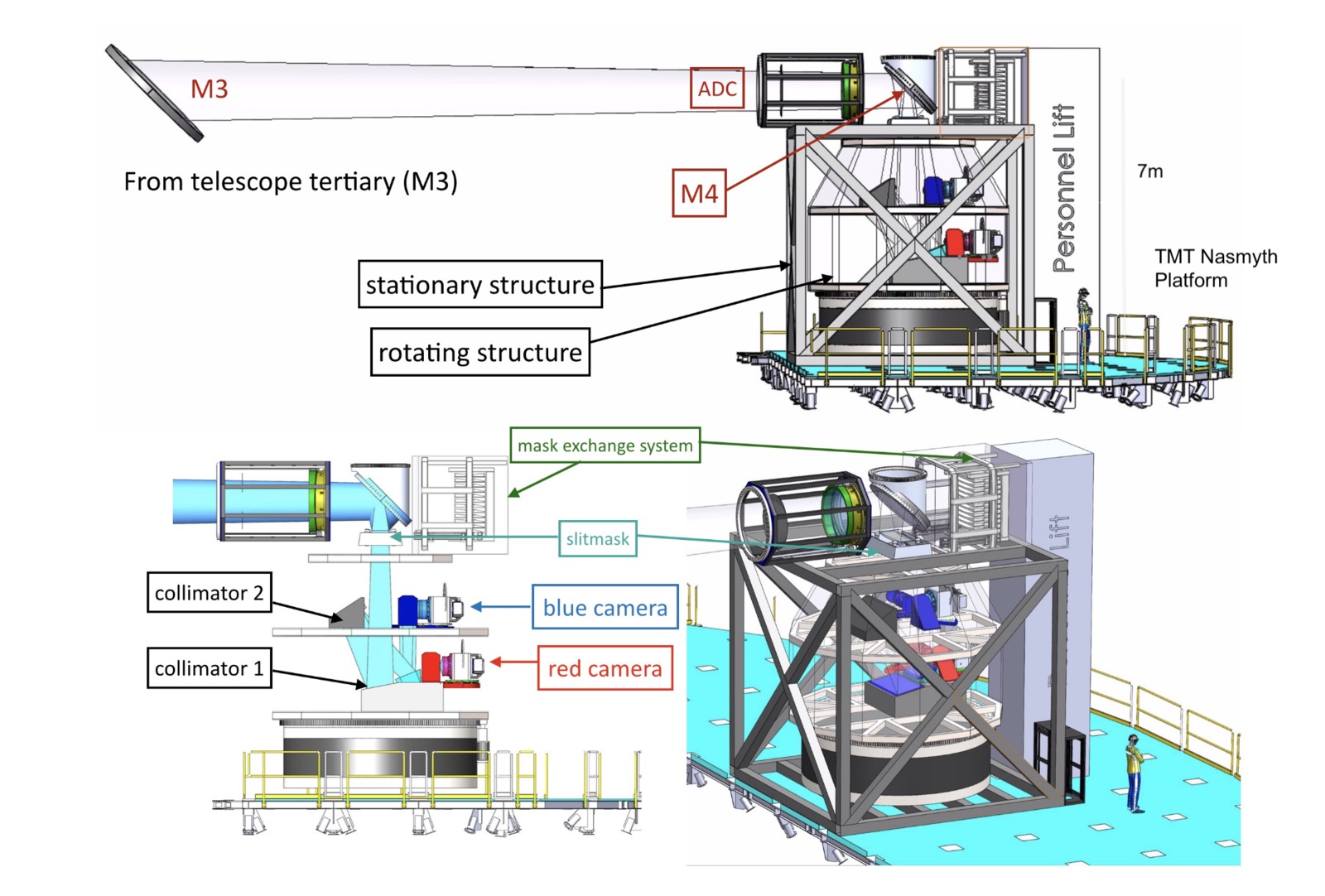 As described by one of the WFOS review panel members, the “WFOS technical team deserves a huge heartfelt congratulations for improving the design of WFOS on pretty much every axis. The descopes made from the WFOS-2013 design are smart, the instrument looks way more buildable, and the predicted performance is outstanding and realistic. I also want to commend the team for using a high-tech solution (the freeform collimator) to cleverly rebalance the risk! WFOS will be an instrument that will cause, what the young people call, FOMO (fear of missing out).”

More about the current design

WFOS will support three main modes of operation: direct imaging, long single slit spectroscopy, and multi-slit spectroscopy. The workhorse spectrograph will support several spectral resolutions including R = 1,500 and R = 3,500; with the R = 1,500 mode capturing the entire instrument bandpass in a single exposure. The current design also satisfies a goal of providing a spectral resolution mode of 5,000. The described modes use 0.75” slit widths; however, the instrument optics are designed to preserve image quality for narrower slits down to 0.25”, enabling higher spectral resolutions (up to 15,000) at the expense of throughput.

Science programs using narrow slits will benefit most from the implementation of ground layer adaptive optics correction as part of a potential future upgrade to the Observatory. WFOS is also capable of directly imaging its entire science field of view providing the Observatory with a wide-field imaging mode at early light.

WFOS will be the only TMT instrument capable of obtaining spectra at optical wavelengths (WFOS’s bandpass is 0.31−1.0 μm) for at least the first several years of TMT operations. For this reason, an important consideration for the design has been versatility, to ensure WFOS will be capable of addressing a very wide range of science.

WFOS core science themes include the study of:

WFOS will achieve the most sensitive optical spectroscopy ever attempted. It is expected that WFOS will often be used as the highest sensitivity spectroscopic capability, for the purpose of either initial identification or high-quality follow-up of new discoveries.

WFOS will promote advances in many different topics and will serve teams of researchers spanning a broad range of scientific interests. Its most exciting discoveries are likely impossible to predict, but among its many areas of investigations, WFOS will study the distribution and nature of dark matter in the universe, as well as the composition of high-redshift galaxies, the physics of supernovae and gamma-ray burst events.

The WFOS collaborating institutions are: 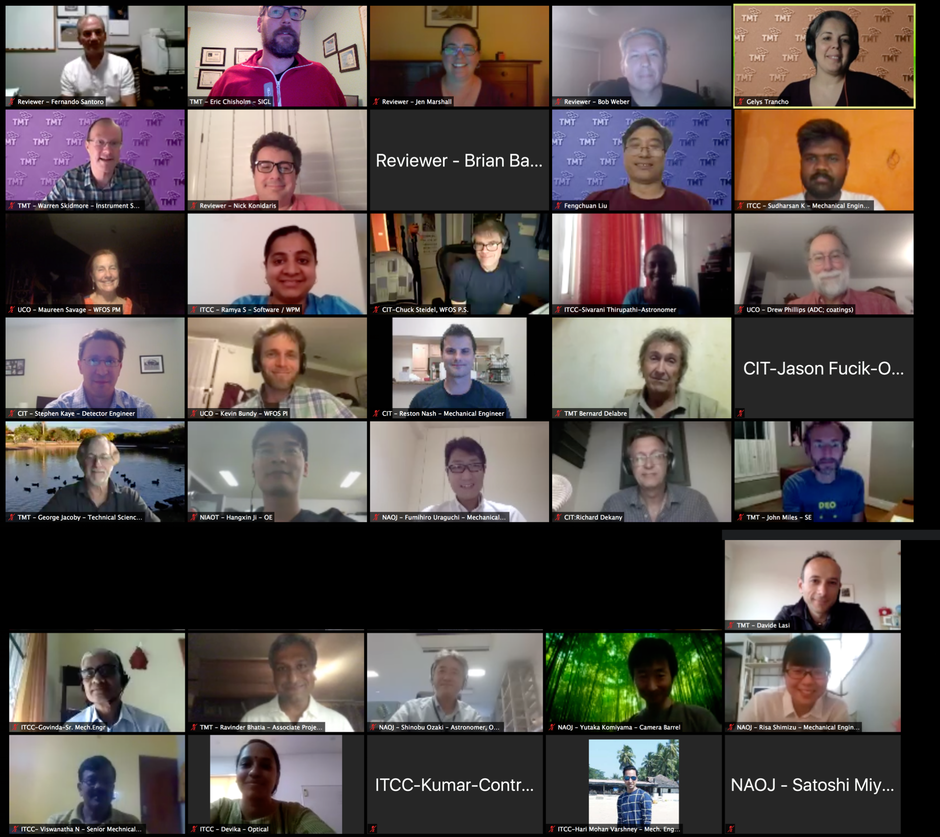 Screenshot of the participants in the TMT WFOS Instrument interim Conceptual Design Review – Over 30 engineers and scientists involved in designing the instrument from China, Europe, India, Japan and USA attended the review held on 27-28 May 2020  -  Image credit: TMT International Observatory