Every few weeks, M1, M2 and M3 mirrors will be carefully cleaned from dust and other contaminants that might gradually accumulate over time during TMT assembly and operation. The largest of those, the thirty-meter diameter primary mirror (M1) composed of 492 hexagonal mirror segments, is the centerpiece of TMT. Covering an area of nearly 670 m2, M1 requires a robust cleaning system that maximizes the reflectivity of the mirror surface for TMT to deliver exceptional science data. It is critical to keep all three mirrors as clean as possible for TMT to collect photons from the faintest objects in the cosmos.

Liquid Carbon Dioxide (CO2) has been identified as the operating fluid for the TMT mirror cleaning process. This colorless, odorless and non-flammable CO2 liquefied gas will be pressurized at the TMT Nasmyth platforms and delivered to the cleaning arms where it will be expanded to generate CO2 snow. The CO2 snow will be sprayed onto the mirror surface. Under strictly controlled conditions, four robotic arms will rotate like windshield wipers over the M1 area, and push the compressed CO2 through lines into spray nozzles. The CO2 snow cleaning procedure will take place with the telescope locked in horizon-pointing orientation, and the snow will drive any dust particle off the optical surface and toward the floor through gravity. During normal operations, the arms will be stowed at rest in a locked position at the outer circumference of M1, so they will not obstruct the optical path during night observations.

TMT’s Primary Mirror surface will be regularly cleaned by four robotic arms. The arm devices will sweep across the mirror and spray snow carbon dioxide through an arrangement of nozzles to remove dust and small particles. The CAD model of the arm supporting the CLN system is courtesy of MELCO  -  Image credit: TMT International Observatory 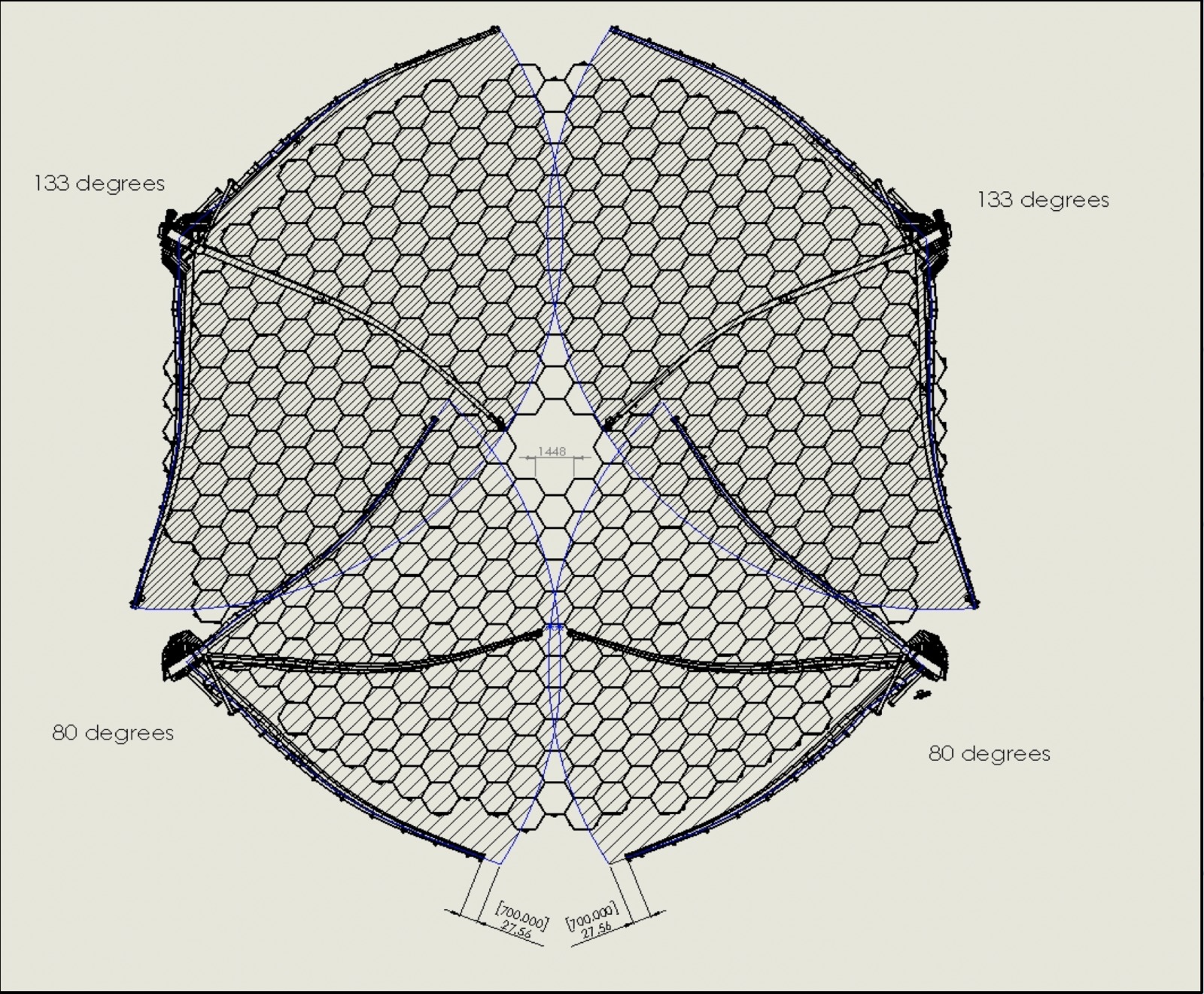 TMT’s fully-automated CO2 snow cleaning in-situ process will use four robotic arms carrying spray nozzles that will produce CO2 snow to drive any dust particle off the primary mirror surface. The cleaning system will move the arms across the surface of the mirror at a uniform distance and controlled speed  -  Image credit: TMT International Observatory

TMT’s CLN concept is based on the cleaning system currently used at the Subaru Telescope. CLN will provide the ability to regularly clean M1 in situ, without removing the mirror segments from the mirror cell. It is expected that a complete M1 cleaning, including set-up time, can be accomplished within six hours during daytime work, so as not to interfere with night observations. Manual cleaning of the M2 and M3 will be performed the day after the M1 cleaning.

During the PDR, Tomas Chylek, TMT opto-mechanical engineer leading the CLN group, gave a detailed overview of the CLN architecture, hardware, operational concept and requirements. Takashi Nakamoto from the National Astronomical Observatory of Japan also presented the CLN control system. The designed CLN system was shown to meet the strict technical, functional, environmental and operational requirements set for the Observatory.

The CLN control system is responsible for coordinating the motion of the cleaning arms in the telescope structure. Any hardware moving near the primary mirror presents a high risk that the mirror might get scratched or damaged during the cleaning process, hence CLN control shall take into account all reliability and safety aspects.

PDR participants evaluated the presentation on the software designs, such as the sequencing and coordination of the M1 cleaning operation, including the robotic arms operation. Nakamoto gave an updated introduction of the process control of the CO2 supply and the user interfaces to allow the future operators to manipulate the CO2 supply system and robotic arms. The review panel recognized that preliminary software design, including sequences to be implemented, have been well developed and use-cases are well understood. The design of the robotic arms and an independent safety controller will be provided and supplied by the Telescope Structure Group and were not subject of this review.

“Passing this review is a significant achievement for the project,” added Chylek. “TMT CLN efforts have progressed very well despite the many new technical challenges to develop a safe system for cleaning TMT’s extremely large mirror. The team will build upon these efforts to further develop a safe and effective CLN design for both the telescope and the personnel.”

Testing and prototyping work were performed at the TMT technical laboratory in Monrovia. TMT team has developed a large-area CO2 spray nozzle, which has been optimized to cover an area 500mm wide with a single nozzle. The dust removal efficiency of the new nozzle design was also thoroughly tested. The CLN team also presented the results of prototyping a full-size high-pressure CO2 cable wrap at the interface between the stationary telescope elevation structure and rotating CLN arms. 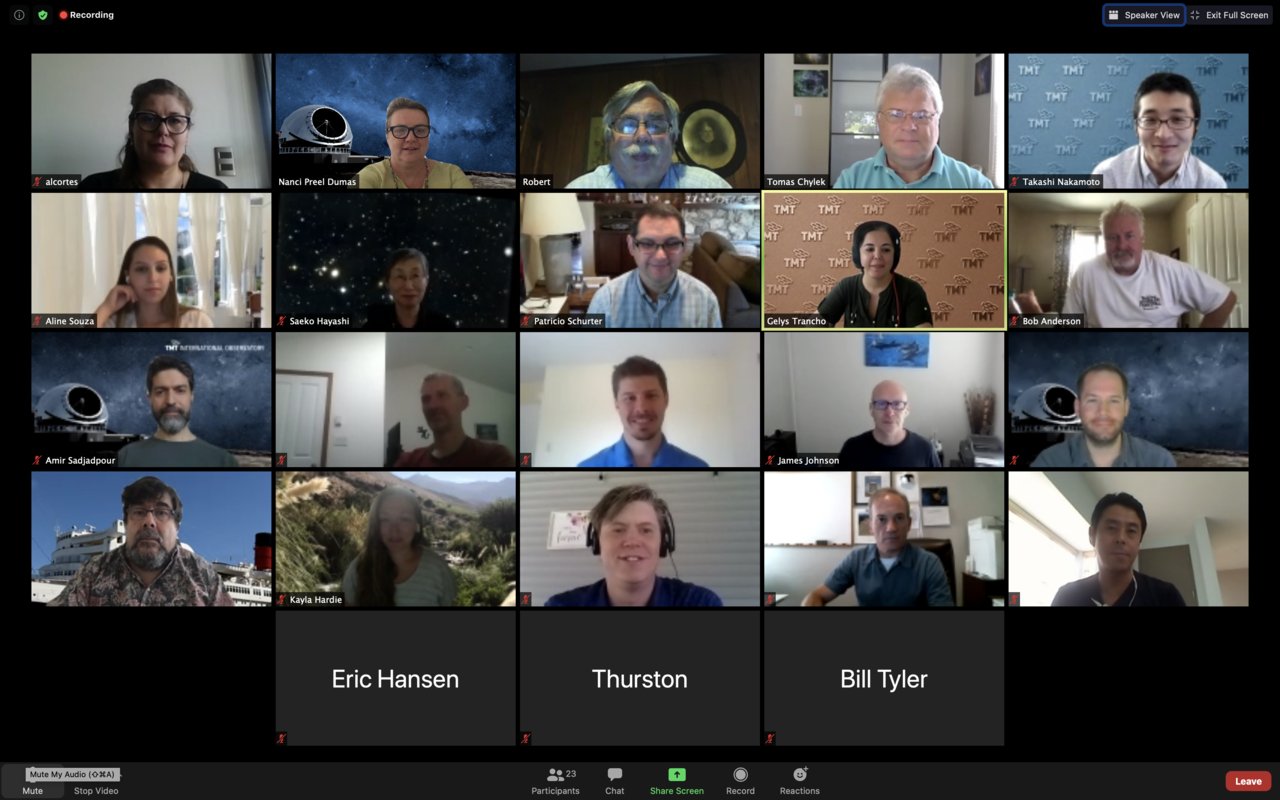 Screenshot of the participants of the TMT’s Primary Mirror Cleaning Preliminary Design Review on 19 August 2020. The review was led by TMT Engineers Tomas Chylek and Takashi Nakamoto from the project office. The review panel was composed of external experts from the European Southern Observatory, Gemini Observatory, Giant Magellan Telescope, and National Astronomical Observatory of Japan, in addition to TMT staff from the Safety, Structure, Controls and Software groups - Image credit: TMT International Observatory