Many major wildfires are devastating lands and homes across the entire west coast, including in California, Oregon and Washington. Although wildland fires are common at this time of the year, the fires experienced this summer are among the region’s most destructive.

The Thirty Meter Telescope International Observatory is deeply saddened by the current situation. Tens of thousands of people across the west coast have lost their homes and have had to evacuate to a safer place.[1] In California alone, over 17,000 firefighters remain in the field battling multiple wildfires under hazardous air quality conditions.[2] Our thoughts are with the affected families and the firefighters and volunteers on the frontlines.

The Bobcat Fire, one of the many ongoing fires in the region, started on September 6 and is still burning at a rapid rate in the Angeles National Forest near Pasadena. Our neighbor residents of the foothill communities have remained under evacuation orders or warnings over the last few days, and we continue to keep them in our thoughts.

In addition to ravaging homes and forest land, the Bobcat Fire has dangerously approached the Mount Wilson Observatory, located atop the San Gabriel Mountains right above Pasadena.

Glow of the Bobcat fire reaching the Mount Wilson Observatory on the morning of September 16 (left) and September 15, 2020 (right). The fire was less than 1/3 of a mile away from the observatory - Image courtesy by UC San Diego, High Performance Wireless Research & Education Network

Mount Wilson Observatory’s unique facilities and scenic beauty have inspired many people. Founded in 1904 by George Ellery Hale and the Carnegie Institution of Washington, Mount Wilson was the most famous observatory in the world for the first half of the 20th century. The observatory was home to a number of important discoveries, including the first measurement of the Milky Way Galaxy and the expansion of the Universe. At the time, its solar and nighttime telescopes were the largest in the field and their new designs shaped modern astronomy.

Thankfully, the Observatory boundaries have been secured and many professionals from LA County fire departments are dedicated to defending the site. TMT is incredibly grateful to everyone who works so hard to protect the historic site where modern observational cosmology began.

To the right is a recent letter from Sam Hale, Chairman of the Board of Trustees for the non-profit Mount Wilson Institute, addressing the current situation at Mount Wilson. 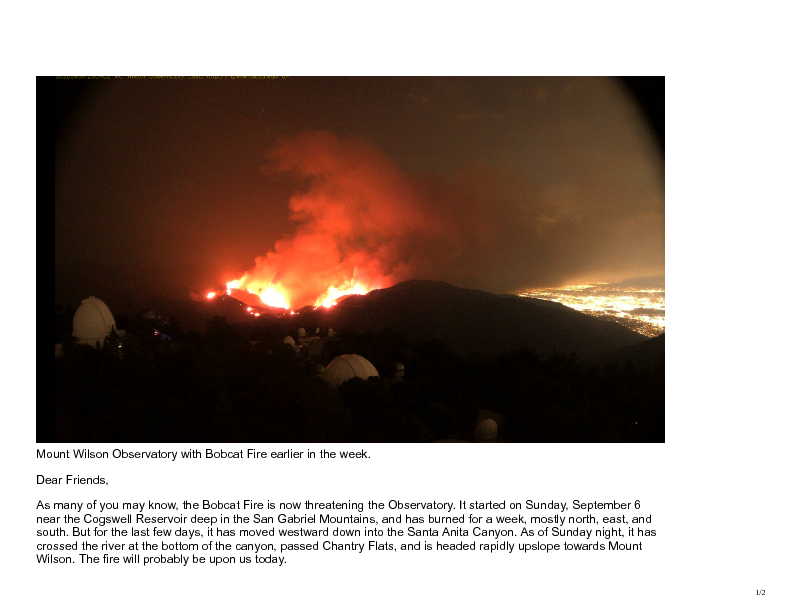 Letter from Sam Hale, Chairman of the Board of Trustees for the non-profit Mount Wilson Institute, addressing the situation at Mount Wilson on September 2020Mount Wilson.

The battle is not over yet; countless firefighters and community members are working tirelessly to contain these record-breaking wildfires. We hope that the region’s affected communities are staying safe and taking care of themselves.

You can get notifications from the Department of Forestry and Fire Protection of California and stay safe by signing up for emergency and weather alerts in your county at: https://www.readyforwildfire.org/.

Congratulations to Professor Andrea Ghez and the Astronomy Community!