Pasadena, CA – As an extremely complex organization of systems all interacting together, TMT will require an elaborate Telescope Utility Services (TUS) infrastructure to enable operations within the observatory, across the summit facilities, enclosure, and telescope. The first tier of TMT’s TUS successfully passed its Final Design Review, covering elements of the design that pertain to the Telescope Structure and its various interfaces, via video conferencing on Oct. 28 and 29, 2020.

All TUS final design phase activities were led by the Telescope Structure (STR) group supported by Systems Engineering for requirements and interface management, and by TMT’s M3 Engineering (M3E) contractor for the end-to-end system design.

“This was an impressive accomplishment by the TIO, M3E and TMT Japan/MELCO teams,” voiced Kyle Kinoshita, TMT Structure Group Leader, at the review out-briefing. “The high level of communication and collaboration between these teams resulted in an excellent STR TUS design and development.” The review panel also recognized the outstanding and hard work done in developing the TUS final design in such an efficient and collaborative manner.

TMT’s telescope structure (STR) is large and includes an elevator, an aerial service platform, stairs and walkways to provide access to all telescope subsystems. 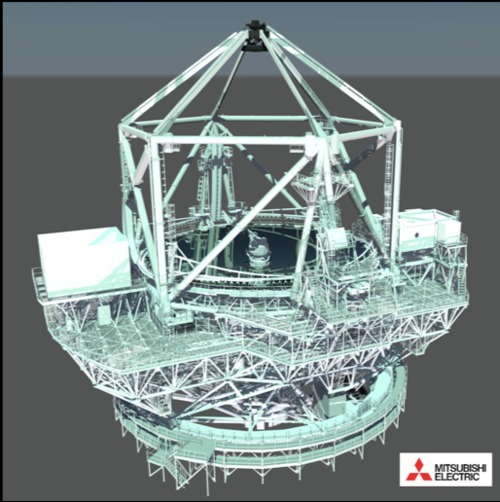 Its complexity is enhanced by its large number of interfaces with other systems, coupled with strict constraints on power, space, vibration, and heat dissipation. As the STR is highly advanced in its design (currently in production readiness phase), it was critical to secure clear documented interfaces between the telescope structure and the multiple utility services routed throughout the structure.

All types of utility equipment, such as cabinets and distributed cables for electrical power and grounding, fire alarm, and communication networks, as well as other piped utilities required by the telescope subsystems (chilled water, compressed air, oil, refrigerant and cryogenic cooling), will be installed on the telescope structure and must meet requirements such as limits on mass or heat dissipation to ensure observatory performance is met. TUS is responsible for routing all of these utilities, while various teams contribute to the detailed designs and provision of each service type as documented in TMT’s requirements and interface documents.

The TUS design team presented 3-D layouts of the space allocation required for supporting the distribution of all services throughout all major areas of the telescope structure, and how many cables and pipes will be needed. The transport of electrical power, chilled water and compressed air will be supported by pipe racks and cable trays routed throughout the telescope azimuth, elevation and fixed structures. The paths for all cables and pipes have been modeled and optimized to ensure the best use of the available space and a correct cable allocation and distribution.

Specific cable tray raceways and support racks are dedicated to provide physical routing but also protection, management, and support of many independent telescope utilities. Having these utilities organized in shared support structures allows for efficient operation and maintenance. 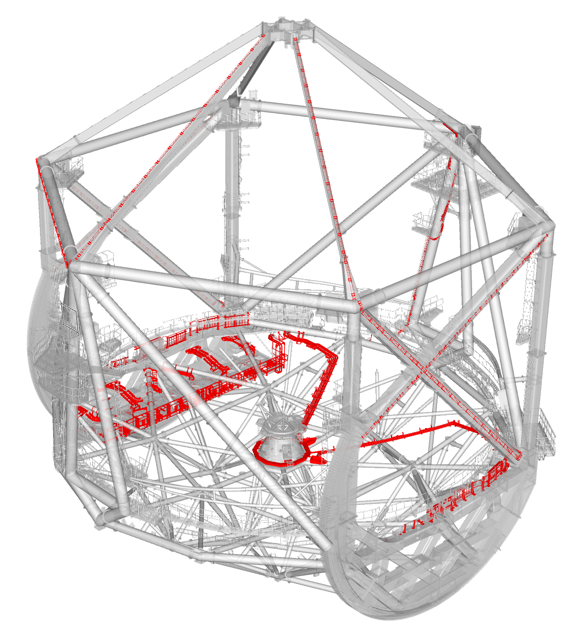 The TMT Telescope Structure shall be provided with an independent telescope lighting system dedicated to provide general ambient interior lighting to all major areas of the telescope structure and multiple telescope instruments. This normal lighting is needed to safely support all operational activities performed by TMT personnel and will illuminate the telescope floors, instrument platforms, telescope access paths, walkways and main work areas. 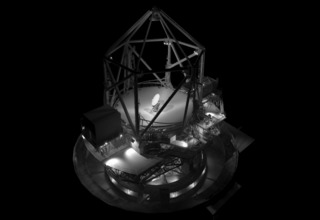 The final design work of the lighting system (normal and emergency) includes all lighting fixtures needed on the telescope. To ensure safe movement on the telescope structure, over 400 LED light fixtures (already placed in the CAD model and drawings), will be installed on telescope trusses for illuminating the working areas accessed by TMT personnel.

To prevent TMT’s image quality from being adversely affected by the heat generated by the many instruments and drive motors, various coolants (chilled water, refrigerant and cryogenic cooling) will be delivered to all equipment. A variable temperature chilled water (VTCW) system and laser cooling piping on the telescope will provide cooling water to the Laser Guide Star Facility (LGSF) system. VTCW is also provided to the STR subsystem for cooling its multiple direct drive assemblies. The Final design of VTCW, including the piping material, its size, routing and the insulation thickness, were also reviewed during the meeting, taking into account the need to minimize all vibrations that could be induced by the flow of coolants.

TMT will have a central air compressor system supplying clean dry and compressed air to various locations of the observatory, including the primary mirror cell structure. A system of compressed air will be used to purge the electronic systems by delivering air at a pressure of 6 bar, or higher, to each telescope instrument or subsystem. The TMT team determined the routing of the compressed air pipes and connections to serve all telescope-mounted subsystems, including all sensors, shut-off valves, check valves, and filters.

A global view of the telescope piping routing installation was laid out.

In support of personnel life safety and protection of the telescope facility, the TMT STR will be equipped with a fire alarm subsystem dedicated to provide electronic monitoring and alarm coverage of all accessible areas on the telescope structure.

All design aspects of the fire alarm equipment (e.g., pull stations, heat & smoke detectors, audio horns) have been assessed, including routing, mounting locations, and interfaces with the entire fire alarm system at the summit. The goal of the TMT main fire alarm system is to achieve personnel life safety through early fire detection, warning and evacuation alarms.

Manual pull stations of the STR fire alarm system are currently located throughout the structure and at all main walkways and stairways. Automatic heat and smoke detection devices are also required to provide early warning fire detection and alarm coverage of multiple telescope instrument systems. Audio horns will be located on the Nasmyth platforms and elevation structures. While not part of the fire alarm system, emergency stops, or E-stops, push button devices will also be located throughout the telescope platforms and different structure levels to stop the motion of any system that could cause an unexpected hazardous situation.

TMT telescope azimuth and elevation journals float on a film of high-pressure oil to ensure smooth motion of the heavy telescope structure. A pump located in the mechanical room will provide this high-pressure oil. The oil will be piped through the tunnel up to the observing floor, then run through the azimuth wrap and finally be routed to all bearing journals. The temperature of the oil will be continuously adjusted throughout the night by the telescope control system.

The layout and specifications of the telescope Hydrostatic Bearing System (HBS) rigid piping design have been assessed in preparation for this review. Flow and thermal analyses showed that HBS oil piping requires sufficient insulation to control heat gain and condensation inside the telescope enclosure. The minimum pipe wall thicknesses needed for the high oil operating pressures have also been determined and were presented during the meeting.

This first-tier of the TUS final design review was focused on the telescope structure. The teams showed that the TUS development and operational risks are completely understood, and mitigations consistent with TMT safety, quality and reliability standards have been adopted or planned.

Similar work for the areas adjacent to the telescope has already been started by the TUS team. The TMT summit facility hosts all equipment and infrastructure needed to support TMT on-site operations, including offices, workshops, optics facilities, lab space, computer room, but also all of the pumps, compressors, refrigeration systems, power, air conditioning and control systems. This work will continue in preparation for the remaining tiers of TUS final design, which will also cover the interfaces with the science instruments and other subsystems, such as alignment and phasing or the Adaptive Optics facility. Further work on vibration and seismic analysis, and detailed design will also be incorporated, reported and confirmed at a future close-out meeting.