Inauguration of India-TMT Optics Fabrication Facility (ITOFF) at CREST Campus near Bengaluru in India - The Vice President of India with distinguished Professors of the Indian Institute of Astrophysics and India-TMT members participated in the opening ceremony and were guided in viewing the new building on 29 December 2020. Image credit: Indian Institute of Astrophysics / India-TMT

Bengaluru, India - The newly built India-TMT Optics Fabrication Facility (ITOFF) was recently inaugurated by Vice President of India Shri. Venkaiah Naidu at the Center for Research and Education in Science & Technology (CREST) of the Indian Institute of Astrophysics in Bengaluru. 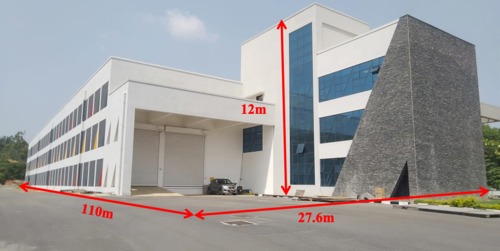 Professors Annapurni Subramanian, Director of the India Institute of Astrophysics (IIA); G. C. Anupama, Dean, IIA; Eswar Reddy, Programme Director of India-TMT; and Dipankar Banerjee, Director of ARIES joined Shri. Basavaraj Bommai, Minister for Home Affairs of the state of Karnataka, and other members of the Parliament for the opening ceremony on 29th December 2020.

Meanwhile Professor Ashutosh Sharma, Department of Science and Technology Secretary, and Professor A. C. Pandey, Chairman of IIA Governing Council, witnessed the event virtually via video conferencing along with several core members of India-TMT, IIA and the TMT community.

Following the ceremony, Vice President Naidu, accompanied by Bommai, were able to visit the campus and take a tour of the ITOFF facility. Dr. Reddy, also a TMT Board member, presented key features of the state-of-the-art facility. Dr. Reddy offered an update of TMT project and progress, and showed one of TMT’s mirror blank prototype.

In early 2020, 18 mirror blanks were received from OHARA/NAOJ Japan and are currently being stored at the new facility. They will soon undergo a mechanical grinding treatment and be accurately polished into a smooth aspherical shape (referred to as ‘roundel’).

Out of a total of 574 mirror segments composing the heart of TMT 30m telescope, 86 segments will be assembled at ITOFF. The facility should be ready to start operation within the next six months.

Furthermore, the Vice President was familiarized with another major project of IIA, the National Large Optical Telescope (NLOT) and its probable site location in Hanle, Ladakh, at 4500m above sea level.

It has been conveyed that the ITOFF facility and the innovative technologies developed for TMT could be utilized to build the primary mirror segments of NLOT and other future projects within India. 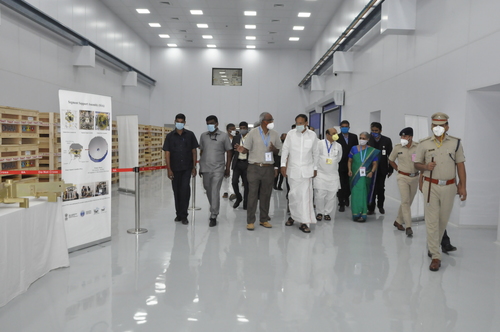 India TMT Optics Fabrication Facility (ITOFF) Visit and Inauguration on 29 Dec. 2020  -  Professor Eswar Reddy provided a tour of the new facility and presented an update of the project development to the Vice President of India and several members of Parliament.  Image credit: Indian Institute of Astrophysics / India-TMT