Pasadena, CA - The TMT Laser Guide Star Facility (LGSF) has successfully completed the first phase of its Preliminary Design Review (PDR1). The LGSF will be responsible for generating artificial laser guide stars that will be used with TMT’s Adaptive Optics (AO) systems, including NFIRAOS, the Observatory’s first-light AO facility.

Over the past several years, TMT engineers have refined top-level requirements and operational concepts. They have developed trade studies, and analysis and modeling activities that led to significant progress in designing and prototyping the LGSF overall architecture. This PDR1 focused on the optical, mechanical and electronic design of the Beam Transfer Optics (BTO) and Laser Launch Telescope (LLT) sub-system, which relays the laser beams from the laser platform to the telescope top-end and launches them onto the sky.

The LGSF will use multiple sodium lasers (wavelength of 589 nm) to generate laser guide stars for up to four different asterisms (geometric configurations). Each asterism will be projected into the sky from the laser launch telescope located behind the TMT secondary mirror. By exciting mesospheric sodium atoms at ~90 km of altitude, the lasers will create artificial stars with the required brightness for providing AO correction to almost any science targets throughout the sky. 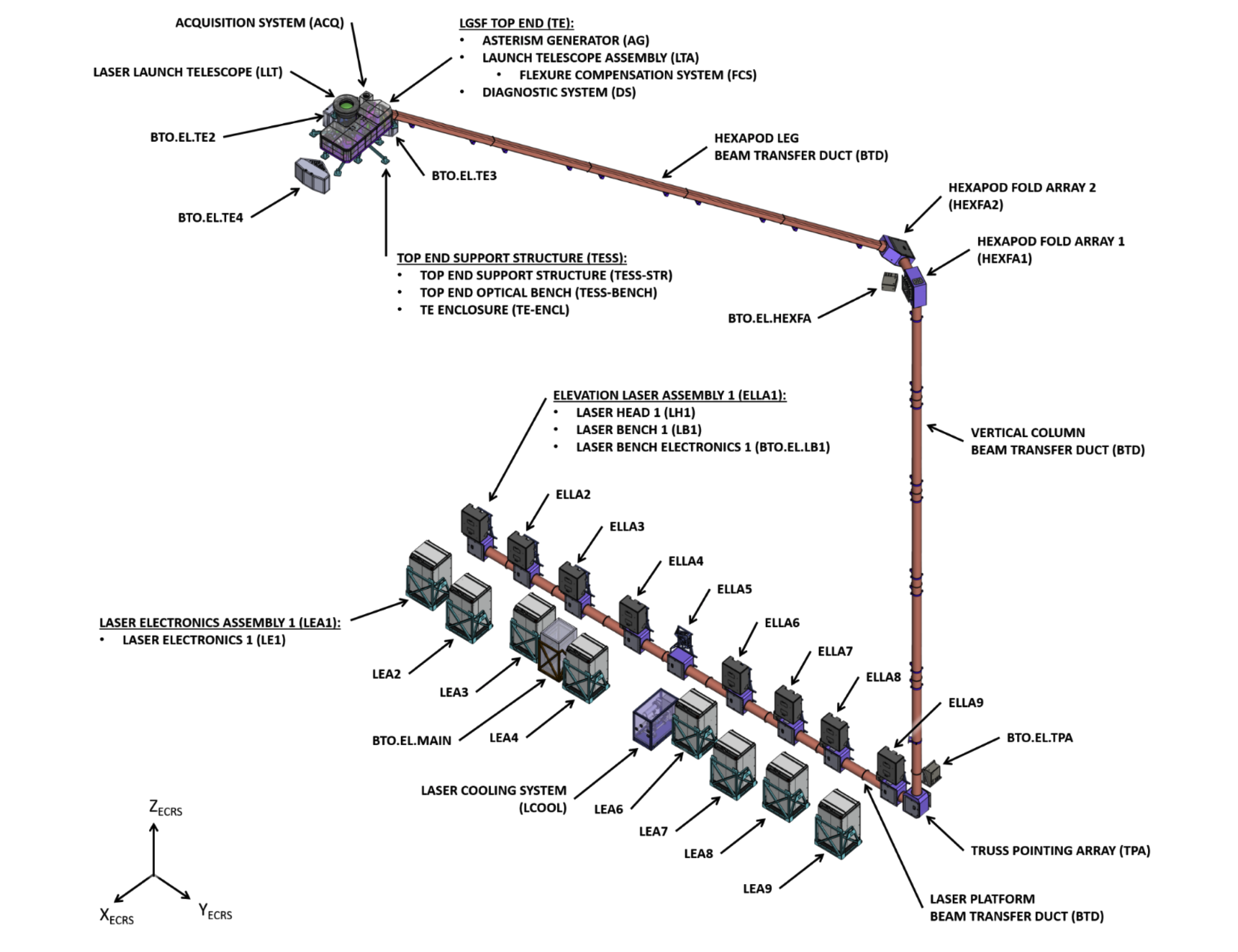 TMT Laser Guide Star Facility (LGSF) mechanical layout  -  The Laser Units (each consisting of a Laser Head and Laser Electronics) are installed on the laser platform. A long beam transfer optics enables the laser beams to be relayed to the LGSF Top-End, where they will be formatted and then launched from the laser launch telescope  -  Image credit: TMT International Observatory

The design of TMT’s LGSF physical architecture has been driven by two early decisions: (1) a center launch design that minimizes the laser guide star elongation and simplifies the laser guide star wavefront sensing system and (2) conventional optics (as opposed to fibers), which are used for transporting, expanding and launching the laser light.

The LGSF design is composed of three main sub-systems:

- The Beam Transfer Optics and Laser Launch Telescope system, which transport the laser beams from the telescope elevation journal, along the telescope structure, up to the telescope top-end, then format the beams into the required constellation and project the laser beams to the sky. The BTO is composed of the optics for conditioning and guiding the laser light, the control electronics and software, and other sub-systems such as the diagnostic sensors.

- The Laser Safety System, which includes the laser interlock sub-system dedicated to the protection of the Observatory staff and hardware, aircrafts, satellites and neighboring telescopes. The aircraft detection system will detect aircrafts approaching the laser beams and will automatically shut down all lasers for safety upon detection.

TMT will have up to eight lasers installed on the laser platform (six at first-light). Each laser can generate about 20W of power. The laser beams are folded into a compact 3x3 beam array (without the center beam) at the output of the laser platform and transported up to the telescope top-end with this format. Once the beams reach the telescope top-end, they are directed to the asterism generator, which transforms the 3x3 beam array into the required asterism. The asterism is then expanded and launched to the sky through a collimator and a launch telescope. The LGSF Top-End also includes a beam diagnostic system that will measure the centering, pointing, wavefront error and polarization of the laser beams.

TMT’s LGSF will use a combination of individual and common mirrors per beam (8 individual mirrors and 8 common mirrors) that will need to be precisely positioned and aligned along the optical path to produce the proper asterism on-sky. The LGSF will create bright artificial stars within the line of sight of the science object being observed. These laser guide stars are required by the TMT’s Adaptive Optics (AO) wavefront sensors to accurately characterize and analyze the atmospheric turbulence. NFIRAOS (the first light TMT Laser Guide Star Multi Conjugate Adaptive Optics) will use six Laser Guide Star Wavefront sensors, several natural guide star wavefront sensors, and two deformable mirrors to correct in real time the image distortions and flatten the wavefront of the light from the science target. 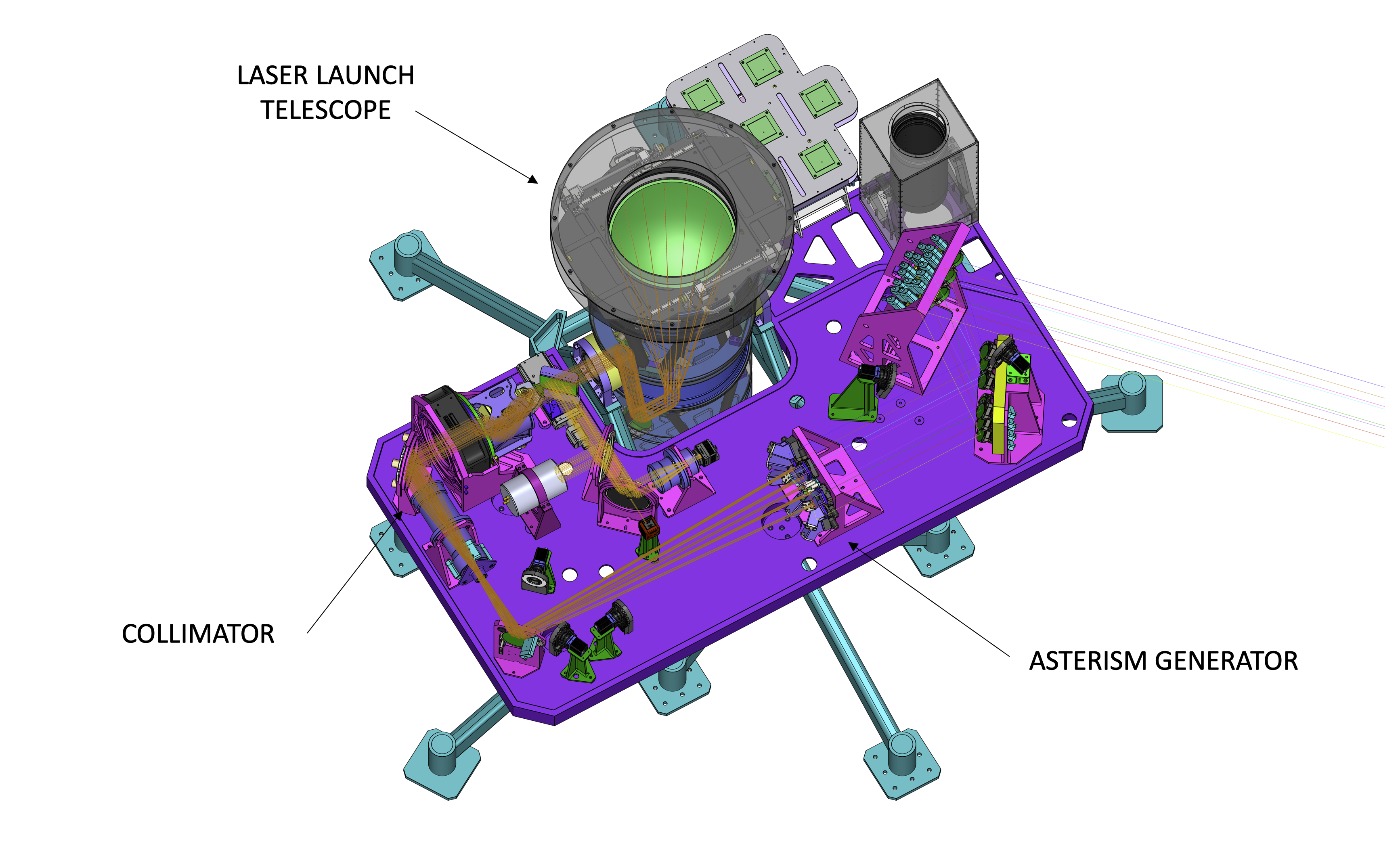 The Earth’s atmosphere is the largest barrier between ground-based telescopes and the stars. It generates turbulences that blur the light and gives stars their twinkling appearance. The turbulences limit the quality of astronomical observations by causing image aberrations. The combination of TMT’s NFIRAOS system with the LGSF will allow IRIS and MODHIS (TMT’s first-light AO instruments) to acquire, almost anywhere in the sky, images of astronomical objects with the optimal sharpness of a thirty-meter telescope.

“Congratulations to the LGSF Team for a successfully passed PDR1,” said Corinne Boyer, TMT LGSF design team manager and Adaptive Optics Group Leader. “The conceptual design update review was conducted about 10 years ago in Beijing and passing this PDR1 is a great milestone for the TMT LGSF design team. We are thankful to the LGSF technical teams from the project office, and to our colleagues from the Institute of Optics and Electronics in Chengdu, China, for their dedication and commitment, and the outstanding work they have produced.”

The TMT LGSF team is now working towards the next milestone to complete the LGSF preliminary design, which is currently scheduled for late 2022. The focus will be on activities related to Laser Cooling, LGSF software and safety systems. All necessary handling equipment for installation, maintenance and operational access of the LGSF will also be examined at that time. 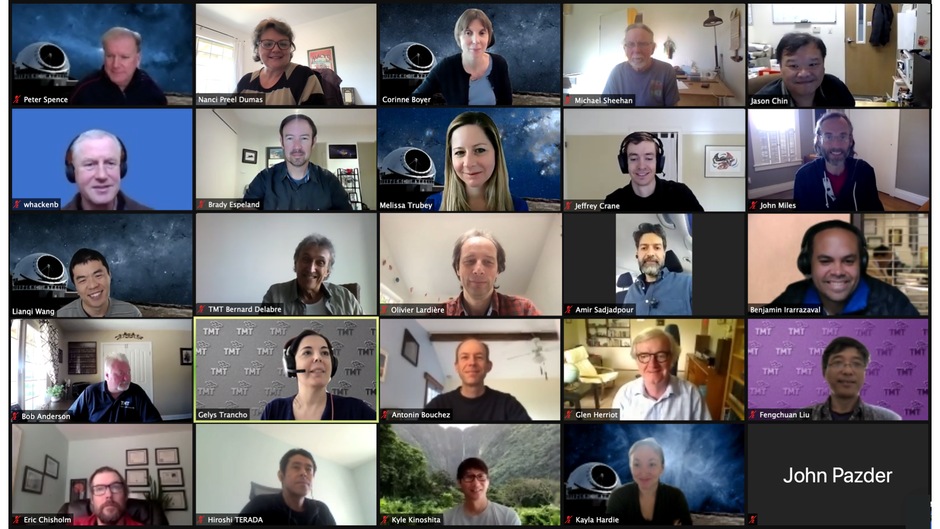 Update on TMT Primary Mirror Production in the Bay Area