Cross section view of TMT Wide Field Optical Spectrometer (WFOS) - February 2022 - Rendering of WFOS standing on one of the TMT lateral Nasmyth platforms. Light from the TMT Tertiary Mirror (M3) comes from the left into the WFOS Atmospheric Dispersion Corrector, which serves as the entrance window for the instrument - Image credit: TMT International Observatory

WFOS is the largest UV/visible monolithic optical imaging spectrograph ever for construction in the field of astronomy. WFOS will provide near-UV, visible and near-IR multi-object and single-slit spectroscopic capabilities and will be the seeing-limited instrument available during the first years of TMT. 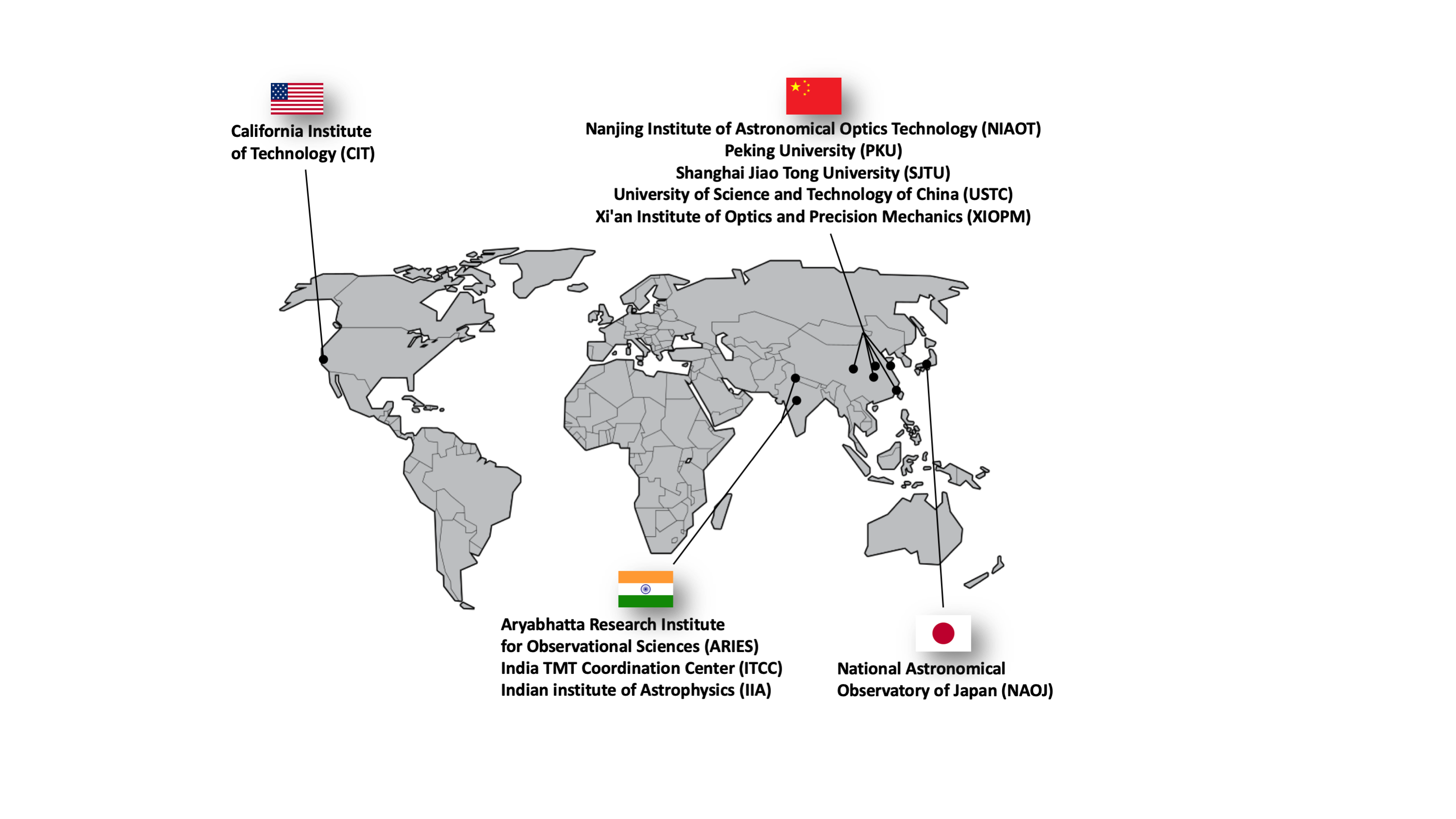 The breadth and depth of the WFOS science cases, its high throughput across the entire optical spectrum (0.31 – 1.0µm), and the wide range of available spectral resolutions and grating configurations will make WFOS a highly compelling workhorse instrument for TMT.

Among the main science programs to be carried out with WFOS are the study of the formation and evolution of galaxies, the origin and properties of stellar populations in nearby galaxies, and the nature of transient astrophysical phenomena. WFOS will also help answer some important questions about the of the intergalactic medium, the properties of high-redshift galaxies, the nature of dark energy, and the study of exoplanet atmospheres.

Thanks to its very high throughput and wide spectral coverage, WFOS will make previously inaccessible phenomena and objects available for highly sensitive spectroscopic studies, opening new windows of investigations and boosting the study of the faint universe at higher spatial, spectral and temporal resolution.

WFOS requirements were found to be well-defined, comprehensive and unambiguous, leading to a straightforward and powerful design that will not call for extensive technology development. The reviewers praised the impressive amount of mechanical design, which is welldeveloped for a conceptual design, for balancing functionality and complexity to meet key performance requirements.

the flow-down from science requirements to instrument architecture was exceptional, giving the WFOS team confidence that the right direction has been found for the instrument design. 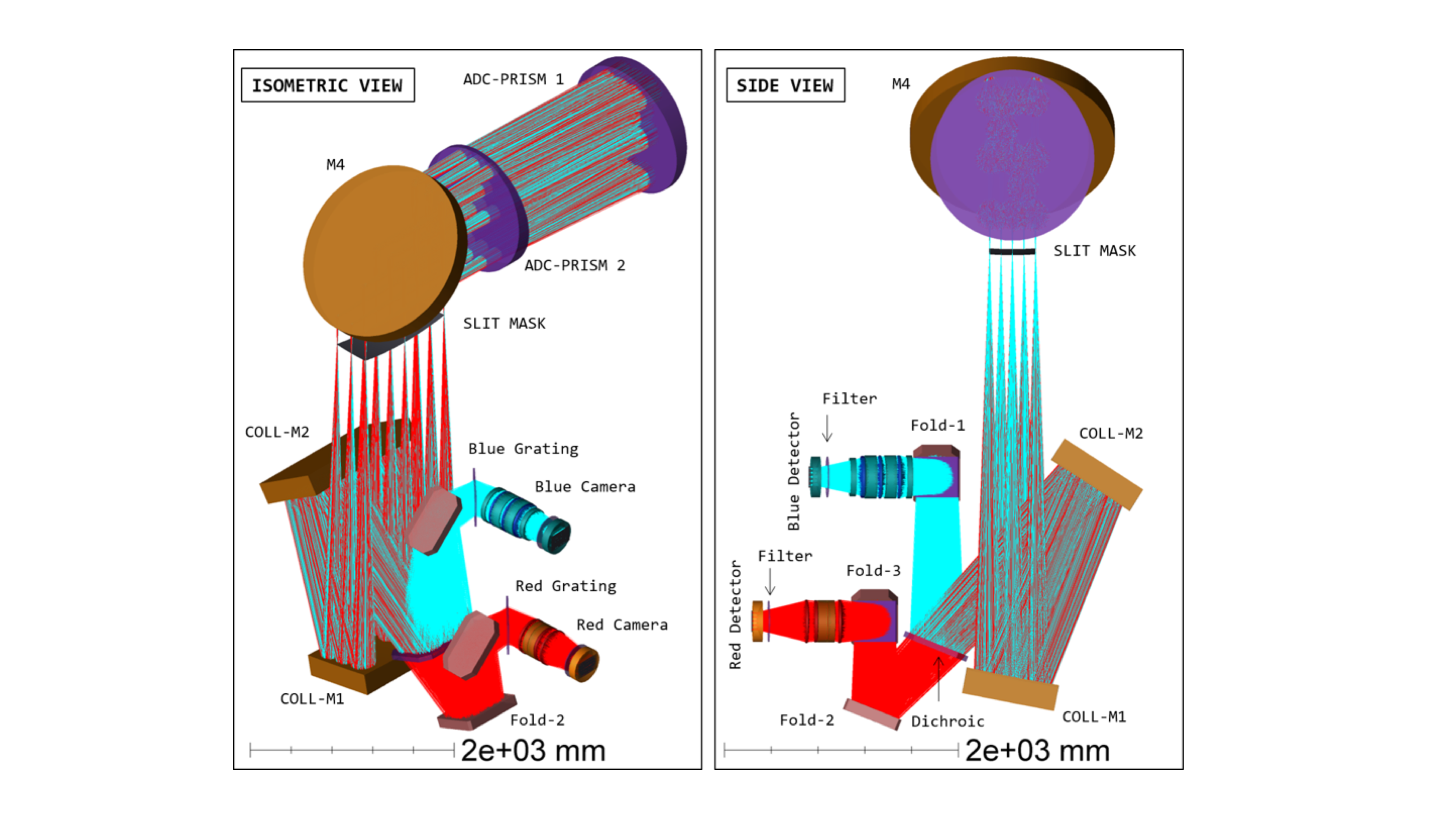 WFOS Instrument Optical Path Layout and Mechanical Design - WFOS has a two-channel spectrometer design and will be the largest and most sensitive multi-slit spectrograph ever built. The optical layout starts from the linear Atmospheric Dispersion Corrector (ADC) mounted to the static structure and ends at the detector array - Image credit: TMT International Observatory.

WFOS is a large 8.3m-tall, 5.5m-wide, and 7.5m-long instrument, with a gravity invariant vertical rotation axis. It is composed of 16 main subassemblies, including about 50 motors, and almost all structures, mechanisms and mounts are made of steel. The instrument weighs 42 tons and will operate at ambient temperature. 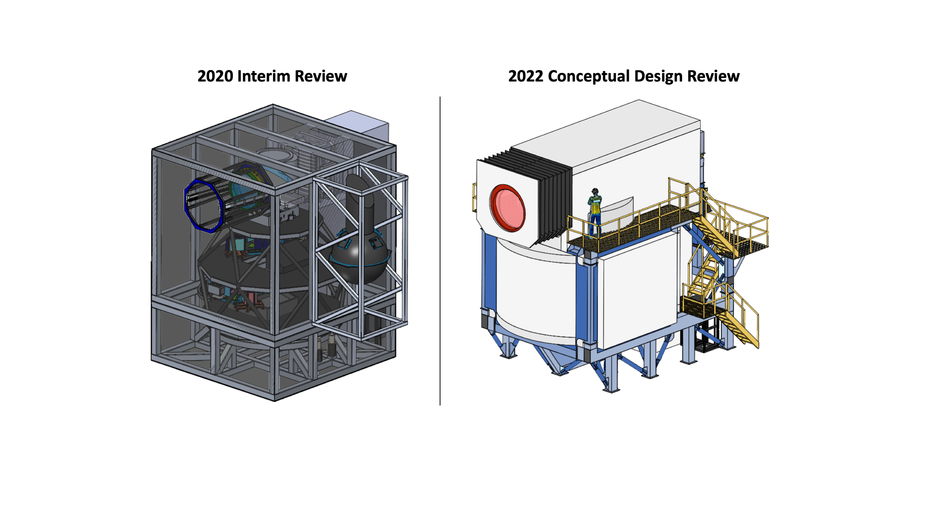 - The Static Structure (SSTR) and Rotating Structure (RSTR) that comprise the structure of the instrument;

- The Collimator (COL), including a dichroic and static folds that split the beam in a Blue and a Red Channel (BCHAN and RCHAN) and present a clear pupil at the dispersers in the spectrograph channels;

- Transmission gratings, a camera barrel, and CCD detector cryostat, as well as mechanisms for the exchange of gratings and filters and the rotation of the cameras within each spectrograph channel; and

-  A dedicated Calibration System (CAL) that provide additional functionality to the core spectrometer. 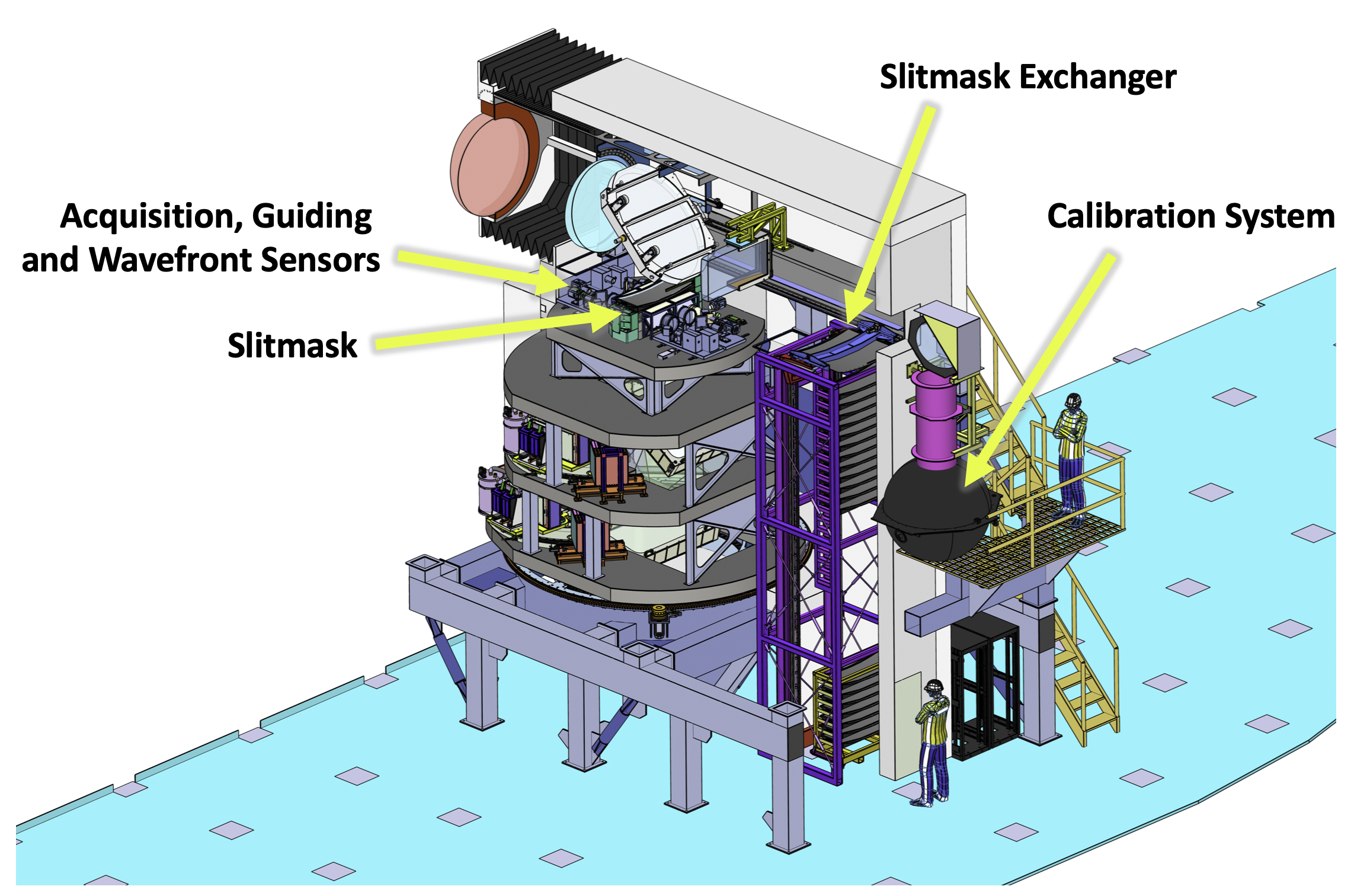 Section view of the WFOS from the Backside of the Instrument - The image shows details of the structure (design by Caltech, US and analyzed by SJTU, China), the Acquisition, Guiding, and Wavefront Sensor (USTC, China), the slitmask exchanger (NAOJ, Japan) and calibration system (ITCC, India) - Image credit: TMT International Observatory

- A simpler, new slitmask exchange system design that optimizes mask replacement time, and a first concept for the mask fabrication facility and its concept of operation;

- A concept of the blue and red cameras and detector cryostat, as well as the detailing of the design of all the spectrograph mechanisms; and

- A simpler optical design of the calibration system, now located to the rear of the instrument. 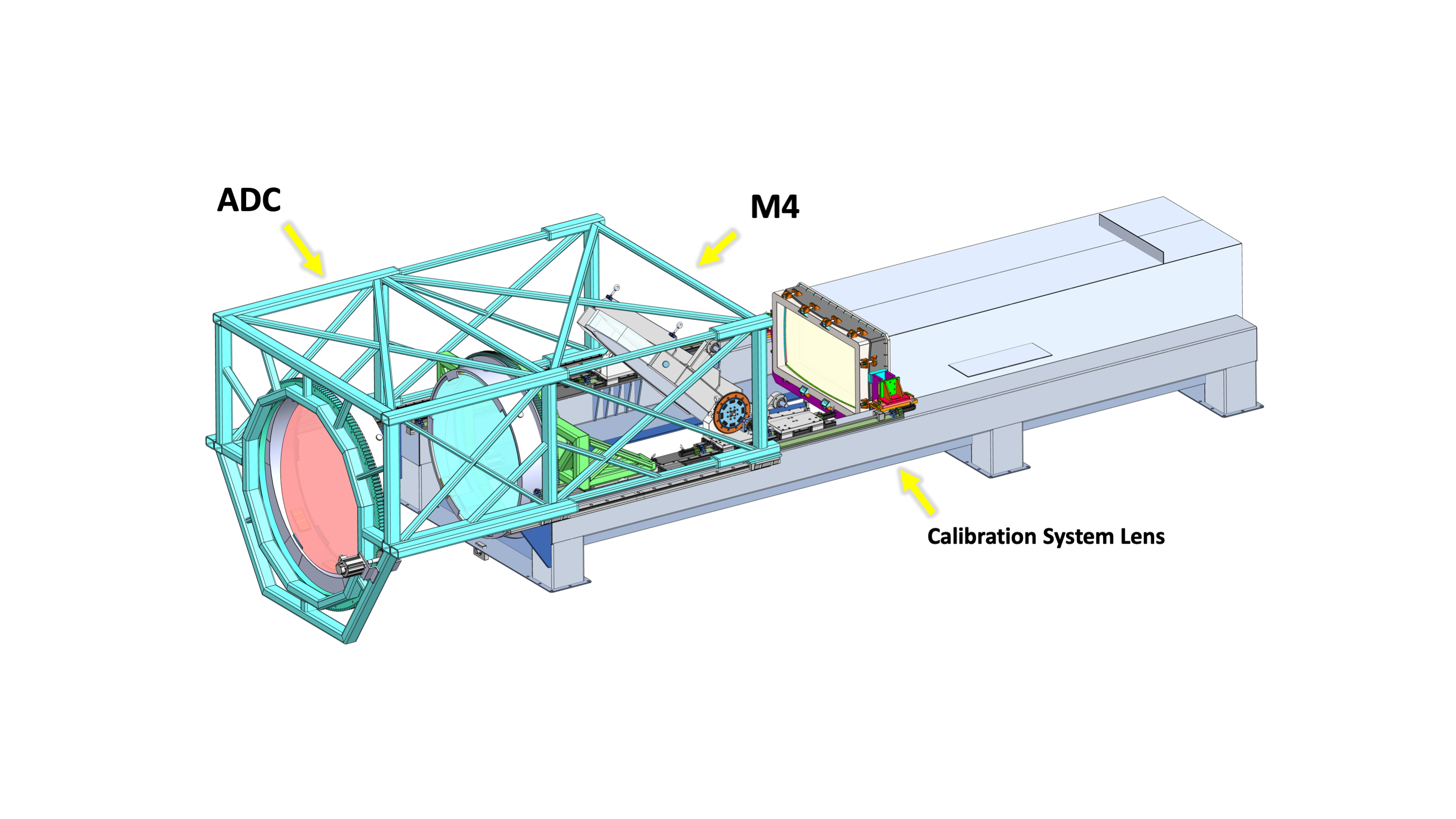 Preliminary CAD model of WFOS ADC (left) and M4 (right) Mechanism - The two ADC prisms are mounted into steel cells able to independently translate and move along ring bearings driven by motors (XIOPM, China). The M4 mirror can be tip/tilted for pupil centering and flipped to direct the calibration system light into the spectrograph for daytime calibration (Caltech, US) - Image credit: TMT International Observatory 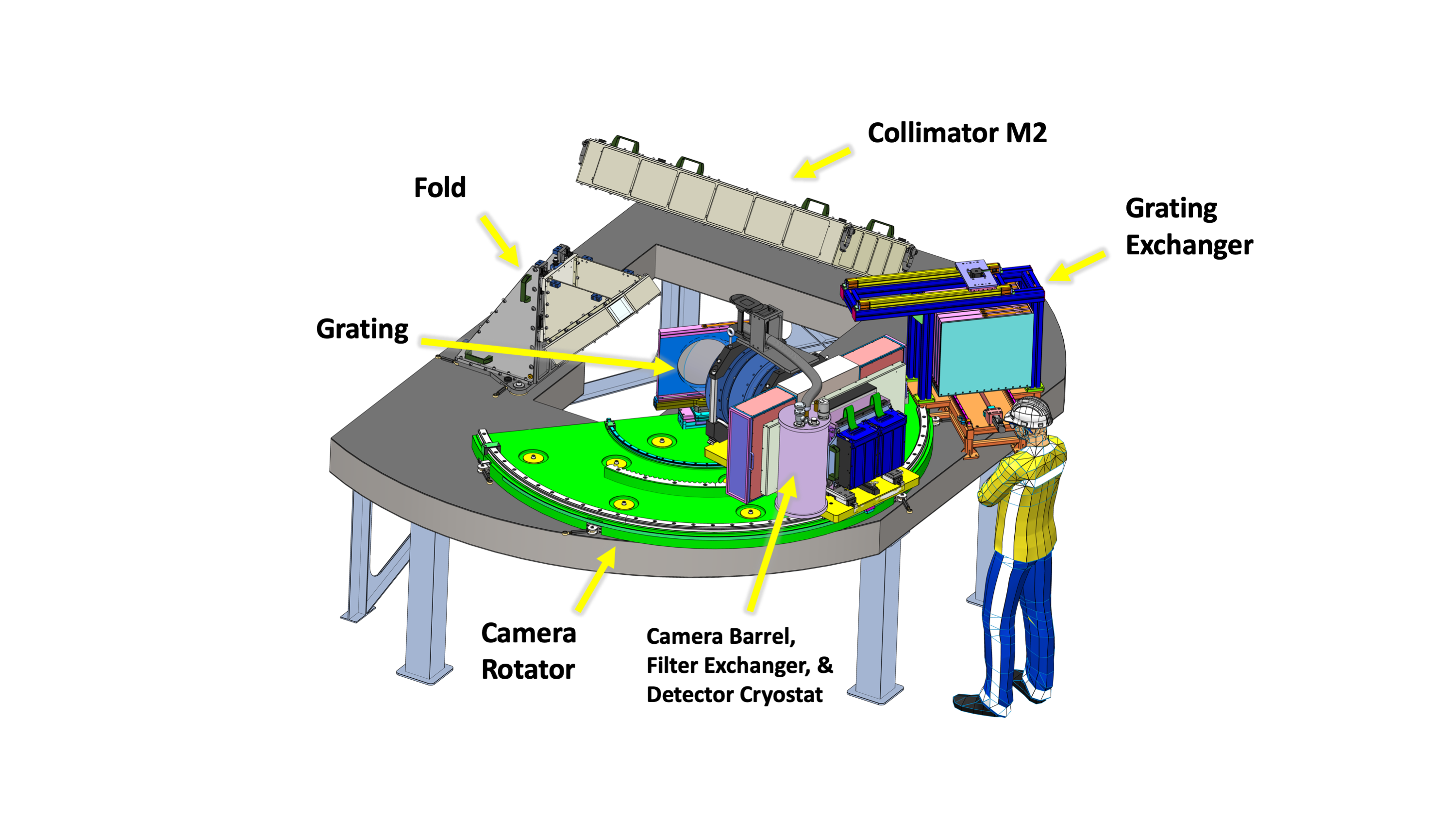 Preliminary CAD model of WFOS Blue Channel - The blue and the red spectrograph channel subsystems are mounted on an optical bench, which also supports the collimator, dichroic, and fold mirrors. The image shows the grating exchanger (ITCC, India) and the blue camera barrel (Caltech, US), filter exchanger (ITCC, India), and blue science detector cryostat (Caltech, US) on the camera rotator plate (ITCC, India). Nearly identical designs are implemented for the mechanisms of both spectrograph channel. The operation of all mechanisms is gravity-invariant - Image credit: TMT International Observatory.

The optical design includes an on-axis two-mirror collimator, and nearly identical blue and red For daytime calibration, the output of an integrating sphere can be directed into the instrument by tilting M4.

Direct imaging mode uses no slit mask or dispersing element and the instrument re-images the 8.3’ x 3.0’ FOV onto a detector array with a plate scale of 52 mas per pixel. Direct imaging can be used with broadband filters (> 1000 Å) or narrowband filters (< 100 Å).

Long-slit spectroscopy will be for single target while multi-slit spectroscopy can acquire up to ~60 targets in a single exposure assuming 8” long slit-lets and 0.3” gaps between slits in the spatial direction. The focal plane layout allows space for the guiding cameras, acquisition cameras, wavefront sensors, and someday, possibly, Laser Guide Star wave front sensors for Ground-Layer Adaptive Optics correction. The patrolling guide cameras are needed for target acquisition and guiding, but are also used for the fine alignment of multi-slit masks and single slit targets.

The review also featured the conceptual design of WFOS software, which. The WFOS instrument control software complies with the overall TMT software architecture, and the team received constructive feedback from the reviewers to improve the definition of the interfaces between the WFOS software and other telescope subsystems. 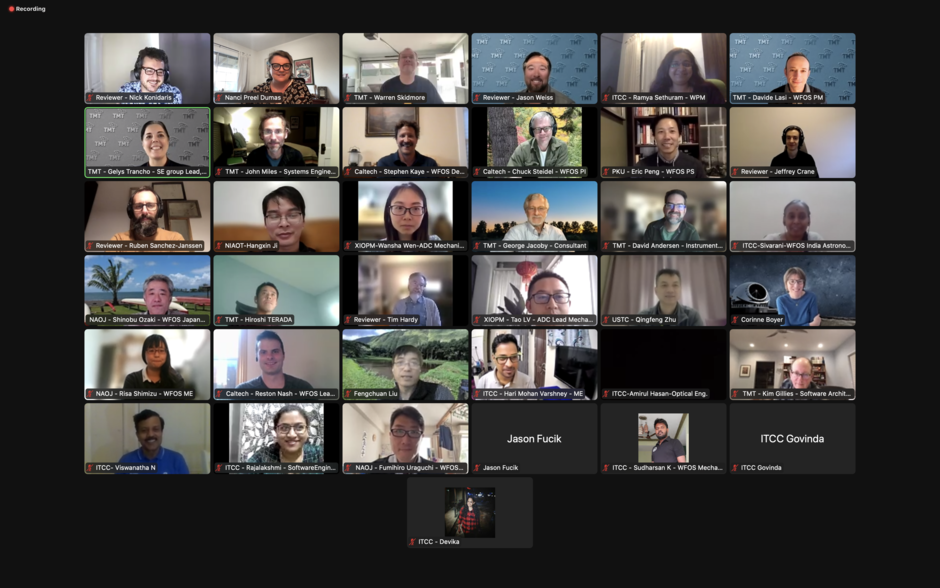 Screenshot of the participants in the TMT WFOS Instrument Conceptual Design Review – held via video conference on 8-9 Feb, 2022 - Over 40 engineers and scientists from China, Europe, India, Japan and USA are involved in designing the instrument and attended the review - Image credit: TMT International Observatory.

The review board congratulated and acknowledged the WFOS team on the quality of the presentations and documentation delivered, recognizing the excellent work undertaken by the instrument team to complete the conceptual design phase: “The documentation and review material were of the highest quality. WFOS team has done an outstanding work and showed us they are working very well together to pass the Conceptual design milestone. The effort deployed on this design was found very inspiring and the whole team deserves a big round of applause!”

“We are thankful to the reviewers’ engagement and effort to support TMT. Their recommendations will definitely make WFOS a more successful instrument,” said Davide Lasi, WFOS Instrument Project Manager.

“This is a major achievement for TIO’s instruments,” said Dave Andersen who recently took the position of TMT Science Instruments Group Leader. “It has been a great pleasure to begin my work with TMT by sitting in this review and hearing all the fantastic work done by the teams.”

TMT Participates in Journey Through the Universe 2022 on Hawaiʻi Island