Pasadena, CA – The Thirty Meter Telescope recently reached another critical development milestone with the successful Conceptual Design Review close-out meeting of the Cryogenic Cooling System (CRYO). The online review, held on May 19, 2020, focused on the completion of the recommendations that arose from the CRYO Conceptual Design Review[i] held in August 2018.

The committee was delighted with the work presented at the review, and announced that CRYO was ready to proceed to the next phase of the project. The developed technology and overall system design have demonstrated significant accomplishment, meaning that the CRYO system is fairly mature to advance directly to a combined phase of Preliminary & Final Design. “The success of this effort really illuminates how well a distributed process can work together at TMT, with contributions from China, Canada and the Project Office in Pasadena, to produce a comprehensive result in the end,” said Brent Ellerbroek, TMT CRYO Work Package Manager.

Two of the TMT first-light science instruments, the InfraRed Imaging Spectrograph (IRIS), and the Multi-Object Diffraction-limited High-Resolution Infrared Spectrograph (MODHIS), are designed for observations in the near-infrared (at wavelengths in the [1-2.5] µm range) and require operational temperature down to 77 K, which corresponds to the boiling point of LN2, at the phase change from liquid to gas.

The sensitivity of TMT’s near-infrared instruments is strongly affected by ambient heat, which generates strong thermal background noise at these wavelengths. As such, it is necessary to keep critical optical elements within large vacuum chambers, or cryostats, and the CRYO system maintain all temperature sensitive elements at low temperature to reduce their infrared thermal signature. IRIS and MODHIS will have the ability to detect the near-infrared light of faint astronomical sources through the warm Earth atmosphere.  TMT’s other first-light instrument, Wide Field Optical Spectrograph (WFOS), will operate at visible wavelengths but will still require its detectors to be cooled by CRYO. The figure below shows the interface between CRYO and first-light TMT subsystems. 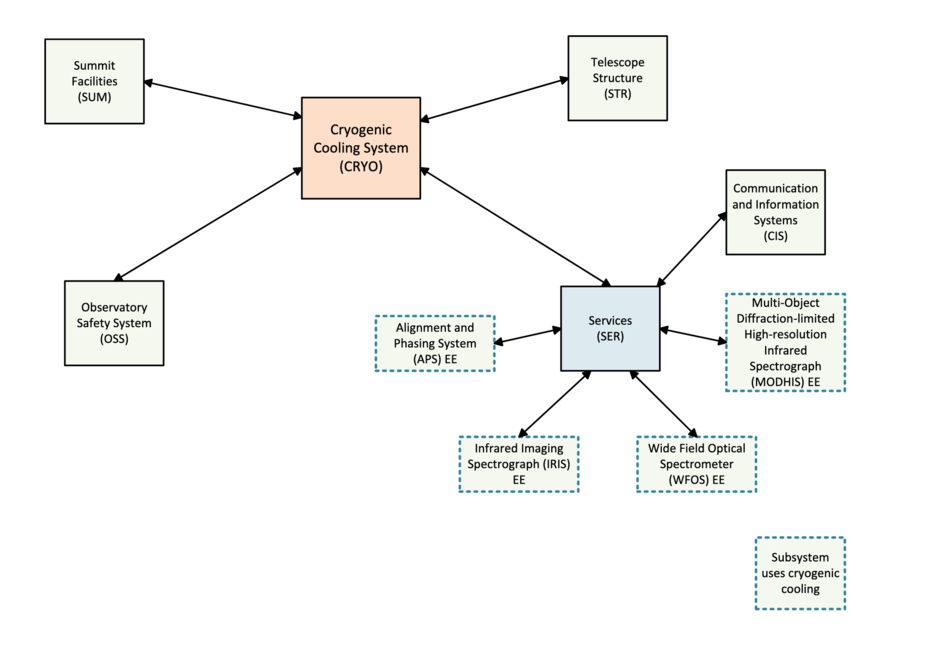 The CRYO system will use its own LN2 plant, including an air separation facility and nitrogen liquefiers located within the summit facilities building, that is adjacent to the telescope enclosure[i]. This building will house the equipment necessary to provide electrical power, chilled water for equipment cooling, daytime air conditioning, compressed air and other services necessary for TMT operations.

The facility also provides space for large industrial equipment required by various TMT subsystems that cannot be located on the telescope due to excessive mass, vibration or heat dissipation. This equipment is mostly located in a space called the utility room, where LN2 will be generated, then stored in the co-located storage reservoir, and finally piped via the telescope azimuth cable wrap to tanks, or Dewars, mounted on each Nasmyth platforms. These Dewars will be used daily to refill smaller Dewars of LN2 for each instrument that require cryogenic operating temperatures.

All routine daily CRYO operations will be automated as much as possible. The CRYO system will provide controls to validate the readiness of each instrument to accept an LN2 transfer, then initiate and manage the transfer of cryogenic liquid. 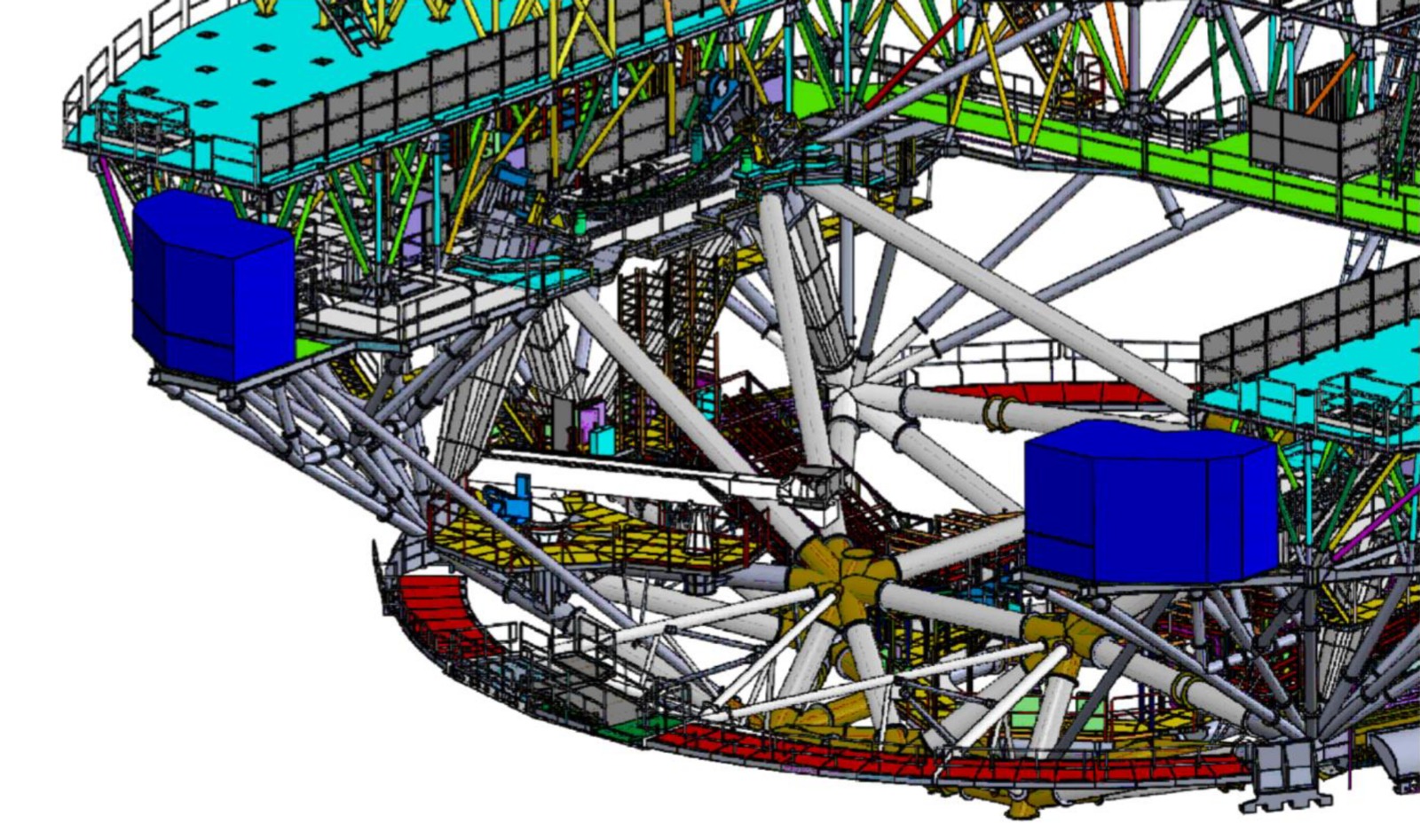 To prevent deterioration of TMT’s image quality due to telescope vibration induced by the transfer of cryogenic fluid to science instruments, the refilling of LN2 Dewars will take place during daytime. “This way, the CRYO system will not produce vibration during scientific observations, and the goal is to transfer LN2 for four hours every morning,” added Ellerbroek.

TMT’s Cryogenic Cooling System (CRYO) liquid Nitrogen (LN2) route along the Service Tunnel. The figure shows the LN2 route starting at Dewar A in the LN2 generation plant located at close proximity of the service tunnel, an underground structure designed to provide a passage for all services into the telescope  -  Image credit: TMT International Observatory

Participants of the conceptual design review evaluated the environmental and technical performances of the CRYO system, as well as its functional and operational requirements. The documents presented to reviewers provided much detailed layouts of the equipment needed in the summit utility building, and the piping/routing of the cooling from the utility room to the telescope.  All of the components necessary to generate, store, and transport LN2 to the TMT science instruments have been analyzed. The CRYO system is now robust and practical with a clear notion of the exact quantity of cooling that will be needed. TMT will produce about 480 liters of LN2 a day for cooling the first-light instruments. In addition, the safety aspects have been well developed. The constraints for producing and storing large amounts of LN2 are well understood to avoid leaks, or mitigate their impacts, without creating a safety issue for humans.

The work was supported by the development of a prototype, built by the IRIS science instrument team, who constructed a half scale of the Dewar that will be used to store LN2 for IRIS cooling. The report of these activities, including thermal analysis and tests of the IRIS Dewar prototype, and its liquid nitrogen auto-fill subsystem, gave exciting results just a few months before the CRYO review. Future prototyping work will focus on the accelerated lifetime testing of the flexible vacuum insulated pipe lines in which the cryogenic liquid is transferred via the telescope cable wrap. It is expected that the average lifetime of the cable lines will be around 10 years. The CRYO system design also includes a spare line that will be used automatically as a back-up in case a leak is detected.

Some second-generation science instruments will include mid-infrared detectors (even more sensitive to thermal background than IRIS or MODHIS), which will require compressed Helium as a cryogenic refrigerant. The CRYO architecture upgrade, its design concepts, and associated requirements for cooling TMT second generation instruments via compressed Helium, are already under development.

“The design of TMT’s CRYO system is well beyond a conceptual stage and the quality of the review is an example of the high standards set within the TMT Project”, said Gelys Trancho, TMT System Engineering Group Leader, during the review committee report.