Rendering TMT baseline design for the Telescope Structure Subsystem (STR) - TMT STR serves as the skeleton and muscles of the telescope and thus interfaces with various instrumentation, optics, and controls subsystems. TMT STR will hold the TMT's optics and smoothly tracks celestial targets as they move across the sky. For perspective, the telescope is ~55m (180 feet) wide and ~50m (160 feet) tall - Image credit: National Astronomical Observatory of Japan (NAOJ)

PASADENA, CA - A virtual meeting was conducted on April 5, 2021 between representatives of the National Astronomical Observatory of Japan (NAOJ, TMT Japanese Partner Institution) and the TMT Project Office (TMTPO) Telescope Structure Subsystem (STR), Systems Engineering (SE) and Project Management (PM) teams. The goal of this closeout meeting was to verify closure of all major actions from the STR Production Readiness Review (PRR) 1 which was conducted successfully in March, 2020. PRR1 is the first of six PRRs for the TMT STR. The production readiness reviews are major decision points which allow fabrication to start for subassemblies of the massive telescope structure system.

Several key design updates were verified as complete and the PRR1 received full approval from the members of the multinational review panel to proceed to the fabrication phase for three subassemblies of the altitude over azimuth (alt-az) mount of the STR (see figure 1), which are the: 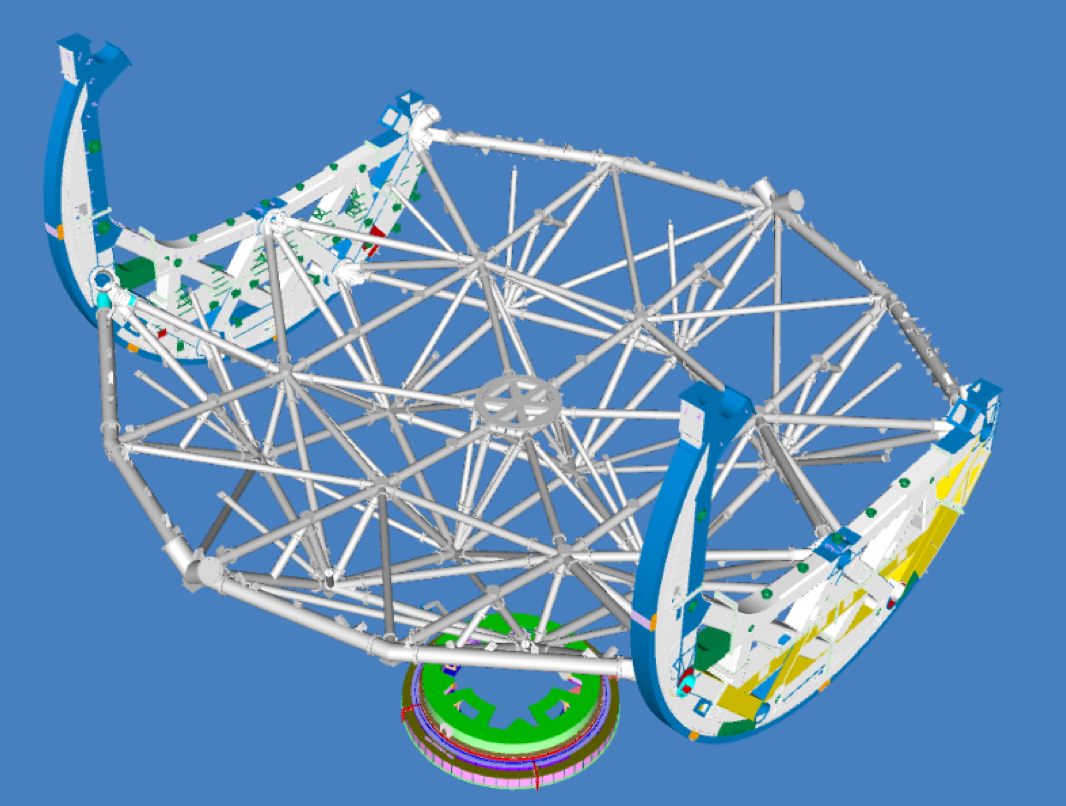 “Having successfully passed the first production readiness review (PRR1) is truly impressive for the team, said Professor Masao Saito, Leader of the NAOJ Telescope Structure Team. “We have reached a long-awaited and significant milestone, which has granted us authorization to move forward from the completion of the detailed design phase to material procurement and fabrication. Of course, this is just the first step, and we have several other production readiness reviews to go through, but this accomplishment further motivates all the team members to get ready for the upcoming production phase. I am grateful to Mitsubishi Electric Corporation (MELCO) team, TIO and NAOJ for their strong commitment.” 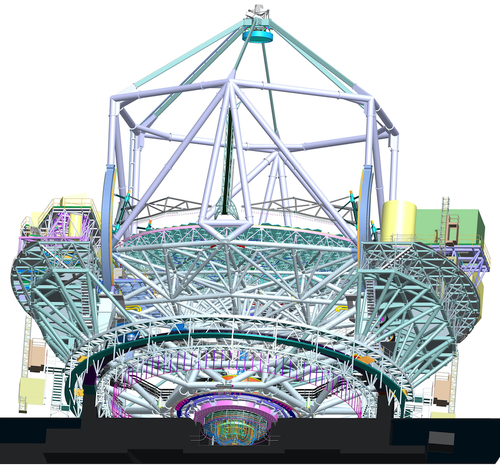 “Sincerest appreciation to the STR Design (TMTJ, MELCO and TIO) and TIO System Engineering teams for the excellent teamwork and hard work to address and settle remaining actions of the STR PRR1 Review from March 2020,” said Kyle Kinoshita, TMT’s Telescope Structures Group Leader. “Congratulations on a job well done! It is incredible that we will start building the massive mount for all TMT Optics and Instrumentation soon. It will be one of the largest telescope structures ever built for an optical/infrared telescope. It is a huge step in the construction of TMT.”

TMT STR comprises the framework of the telescope, and weighs over 3000 metric tons. It is an altitude-azimuth design with a single azimuth track and two large elevation journals. The Structure consists of three major subassemblies: 1) stationary structures attached to the pier and observatory floor; 2) the azimuth structure, including two large Nasmyth platforms to support the instruments; and 3) the elevation structure, which carries all the telescope optics.

STR includes the overall steel structure and related mechanical components such as hydrostatic bearings and drives that form the backbone for the optical elements, astronomical instruments and adaptive optics systems.

Specifically, the subsystems mounted on the STR include the primary mirror (M1), secondary mirror (M2) and tertiary mirror (M3) control systems; the Laser Guide Star Facility; the science instruments and adaptive optics systems, mounted on either Nasmyth platform (i.e. NFIRAOS, WFOS, IRIS, MODHIS etc.), and the auxiliary systems such as the Alignment and Phasing System that is responsible for the optical alignment of the primary, secondary and tertiary mirrors of TMT.

STR also includes several electro-mechanical subsystems including a segment handling system for exchanging segments after recoating, and an aerial service platform for servicing the M2 and M3 systems with the telescope in the horizon-pointing orientation.

TMT STR is required to serve as a platform for safe access of the telescope-mounted systems during technical maintenance procedures. Because TMT is a large structure, an elevator, lifts, stairs and walkways will be included to provide efficient and safe access to all subsystems on the telescope.

Functionally, all utility lines (power, coolant, cryogen, refrigerants, air, data and communication) will be routed and affixed to the telescope structure. Because the telescope rotates in two axes, azimuth horizontal rotation and elevation vertical rotation, two vibration-free cable wrapping systems have been developed by the STR.

STR will be equipped with a seismic isolation system to protect all the optics and instruments in case of large earthquakes. Additionally, temperature and wind speed sensors will be used to reduce the effect of turbulent air and temperature fluctuations within the telescope enclosure.

Subsequent production readiness reviews covering the majority of the remaining moving structural components of the TMT steel structure and Nasmyth platforms are planned for upcoming years.

MELCO, the STR Prime Contractor which is providing the leading engineering support for the design phase, will manufacture, assemble and test TMT's telescope structure before installing and verifying its performance at the TMT observatory site. 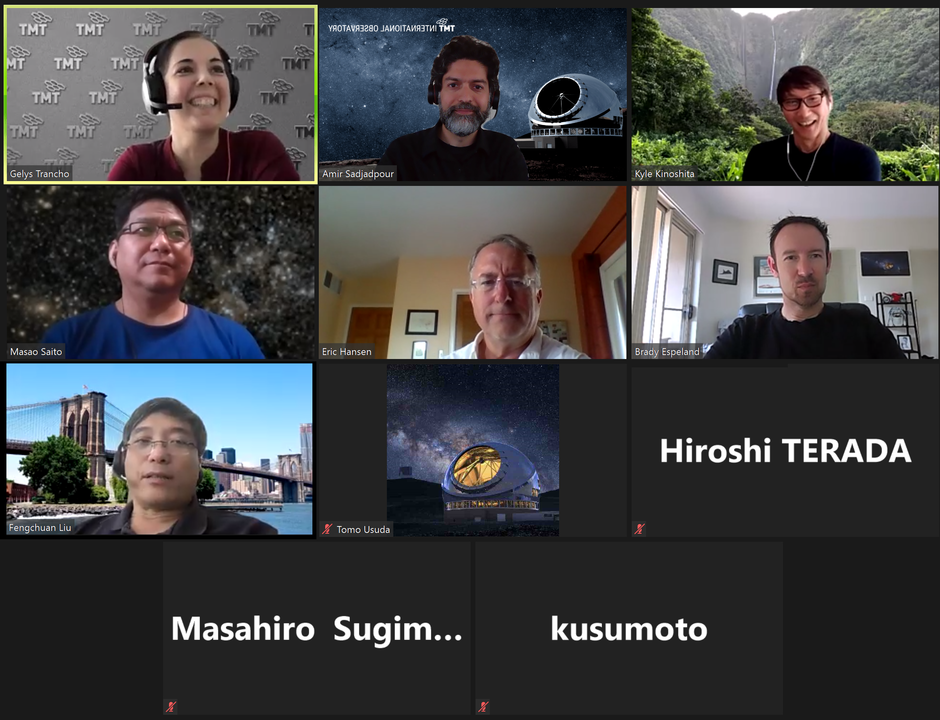 Progress made on TMT mirror production