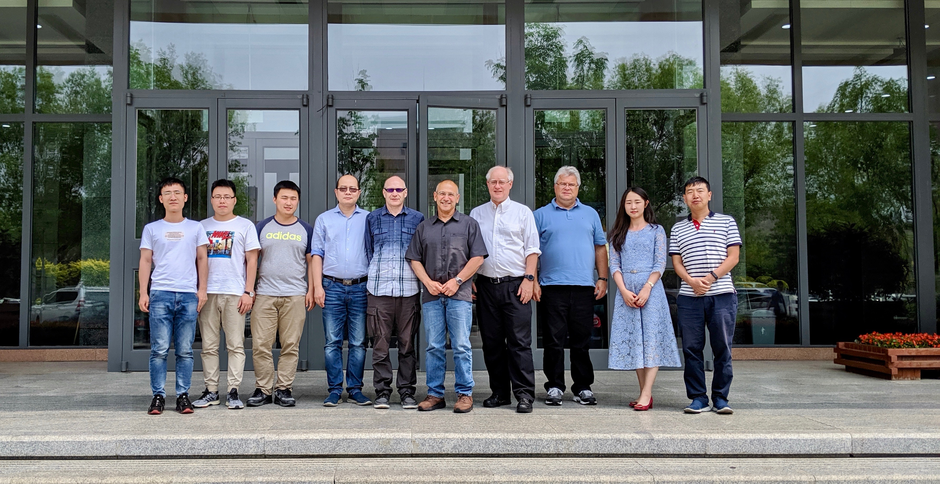 TMT’s M3S consists of a 3.5m by 2.5m (11 ½ x 8 feet) flat elliptical mirror made from Schott’s low-expansion ceramic material Zerodur© mounted on a passive support system. It is articulated around two axes using direct drive motors to point and keep the telescope’s light-beam onto the various instruments located on the Nasmyth platform, all with exceptional accuracy. The control of M3S must also allow a rapid and precise switch between instruments, keeping the science target aligned with the instrument optical axis as the telescope changes its elevation angle. 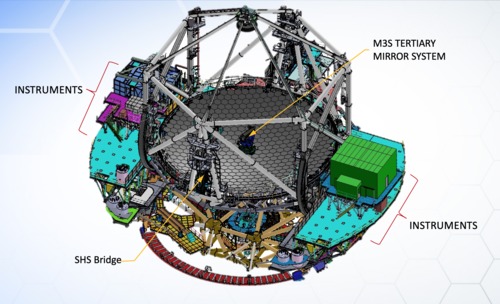 Located in the center of the primary mirror, M3 is used to fold and steer the light path coming down from the secondary mirror, so the science beam can be delivered to any of the instruments active on the telescope. - Image credit: TMT International Observatory 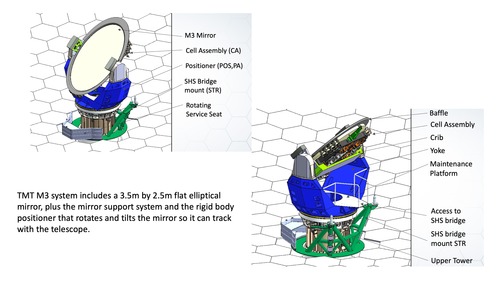 Perspectives of TMT M3 System (M3S) -  The M3 system includes the M3 Blank, the M3 Mirror (a 3.5m by 2.5m flat elliptical mirror), the upper portion of the tertiary mirror (M3) system Tower, the M3 Cell Assembly, the M3 Positioner Assembly, the interface hardware between the M3 System and the Telescope Assembly, and support for receiving, assembly, inspection and verification of the M3 System onto the TMT Telescope at the Observatory. TMT M3S will approximately weigh 12 tons  -  Image credit: TMT international Observatory

TMT’s review panel was charged with evaluating the M3S Preliminary Design against the functional, operational and interface requirements of the system. The panel found that the M3S requirements and enabling technologies have been adequately defined and developed to allow the M3S design to proceed to its Final Design phase.

“Engineers from CIOMP, selected in 2011 by the National Astronomical Observatories of the Chinese Academy of Sciences (NAOC) and the M3 design team at the Project Office, have received full approval to proceed to final design by the members of our multinational review panel,” said Tomas Chylek, TMT Senior Opto-Mechanical Engineer, and Workpackage Manager for the Tertiary Mirror System. “The review committee recognized that the M3S CIOMP team displays the expertise and cohesion required to successfully bring the design of the M3 system to maturity.”

At the end of the two-day review, John Rogers, Chairperson, stated: “The M3S team members from CIOMP and TIO demonstrated they can develop a high-standard design for M3S. Significant design choices have been evaluated and accomplished with the expertise of computer-aided modeling and prototyping. M3S team is ready to proceed to final design.”

The second part of the M3S Preliminary Design Review is planned to take place in late 2020 and will cover aspects of system controls, safety, management and software. 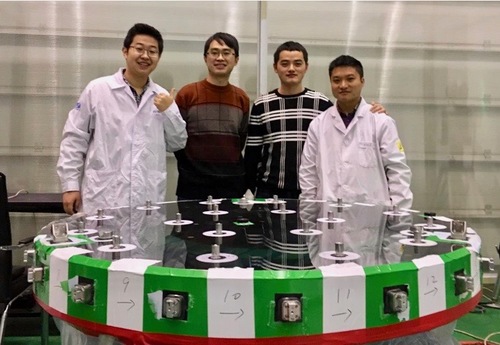